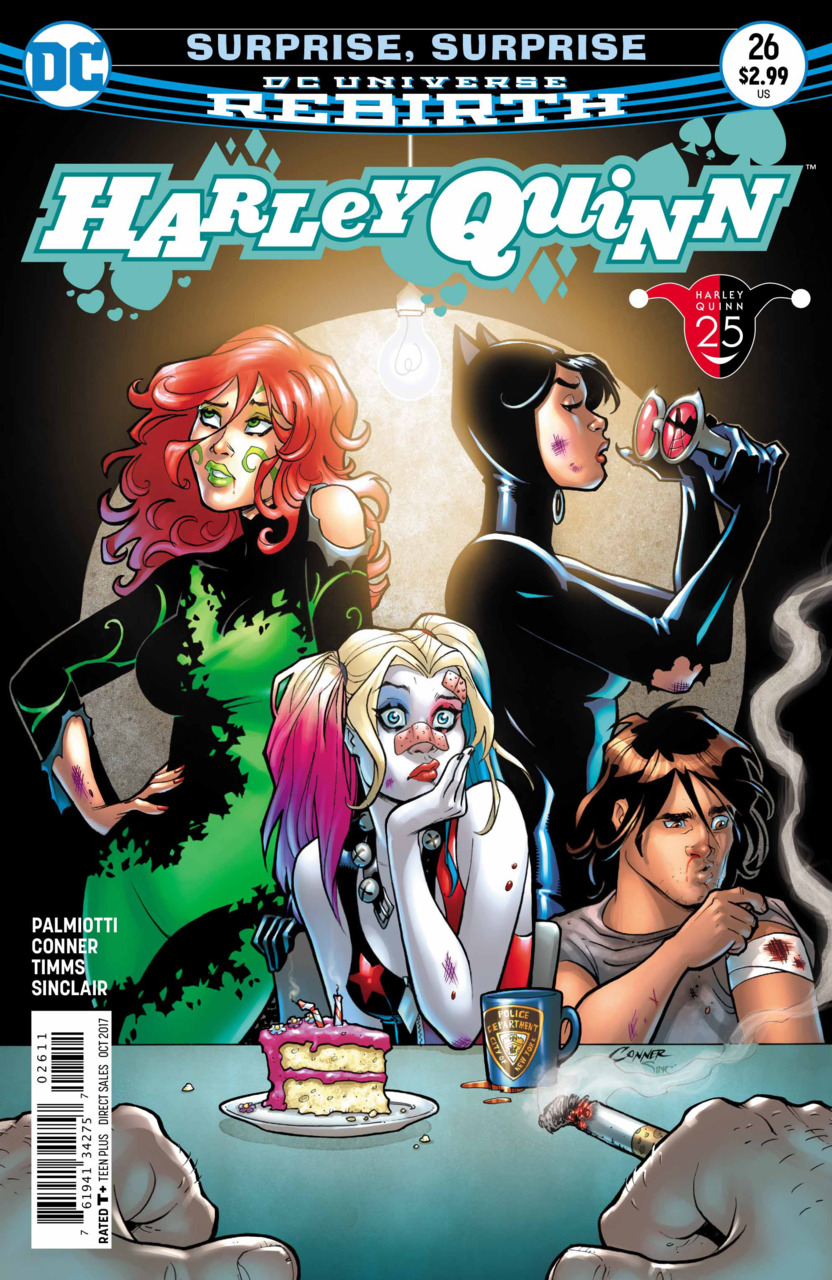 Overview: Harley’s birthday has been ruined and she’s not happy! The story flashes back to how Harley, Catwoman and Ivy escape her apartment being attacked by the Unconquerable 25.

Synopsis (spoilers ahead): Harley Quinn #26 opens up with Harley, Ivy and Tony and Police Chief Spoonsdale retelling the story to Rivera of how the Unconquerable 25 crashed Harley’s apartment and birthday. Ivy and Catwoman escape off the top of the apartment building using Ivy’s “plant powers” and there’s some amusing asides as they propel off. Meanwhile Harley has a battle royale on her hands as she must fight off a wave of the Unconquerable 25 goons, gradually escalating in their threat levels like video game bosses. As Harley fights against them, Harley Sinn frees herself from the basement of Madam Masque’s Wax Museum and throws herself into the fight, cracking the necks of the ever declining Unconquerable 25.

Eggy launches Harley at a helicopter, causing the copter to crash-land into the ocean, while Harley came to land in a truck carrying mattresses. Catwoman and Ivy are safe int he plant Ivy commanded to save them and they came out in time to catch the helicopter pilot who suffers a very painful landing.

Harley is interviewed by a news anchor, who informs her that the city owes Harley a huge debit of gratitude. Harley suggests several parades that she is available for! Ivy comments that with all this publicity, does Harley want her life to become a part of the big public circus? This triggers Harley, who loves circuses.

There’s an awkward moment between our heroic Harley and Harley Sinn who points out that they have a common enemy now, whether that’s the Mayor or his puppet Madison. Rivera announces that he has the machinery to get Harley what she wants, provided she has the team. Harley is going to run for Mayor of New York City!

Analysis: This issue, focusing on the attack of Harley’s apartment by a crack squad of goons, featured a slightly more violent and kinetic tone to the usual Harley fare and the art by John Timms was on point and magnificent. This gives a sense of drama and conflict to the finely scripted fight scenes which features some beautifully vivid depictions of violence that feel out of an extreme 90’s comic and matches the joyful energy of the title. I am still not convinced that I truly like Poison Ivy’s new costume in the comics that much – it’s drawn well here but is still not as fun as the usual one, and frankly it is quite unremarkable. That saddens me as I find Ivy quite remarkable indeed as she is one of my favorite DC characters. The appearance of Catwoman along with Ivy is always a pleasure, and I could easily read an arc with just the three on some wild adventure, “Gotham Sirens” style.

The elephant in the room is definitely the escalation of Harley’s ambition and I think that given we are approaching her 25th anniversary, with Harley’s popularity at surely an all time high with readers and within pop culture (whether that be via comics, movies such as Suicide Squad or the Arkham video games) this is the perfect time for her to ascend to a crazy new fancy accolade. We can be sure it will be a chaotic, fun-filled campaign!

In wrapping up the creative team at Harley Quinn, so well practiced at delivering the goods, deliver a home run this time out. The slick, consistent art meshes well with the fight scenes that lead into pages detailing Ivy, Catwoman and Harley, and they are a pleasure to read.

Final Thoughts: An excellent issue in an excellent run. The excitement is at fever pitch as we rush into the “Harley runs for mayor” storyline tagged as “Election Insurrection”. Any doubters should jump on this title now!