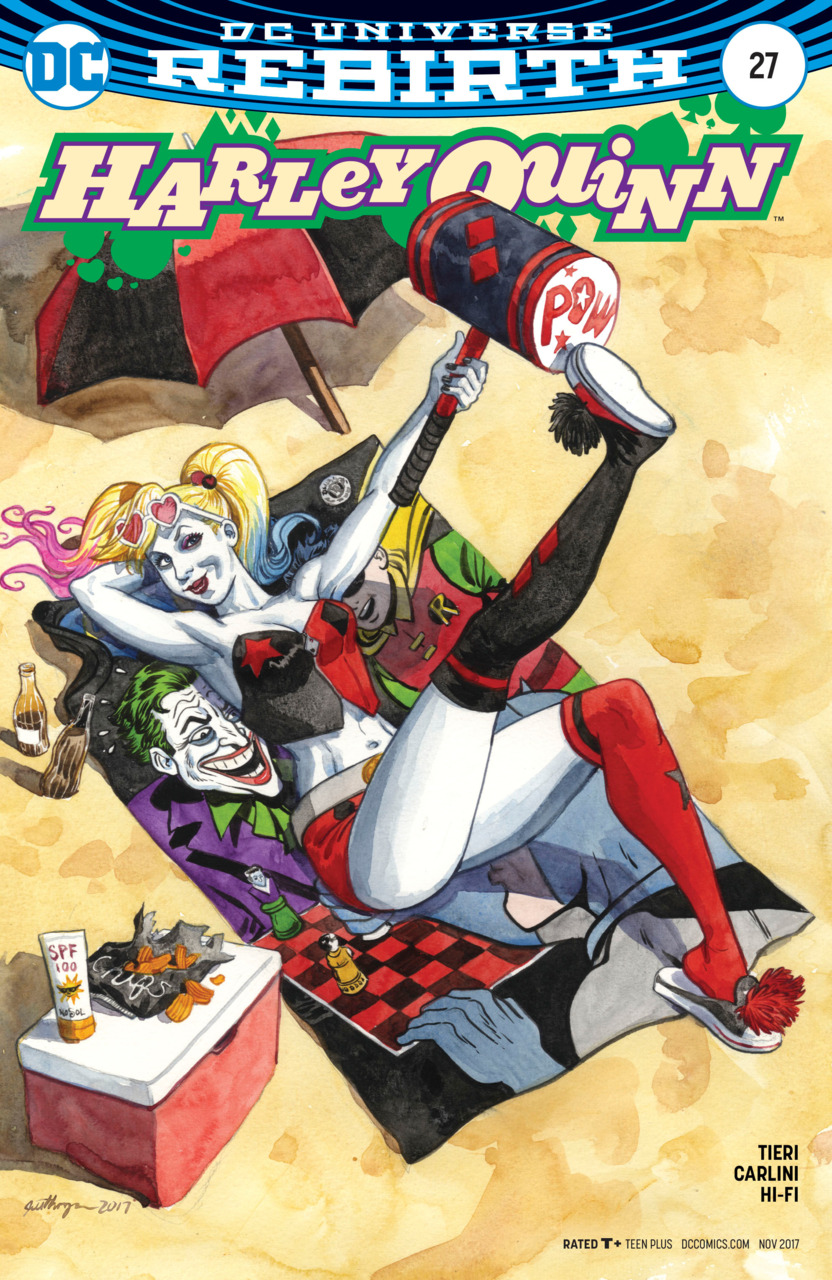 Overview: Harley tangles with the Penguin who seeks to knock over much of Coney Island to build a Casino!

Synopsis (spoilers ahead): Harley Quinn #27 opens in the roller derby where Harley has just put an opponent down for the count. As Harley says, “She called me Hurley Quinn!” Her teammates break the news to Harl that the derby rink and indeed the majority of Coney island is scheduled to be knocked down as the government is claiming it back under eminent domain laws. This includes the rink, Sy’s nursing home, AND Harley’s apartment. Tony advises Harley that behind the seizure of property is the spectre of Penguin and his Iceberg Lounge – their properties are making way for a casino.

Harley goes to meet Penguin as he eats his dinner, their meeting quickly turning aggressive as Harley pincers a lobster on his private parts! “Touch me and you’re a corpse,” Penguin mutters to the waiter.

Flash-forward to the Penguin pitching his vision of a New Coney Isalnd, when Harley squirts him with ketchup and a stirring speech of her own, about those who would be disenfranchised by the loss of Coney Island, the people who make it great – namely the hipsters, the freaks and the hookers (who would actually do better with a casino, but don’t tell them that).

Penguin sneers her down and Harley is about to dispatch a baseball bat into his distinctive nose, when a bizarre appearance of Maurice and Pierre, two gigantic mutant penguins turn up and Harley and the gang run like hell to escape. What follows is a montage of Maurice and Pierre dominating and ruining Coney Island, by hogging the rides and eating the hot dog eating contestants, before Harley comes up with a snappy idea which is to use the Joker to coerce Penguin into withdrawing his casino bid, as Penguin has already shown a distaste for Mistah J’s brand of madness. With a bit of help from Sy using a holographic projector this ruse succeed, and Harley and the gang are free to live and love another day…The final section is a piece of meta-comedy as Harley rags on the regular writing team of Amanda Conner and Jimmy Palmiottit as they are at the beach relaxing!

Analysis: The creative team of Conner and Palmiotti set the bar high on Harley Quinn and talented and consistent as Frank Tieri is, often coming in do quick turnarounds or fill-ins on books, even he would surely have some concerns about jumping in to such an established book and tone. But Tieri knocks this issue out of the park and it’s a seamless transition. You can tell he is a fan of the title from the way he gets the tone so effortlessly down. If I hadn’t known from the credits who was writing I would have thought that this was another Conner-Palmiotti joint.

The art is a change of pace coming from Eleonora Carlini and I loved it, a fresh take on the Harley character which played up her spunk level up slightly, while still delivering the costume and overall look how fans like it. The depiction of Penguin as super old and gross was delightful and played well in the story. Overall this entire issue was extremely compact and efficient – in an age where we are endlessly told that one-shots are impossible in a modern comic this is a one shot that worked to a tee AND still fit in an amusing joke at Amanda Conner and Jimmy Palmiotti’s expense, as they sunned their no doubt exhausted asses on a beach to get away from the bi-weekly grind of the title for just one issue! Reading this I’m more convinced than ever that Frank Tieri, whose work I have always enjoyed across a number of title from Deadpool to Catwoman to Black Knight, should be directing the traffic on a major book at either of the Big Two.

Final thoughts: Frank Tieri slides with ease into the Harley Quinn creative team with a good, solid issue that sells itself on the series key strength – the quirky, feisty spirit of Harley, who doesn’t back down from a challenge! A very enjoyable issue which ends with a laugh.