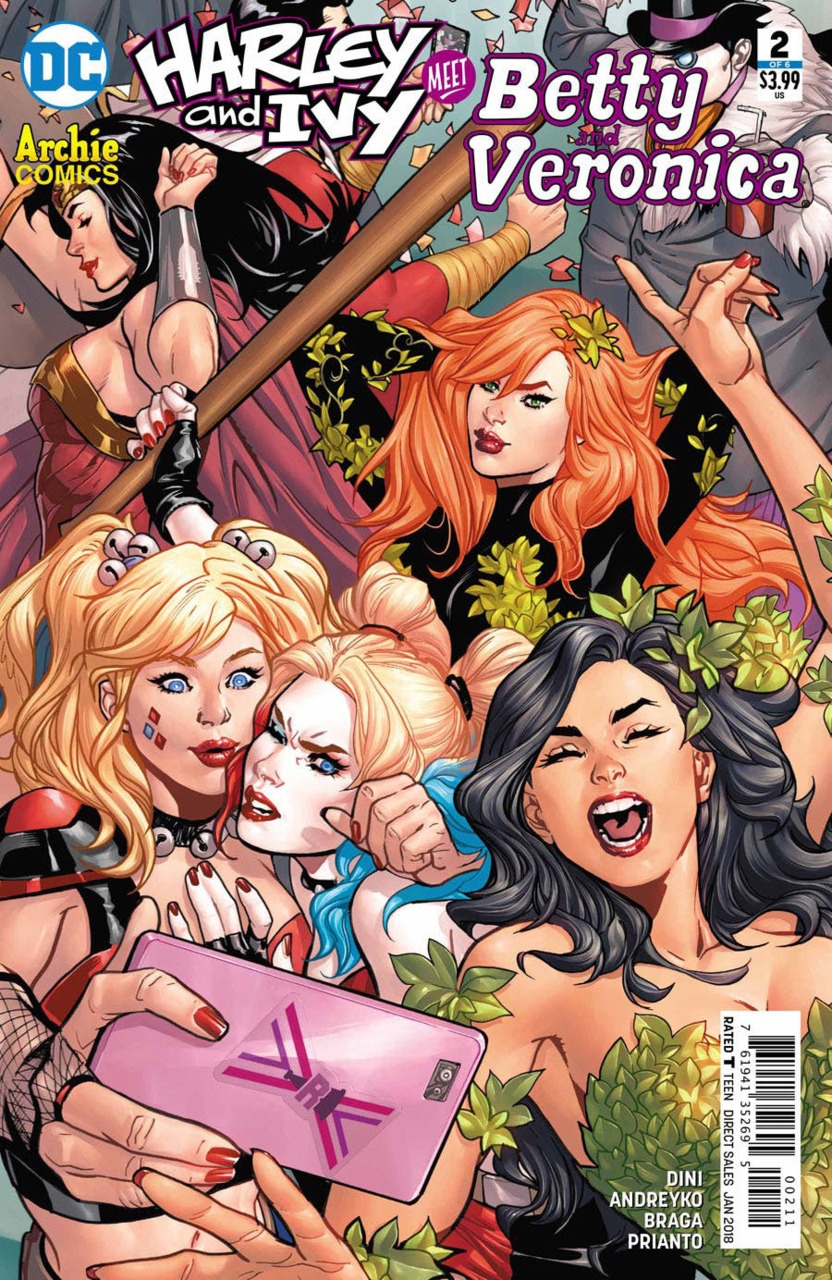 Overview: Harley and Ivy infiltrate a Lodge House Party to encourage Hiram Lodge to stop an eco-destroying building project, but the pair are confronted by their doppelgangers – a costumed Betty and Veronica.

Synopsis (spoilers ahead): Some of Poison Ivy’s past victims, including Lenny the Lamprey, want revenge on our red-headed eco-warrior for transforming them into ridiculous ‘super’ villains. They decide to search in the last place they’d ever think to look.

Harley and Ivy are at a Hiram Lodge costume party in Riverdale. The pair are in older versions of their costumes and confront Betty and Veronica who are dressed in their modern garb. Ivy has given the Butler Smithers a concoction to make him her slave. Veronica is able to break the spell on her family Butler. Harley and Ivy decide to change clothes and now match Betty and Veronica’s outfits.

Zatanna is the guest Magician at the party much to the delight of Sabrina, the teenage witch. Zatanna introduces the band Josie and the Pussycats who have a fan in the audience – Selina Kyle.

Reggie is dressed as Joker and flirts with Harley who prefers pudding the food over Puddin the fake. They realize Selina is at the party and chat. Selina warns Ivy about Lenny the Lamprey and Ivy assures her that she can handle him.

Betty overhears the conversation and realizes that the real Harley and Ivy are in Riverdale. Betty tries to warn Veronica but her Ivy-clad schoolmate is too wrapped up by having her costume copied to listen. Veronica attempts to confront our heroes, but Ivy ties her up in some vines. The always resourceful and athletic Betty is able to free her friend and fight off Harley. The four young ladies start to fight.

Sabrina and Zatanna are able to stop the battle and switch the bodies of real/fake Betty/Veronica/Harley/Ivy. Selina tries to take her friends back to Gotham, but drives away with Betty and Veronica instead who realize what is happening too late.

Analysis: Writers Marc Andreyko and Paul Dini have put together an interesting concept for this story. Betty and Veronica and Harley and Ivy fight, swap bodies, and generally cause much mayhem as usual. There are a lot of small side plots which are primarily Easter Eggs to the main thrust of the story. Unfortunately at this point of the story these little gags all seem to go nowhere. Some of these include the Smithers hypnosis, Pureheart the Powerful, Zatanna and Sabrina, Miss Grundy as Solomina Gundy, the Groovie Ghoulies and more.

Artist Laura Braga does a fair job in laying out her panels and pages. However, many of the faces look crude and off kilter. And, while having Betty and Veronica dressed exactly like Harley and Ivy, and then have their bodies switched sounds like a wild, fun idea, in practice it is very confusing. With some work you can figure out who is who and some might find it fun while others might just get frustrated.

Final Thoughts: I was very hard on this book in my review of #1 because Betty and Veronica didn’t seem to like each other at all. In this issue that problem is much less prevalent. I feel like the story is setting up to be a good one, but isn’t quite there yet. It appears that Selina is bringing Betty and Veronica to Gotham and the two River Vixens will get mixed up with Lenny the Lamprey and his cronies. Will they need to be saved or will they be able to handle things on their own? I am interested in finding out, but at this point the story is too meandering for me to be truly engaged. I’ll keep reading and hopefully the story will keep getting better. I hope.