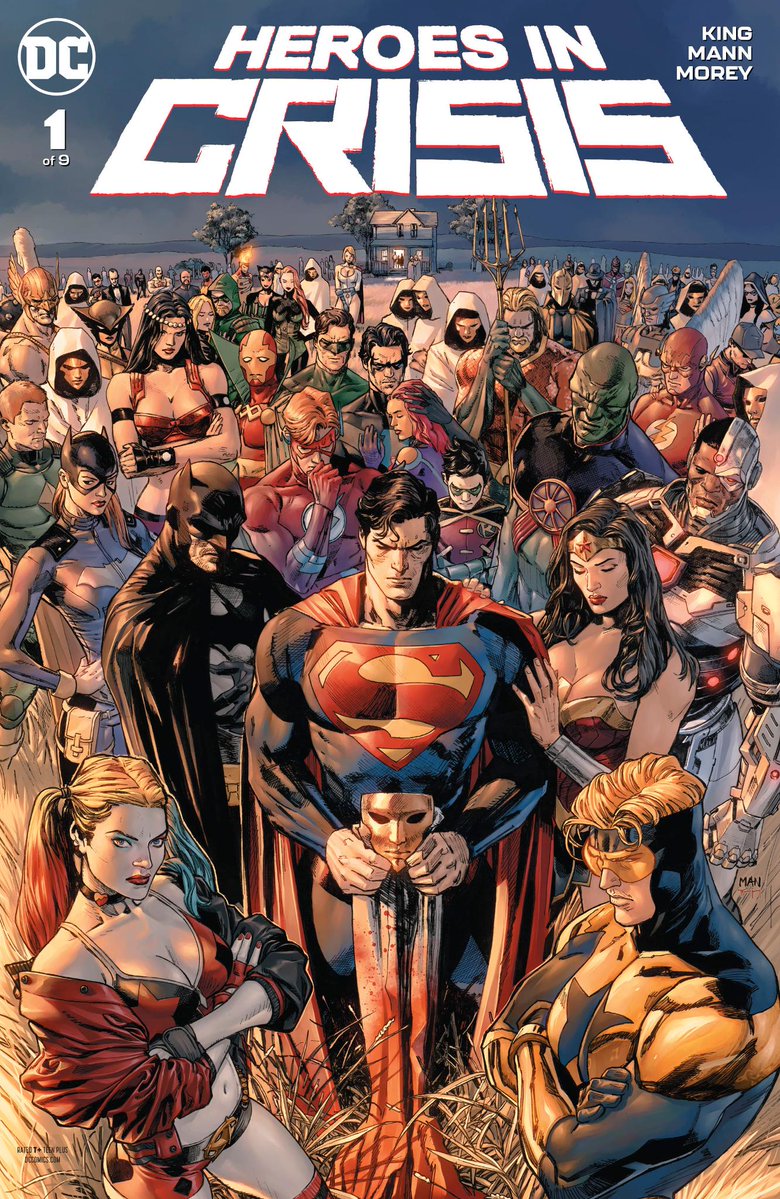 Overview: Booster Gold and Harley Quinn fight over their diverging recollection of the tragedy at Sanctuary as the Trinity race to the scene of the crime to investigate.

Synopsis (spoilers ahead): Booster Gold is at a cafe in the middle of nowhere getting a meal when Harley Quinn walks in.

Superman flies over open fields as we see a session with Harley Quinn while she was at Sanctuary.

Back at the cafe, Harley orders something to eat and strikes up a conversation with Booster Gold while they eye each other warily.

Superman arrives at Sanctuary and we see a flashback session with Blue Jay from when he was there.

Back at the cafe, Harley instigates the fight by stabbing Booster Gold.

Wonder Woman and Batman are en route to Sanctuary and they talk via comm to Superman who surveys the scene. We also see a flashback session with Hot Spot from Sanctuary.

Booster Gold and Harley Quinn continue fighting and they take their battle to the skies as Booster takes flight.

Superman enters Sanctuary and finds the dead bodies of Roy Harper and Wally West. We also see a flashback session with Arsenal. Batman and Wonder Woman join Superman inside Sanctuary and they conclude that someone who was treated at Sanctuary is the murderer.

Booster Gold and Harley fall from the sky because Harley stabs Booster with a knife. He saves her from falling to her death and they both say that they saw the other person killing the people at Sanctuary. The issue ends with a flashback session of Booster Gold at Sanctuary.

Analysis: Before I get into the many things I LOVED about this book, I want to briefly mention a few things that concerned me. I was (and am) excited for this miniseries because it’s Tom King writing a book about superheroes dealing with mental stress, trauma, and PTSD, and I think a story like this has loads of potential. However, I’m not sure why DC editorial felt the need to convert that story into a “Crisis” where major heroes die because the story would still work without it.

My next concern is regarding one of the major deaths revealed in this issue. This particular character was supposed to usher in the lighter, more positive Rebirth era where relationships would be re-established and heroes would be allowed some modicum of happiness. The choice to kill this character is especially confounding in light of this. I’m not mad that major characters have died because at the end of the day this is comics and I know they will be back soon. However, I am really concerned that the promise of Rebirth will go unfulfilled with moments like these.

All that being said, this story is a supremely well-crafted issue that lives up to all the hype and anticipation. Tom King’s scripts are typically concise and powerful and he continues in that vein in this issue while also really showcasing a good handle on the characters’ individual voices. I’ve found that oftentimes what King’s characters don’t say, is just as important as what they do say. This works best when paired with a great art team; and Mann, Morey, and Cowles deliver such exquisite art that complements the script. The synergy between how the characters are written, the subtext of what is said “between the lines” and how they are depicted in the art unlocks an additional layer of meaning for the reader. It’s also a testament to the chemistry of this creative team that everything fits so well together.

The nine-panel grid pages featuring characters giving monologues, presumably during an intake or counseling session at Sanctuary, gives the reader insight into the characters as well as a shocking contrast to what happens on the following or previous page. My favorite example of this is when we see a panel of crows eating what appears to be a dead animal with something blue attached as Superman flies overhead. Then on the very next page, we have the hero Blue Jay talking about how he can’t control his shrinking powers. The latter page recontextualizes the previous page in such a shocking way that fills the reader with the appropriate amount of horror and dread for what Superman is about to find at Sanctuary.

Speaking of Superman, he’s the first to arrive on the scene and struggles to find words for what he’s seeing. The first panel at the bottom of the page has the reader looking up at Superman. He looks like how we all imagine Superman to be; strong and surrounded by golden sunlight like some kind of halo. Then the perspective shifts on the next page so the reader takes on the point of view of Superman looking down on the carnage beneath him. The story continues to show Superman’s point of view right up until the wide panel of him alone in a cornfield struggling to remember Hot Spot’s catchphrase. The image of the Man of Steel on his knees, alone, struggling for words and visibly shaken in the middle of an environment that should feel like home to him is an incredibly powerful image. This is another example of that perfect synergy of writing and art that I referred to earlier.

Batman and Wonder Woman join him inside Sanctuary later and, while their reaction is relatively muted compared to Superman’s on account of them being hardened warriors, they showcase their grief and anger in other ways. Wonder Woman bends down to touch the dead hero’s head and gently close his eyes; giving him the respect and compassion of a fellow warrior. Batman hides his grief by distancing himself from his friends and turning it into anger and determination to find whoever is responsible. That one line about hope, redemption, and vengeance speaks volumes about the character. I think Batman wants to (and does) believe in redemption for people but is so disappointed with the world constantly proving him wrong. That line with the brilliant shot of him turning over his left shoulder in the rain perfectly encapsulates this.

The Harley and Booster Gold conflict is the big cliffhanger in the issue. Both seem to be under the impression that the other person killed the people at Sanctuary. I think there are two possibilities here. The first is that one of them is lying (even if it is unintentionally). The second possibility is that an unknown third party is manipulating them to create a scapegoat and cover their own crimes. The first possibility presents an interesting dilemma for the reader that will test their own ideas about rehabilitation and redemption. Will you believe the former psychiatrist turned villain or the former thief turned hero? Is Harley trying to cover her tracks by attacking Booster or does she think this is her chance to be the hero? Is Booster trying to run from his problems or is he simply ashamed of his inability to stop what happened? The line between hero and villain gets blurry here and it’s a call back to the conversation the cafe patrons have about Booster and Harley on the first page. The nine-panel grid pages of Booster and Harley make this choice even more difficult than it already is.

I probably didn’t talk enough about how phenomenal the art is in this issue. The way Mann builds different environments and settings as well as how he draws characters and facial expressions really are something special. That last detail is important in a book with nine-panel grid pages that effectively serve as one on one conversations with the reader. Morey’s colors are so rich with such a great attention to detail. A great example of this is the last page of the issue where the gold part of Booster’s costume is subtly colored differently in every panel to reflect how the light reflects off it when he moves. Cowles’ lettering is so deftly handled that I “heard” so many of the sounds instead of reading them off the page. The level of immersion is so complete that the reader experiences everything from the ringing of a bell, to coffee being poured to a knife being drawn as if they are right there. Simply a virtuoso performance from the creative team at the peak of their abilities.

Final Thoughts: A “must read” issue that delivers on the hype and sets the stage for what promises to be a thrilling story.