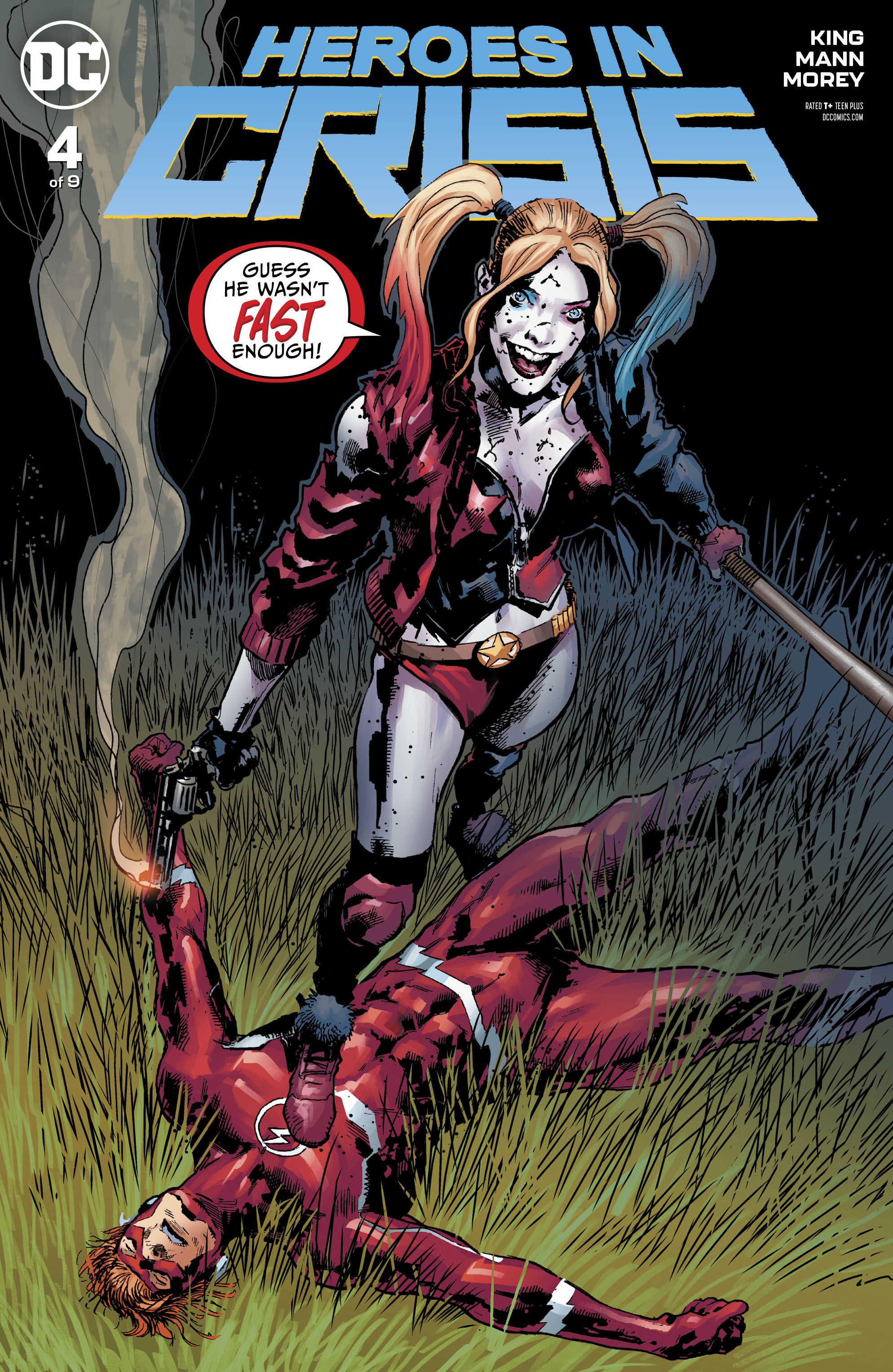 Overview: Sanctuary is no longer a secret!  While the Justice League takes their time investigating the murders, Lois is forced to take action and unlikely alliances are forged.

Synopsis (spoilers ahead): Tempest passes out drunk at a bar reminiscing about the Titans.  Donna Troy carries him out of the bar on her shoulder as she passes by a graffiti mural of the former team.

Donna Troy has a session in Sanctuary where she muses about the legend of the Trojan War and if it actually happened or not.

At Sanctuary, the Flash and Batman are conducting investigations into who committed the murders and come up with different results.

Booster Gold is questioned by Wonder Woman and he gives his version of the story under influence of the Lasso.

Lois and Clark have a discussion in their bedroom about the leaks being delivered to Lois from the mysterious Puddler.  Lois says she will have to do something eventually while Clark doesn’t know what to do.

Batgirl has a session at Sanctuary where she shows the entry and exit wound from when the Joker shot her.

Elsewhere, Batgirl tracks down Harley in a hall of mirrors.  Harley thinks she is there to fight, but Batgirl is just there to talk and try to help her.

Black Canary and Green Arrow make a call to Batman and Flash where they express their impatience with how long the latter two are taking to solve the case.

Black Canary has a session at Sanctuary where she swears and storms out.

Ted Kord visits Booster at the Hall of Justice where he has been told to stay put by Wonder Woman.  Ted Kord uses his beetle tech to break Booster out of the Hall.

We see a session Ted Kord had at Sanctuary where he talks about how good a friend Booster is to him.

At the Batcave, Superman reveals to Batman and Wonder Woman that Lois has been getting video leaks about Sanctuary from The Puddler.  Batman is angry that Superman has known for days and hasn’t told them.  Superman responds by saying he’s telling them now because Lois just published the story.

Harley and Batgirl race across the rooftops as Batgirl finds out the story is out there.  Harley is happy because “the world needs changing”.

Analysis: This is yet another outstanding issue from this creative team.  I will say that it took me two readings to reach that conclusion because I simply did not pick up on many of the subtleties the first time around.  The sessions in Sanctuary are again used to masterful effect by King.  Donna’s musings on the veracity of the legend of Troy is very much her talking about herself and her origins.  If you’ve been following the character in Titans, then you’ll know this has been a major plot point for her fairly recently.

Batgirl’s session doesn’t really have the character saying much because not much needs to be said.  Showing the physical scars of the wound that has had such an impact on her life spoke volumes.  The way the panels are structured to show how vulnerable she feels in that moment is so well done.  The panel in the middle of the page makes it look like she’s hesitating and steeling herself for what she’s about to reveal.

Ted Kord’s session was a great commentary on the value of having a friend who is always there for you.  It also indirectly touched on how this can also turn into a dependency when Kord talks about how he “needs” Booster around.  Placing this scene right after Kord helps Booster escape makes the reader really wonder about Kord’s state of mind and motives after he has done that.

Booster Gold taking the “Lasso test” was another great way of showing how there is no foolproof way of determining who is telling the truth.  Booster may believe he’s telling the truth and is able to pass the magical polygraph, but that doesn’t mean he’s innocent yet.

I absolutely loved the scene with Harley and Batgirl!  Having the interaction take place in a hall of mirrors was a great way to pay homage to the canon while also serving a narrative purpose.  While the discussion is playing out between them, it’s almost like the mirrors use physical space to show that these are three-dimensional characters that have ups and downs like everyone else.  Batgirl holding Harley’s punch and it gradually turning into them clasping hands and then a hug as Batgirl explains she’s there to help was a touch of genius.  The shattered mirrors on the ground as they hug perhaps represents how they have moved past the different masks and identities they wear to their true identity and found a commonality in that true identity.  It’s a beautiful statement that perhaps people in pain just need a hug and to know that someone else truly understands and believes in them.

The scene with the Trinity in the Batcave really captured all their individual personalities and how frustrated they’d all be feeling with such a high-pressure situation.  King also utilizes Batman’s dry humor to great comedic effect.  I actually laughed out loud when I heard Batman drop one-liners about his dinosaur and using “corn-fed” as an insult to Clark.  It brought a little levity to an otherwise serious moment.

The art in this issue is absolutely stunning.  I really have run out of words to compliment Mann and Morey’s work on this series.  This issue is a special treat for fans of these characters.  The graffiti mural alone had me so excited for what was to follow in the rest of the issue.  The page of Canary and Oliver looking out over the sea as the waves crash into the rocks looks like it wouldn’t be out of place in a museum dedicated to the great art of the 21st century.  It’s really hard to not feel that way about so many of the panels in this book.  The panel where Batman points his finger right at Superman’s chest is gorgeous and also simultaneously a microcosm of the antagonistic aspect of their relationship in many ways.

I would be remiss if I ended this review without commenting on the Lois page that has generated much controversy amongst fans.  Unfortunately, much of this involves negativity and sometimes outright harassment directed at the creators of this book.  I do not wish to add to this toxic atmosphere, as that behavior has no place amongst decent people, but I would like to offer a critique that is hopefully well reasoned and respectful.  I do think Lois’ pose on that page didn’t really fit with that moment in the story and it kind of took me out of it just a bit.  I want to note that I have no objections to her attire, as I’m not against artists depicting characters showing skin, and Mann also shows Clark in his underwear so it’s not like he’s only showing women.  But the pose coupled with the dialogue (“What do you want me to do?”) and how she looks directly at the reader did feel a bit over the top.  If the context of the scene was different, if Lois was trying to be seductive towards Clark for example, I would have felt that the pose was fine.  I want to add that I do not think any creator associated with this book is sexist in any way and I think their overall body of work speaks for itself in that regard.  I have really enjoyed King and Mann’s work on this series and I look forward to reading the rest.  It’s sad that I felt the need to write such a detailed breakdown of this, but I just wanted to offer my opinion on this page and I hope I have explained myself clearly and respectfully.

Final Thoughts: An outstanding issue that really captures the personality and multifaceted nature of these great characters.