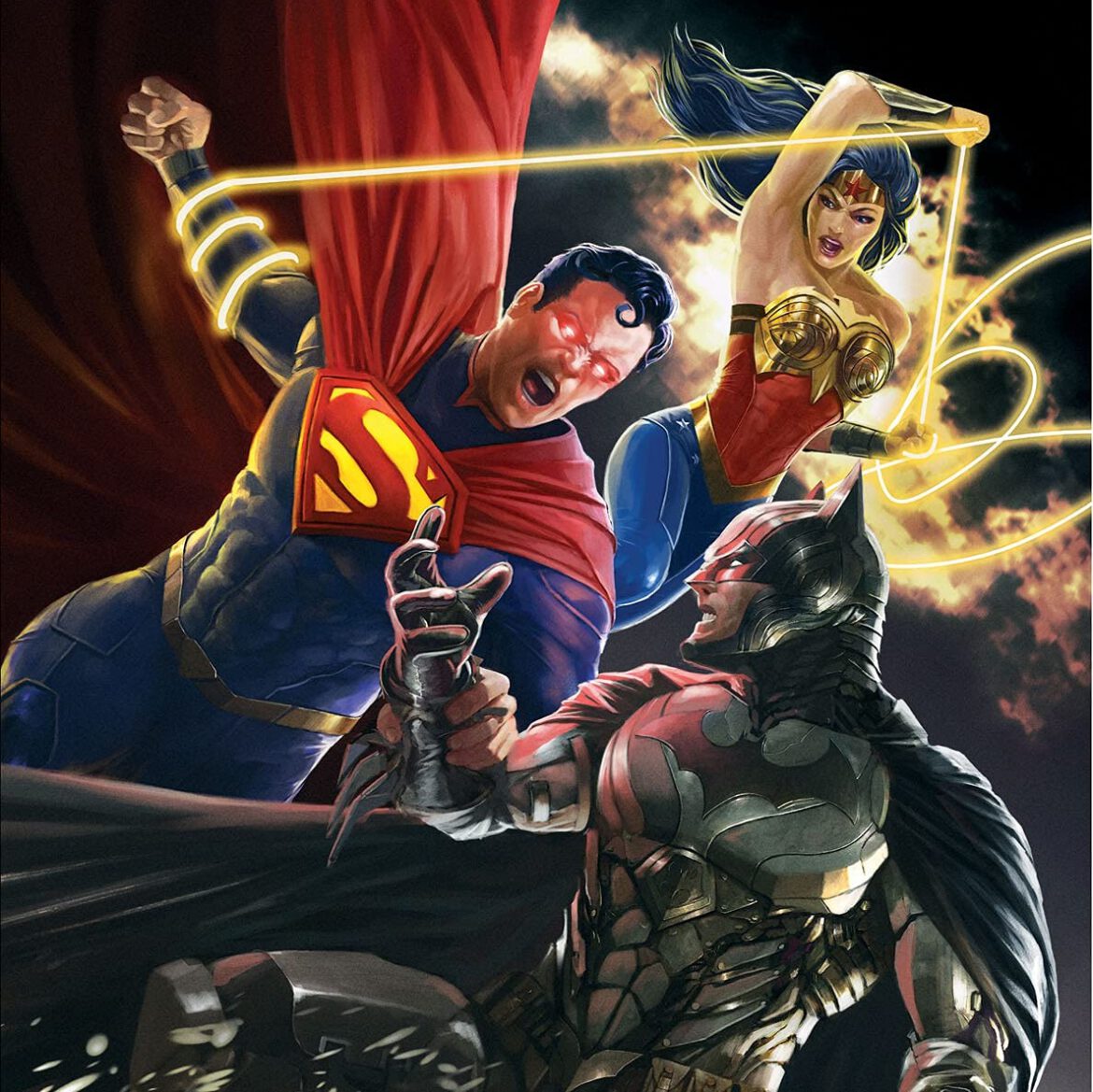 Overview: Injustice started out as a popular video game, which earned a sequel and a well-received comic book run written by Tom Taylor. Now, the story has been adapted into an animated movie. It is very rare for any franchise or comic property to reach the trifecta of video game, comic, and movie. Injustice can now say it has.

Synopsis (spoilers ahead): As Injustice begins, Clark Kent is lying in bed with his wife Lois Lane one morning when he hears two heartbeats coming from her. Lois is pregnant. As they are discussing it, Clark hears that Batman is in Metropolis. Superman goes to see him and tells Batman that Lois is pregnant. Batman congratulates him and informs him that Joker is also in Metropolis.

Lois and Jimmy Olsen are at the docks on assignment for The Daily Planet when the Joker kills Jimmy and kidnaps Lois. Superman alerts Batman, and Batman puts a call out to the Justice League to find Lois. Flash finds Scarecrow dead in a secret lab before being killed by a trap by the Joker. Wonder Woman discovers that Joker and Harley Quinn were last seen in a submarine. Superman finds the sub and notes that a warhead is missing. He breaks into the sub and discovers Joker with Harley and Doomsday. Superman fights Doomsday and takes the fight up to space. Batman notices that there is fear gas mixed in with Kryptonite in the sub and tries to tell Superman that whatever he is seeing is not real. However, it’s too late. It wasn’t Doomsday that Superman saw. It was Lois. She is dead, and there is a device attached to her heart which was connected to the missing warhead. It sets off an explosion in Metropolis that kills eleven million people.

Batman has taken Joker to interrogate him as to why he decided to mess with Superman, and Joker explains that he was tired of losing to Batman and wanted to try something new. Superman arrives and punches a hole in Joker’s chest in front of a shocked Batman.

As Green Arrow takes Harley to his lair to hide from Superman, Superman reveals his identity in front of the United Nations and speaks on how he will try to bring peace to Earth. If he has to use force then so be it. The Justice League is divided over Superman’s announcement. Some decide to stay with Superman, such as Wonder Woman and Cyborg. Some decide to stay with Batman, while Aquaman and Shazam want to stay out of it and leave the League altogether.

The US government is concerned with Superman and hires Mirror Master to kidnap Jonathan Kent, Superman’s father. With help from Wonder Woman, Superman is able to rescue his father while Batman tells the President of the United States that it was wrong to mess with a man’s parents.

Superman arrives in Gotham with the Justice League with the intention of taking the super criminals in Arkham and locking them up somewhere else. Batman and Nightwing arrive to stop them, but the inmates escape. Batman and Superman put their differences aside to put the criminals back in their cells. During the fight, Robin, who has joined Superman’s side, accidently kills Nightwing. Batman is horrified and disowns Damian. Superman lets Catwoman know that Bruce will need him now that he is alone. Meanwhile in the afterlife, Nightwing is granted the powers of Deadman and becomes “Deadwing.”

Superman forms an ally in Ra’s al Ghul who also shares his vision for peace in the world. While flying through Gothman one night, Superman stumbles upon a party involving people that worship the Joker. Superman violently kills them all, and Batman decides that Superman has to be stopped. Batman and his team of Catwoman, Plastic Man, Green Arrow, Mr. Terrific, and Harley Quinn plan to break into the Fortress of Solitude and steal a red sun cannon that can take away Superman’s powers. Batman leaks the footage of Superman killing the people that worship the Joker, and Wonder Woman starts to question Superman.

Ra’s shows Superman that he has been working on a robot called Amazo that can help Superman on his mission. Superman allows Amazo into Smallville for a test drive, but the machine quickly turns dangerous. Ra’s has secretly programmed Amazo to kill Superman. Robin discovers this and tries to stop his grandfather. Robin succeeds with the help of Deadwing. Deadwing forgives Robin and tells him there is still time for him and Batman to repair their relationship.

Batman and his team arrive to help Superman and Wonder Woman stop Amazo. Amazo has already killed Hawkman and Cyborg. During the battle, Mr. Terrific is setting up some type of portal device and goes in it. The heroes are able to destroy Amazo, but despite Batman’s help, Superman wants to still arrest them. Wonder Woman disagrees and Superman dismisses her. As he turns his sights on Batman, he is stopped by a big red S. Mr. Terrific went into the multiverse and brought over the classic, red underpants Superman that we all know and love.

The two Supermen battle it out all over Smallville. The Injustice Superman gains the upper hand but stops after he is confronted by another Earth’s Lois Lane. That Lois is pregnant and alone after her Superman died fighting Brainiac. She reminds Injustice Superman that life is very sacred. Injustice Superman is overcome with emotion and surrenders. He agrees to be imprisoned and will no longer fight. Batman kisses Catwoman and grins as he looks forward to the future.

Analysis: DC has drained every last bit of blood of the Injustice franchise. The movie never slows down and seems to go at a breakneck speed because there is so much story to fit in its one-hour and eighteen minutes run time. The beauty of the Injustice comics, particularly the first volume of the Injustice: Gods Among Us comic, is the small character moments when you get each hero’s opinion on if they believe in Superman’s new cause or Batman’s. That is not a knock on the movie, but you are just not going to get those moments when you have so much story to fill.

The animation felt very regular. Nothing special. It felt like the same animation as the Batman Unlimited animated features. With a story like Injustice I expected more dynamic fight scenes between the heroes, but it never quite reaches that expectation for me.

The voice cast is okay. Justin Hartley from Smallville and This Is Us fame voices Superman and does a fine job. I do wish he did a better job conveying the struggle Superman might have with deciding to enforce peace the way he wants to. Anson Mount voiced Batman and really made no impact. Just the classic gruff, deep voice as Batman.

Editor’s Note: Injustice is now available on Digital HD, Blu-ray, and 4K Ultra HD. You can order your copy, and help support TBU in the process, by heading over to Amazon.

This feels like DC getting the last bit of money from the Injustice franchise. The movie is very cookie cutter in every way from the animation to the voice cast.