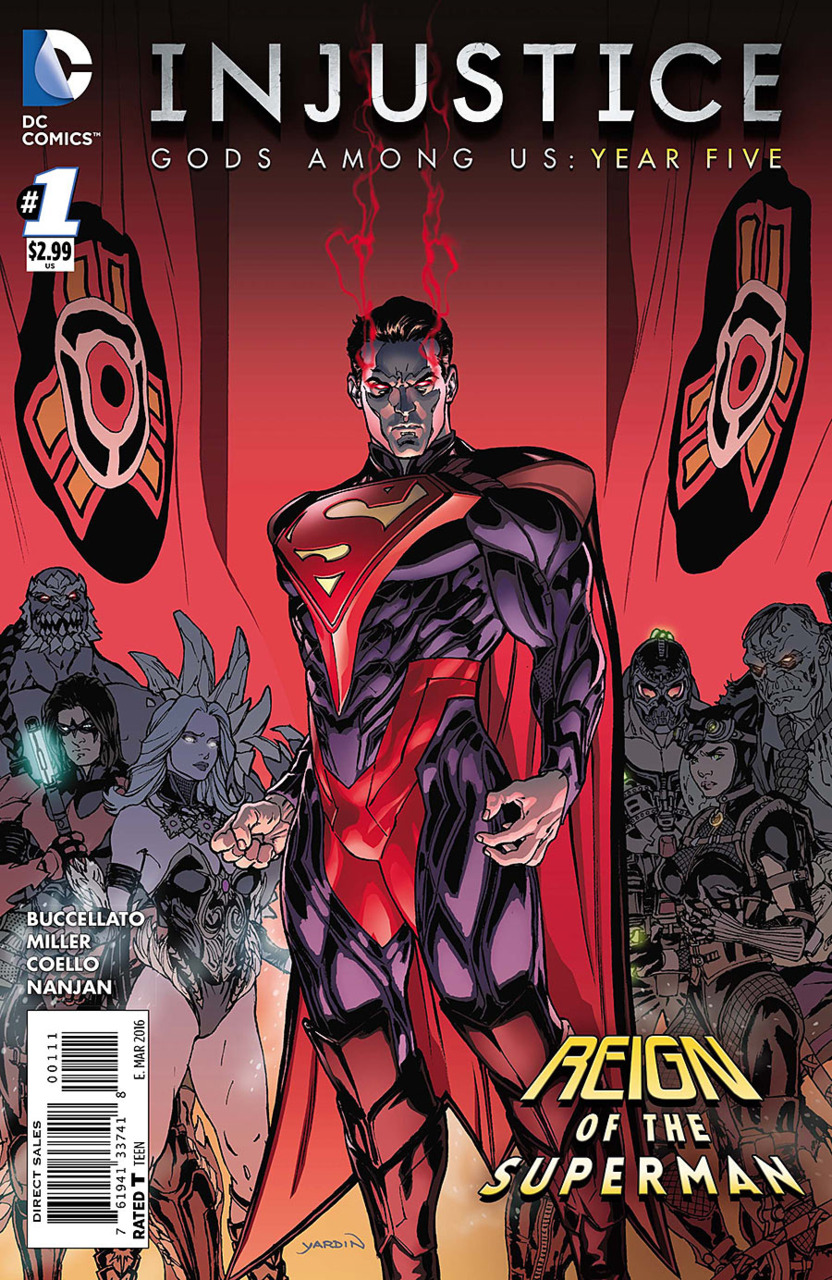 Synopsis: This year begins with Superman surveying the destruction of a prison that held the world’s super villains (or at least the enemies of Superman). It is revealed that it was Plastic Man who is responsible for this act and now all members of Superman’s Regime have to focus on rounding up all the fugitives.

Over the next few pages we see various characters’ dealing with the aftermath of “Year 4”. Hal is shown battling the Parasite while Flash is trying to recapture a number of escapees. Diana is also shown on Themyscira discussing the losses they suffered in the battles between the Regime and the Greek gods. Diana’s mother urges her to return to Superman and stand with him. In the Catacombs of France, Batman is able to recruit the Rogues (Flash’s main villains) into his Insurgency.

Returning to Metropolis, Flash is overwhelmed by a number of escaped villains until Superman shows up to “assist”. As they are talking, Doomsday barrels down from space stating that he “lives to kill Kal-El”. Just before landing on Superman, Flash pushes Superman out of the way and takes the full brunt of the fall.

Continuing in chapter two, Bruce Wayne and Selina Kyle are in Paris discussing Bruce’s war against Superman and his current plan is to recruit every super hero and villain to take on the Regime. Selina points out that no matter what Bruce’s plans are, nothing on Earth can completely beat Superman.

Returning to Metropolis, Superman begins his battle against Doomsday. He alerts Cyborg that Flash needs an emergency evac after having his leg broken by Doomsday and that more League members are needed to handle the fugitives that surrendered to Superman.

Hal is still fighting the Parasite when Cyborg issues the call to the League to help Superman. Hal, however, is in need of assistance as well so Cyborg volunteers to help him take down the Parasite. They both agree, despite their combined efforts, that they will need Superman to completely subdue the Parasite given his experience with the villain.

This chapter ends with the fight between Superman and Doomsday traveling to Gotham and Superman saying that he will find out who brought Doomsday back. Overlooking the fight, Bane announces that he is “not too late for the party”.

Thoughts: This being my first review of the Injustice series I want to give my quick review of the series thus far. The first two years of the series were really exciting and a great take on this parallel Earth. Each year following has brought my interest level down. That being said, it’s still a great series and I have been looking forward to seeing where Year 5 will take the story.

One of the reasons I had lost interest in the series since Year 2 was due to the portrayal of Superman. Over the last few years, I feel like the writers have flip-flopped that portrayal by randomly making him show remorse over his actions. After killing various heroes like Green Arrow and Black Canary while also destroying the Green Lantern Corp, I was convinced that there was not much chance of seeing remorse from Superman following Year 2, which was not the case in the last two years. One thing I am excited for after reading these first two chapters is that they are giving us the “tyrant” Superman. He seems furious over the prison break and the huge task ahead of him and his Regime. This can only lead to more dark moments for Superman in the coming year.

On the Insurgency side of the story, we begin to see the seeds of tension grow between Bruce and Selina. It is nice to see a character that agrees with Batman’s war with Superman but not really care that Joker was killed by Superman. Despite some tension there, the prison breakout certainly sets up a very exciting year. Batman allying his Insurgency with all the supervillains of the world against Superman’s Regime will make for a great premise for Year 5.

The artwork from Miller and Coello delivers some fantastic action scenes as well as great facial expressions. With the first issue having multiple scenes open up onto characters’ faces, it was crucial that the artwork convey the struggle and intensity bottled up in these characters who have gone through so much over the last five years.

Overall, Year 5 is starting off on the right foot and I can’t wait to see where it goes from here.