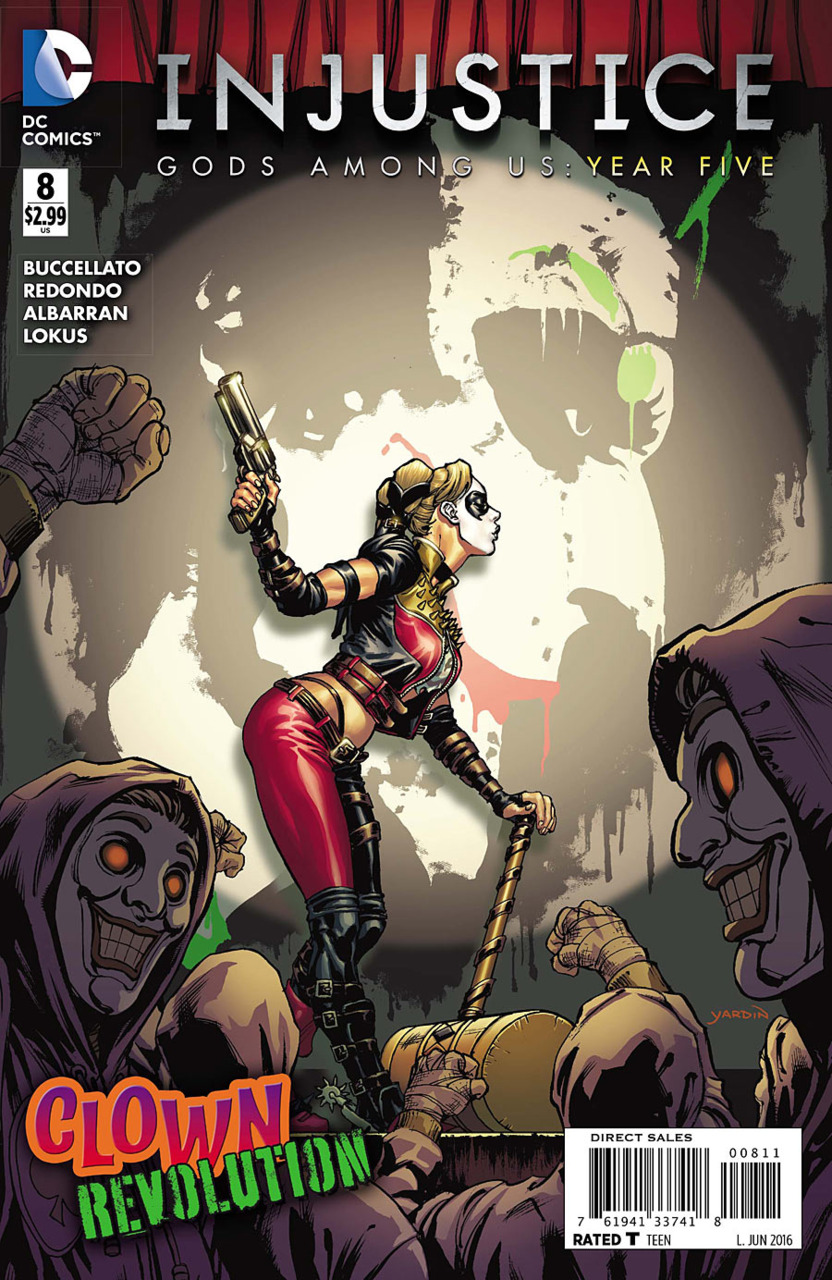 Synopsis: In the Hall of Justice, Superman and Cyborg are going over the numbers and determining how many of the escaped supervillains are still at large. Clark is also trying to determine which of the already captured inmates would be suitable for “reconditioning” so as to increase the Regime’s strength. Cyborg has determined a number of villains that fit Superman’s specifications. Cyborg also informs Superman of a growing movement against the Regime made up of normal citizens. They are, however, banding together in the name of Joker. Superman orders Cyborg to find these rebels.

Meanwhile, Alfred and Bruce share a few sentimental moments over a video chat. Alfred tells Bruce how similar Damian has become to both Nightwing and Bruce.

Broadcasting across the country, Superman creates an executive order which disbands public assembly and, namely, those rebelling using the Joker’s name. Angered by the announcement, a chapter of the Joker Underground movement get together to talk about how best to fight the oppression of the Regime. Batwoman shows up to try and talk sense into these people. She reminds them that the Joker was a mass murderer and should not be idolized. Batwoman then points out Harley among the crowd and tries to get her to come with her. The Joker members, however, are not about to let Batwoman take away Harley from them.

Returning in Chapter 16, Batwoman is surrounded by a mob of Joker idolizers who refuse to let her take Harley away. Batwoman asks Harley if even she is okay with the Joker being a symbol for freedom and revolution. Reluctantly, Harley agrees that the Joker was no hero. Some of the people attack Batwoman which does not go well for them.

At the Hall of Justice, Cyborg informs Superman that he has located the Joker rebels. Cyborg tries to offer assistance from other Regime members but Superman insists that he will deal with it.

In Gotham, Harley is able to get the rebels to disarm and discuss whether or not they want to join Batman’s resistance the “right way”. The leader of the rally agrees to talk this over with the people and Harley tells him that they will be in touch. As soon as Batwoman and Harley leave, Superman shows up and demands to know why they have assembled in the name of Joker. The people chant “Joker” as the leader tells Superman that they are free citizens and have their rights.

The issue ends with Batwoman and Harley driving away wondering if the people will join them when they see fire erupt from the building they just left. Inside, Superman is incinerating everyone at the rally.

Thoughts: Despite some funny dialogue from Harley, this issue was not doing much for me until that ending. The way in which the creative team introduces the Joker Underground felt too out of place. However, the issue redeems itself with the last few explosive panels showing us Superman destroy everyone at the rally. This issue certainly advanced some plot points and is getting the plot moving forward to meet the timeline of the video game.

The one aspect of this issue that took me out of the story was the formation of the Joker Underground movement. In the game, it felt like these people were criminals in a way, but Batman was being forced to join his Insurgency with them. Having them be normal people uniting in the name of Joker and saying that he is a symbol of freedom makes the people of Gotham look pretty stupid. I am sure this universe’s Joker was just as bad as the other so it just felt confusing why they would make him a martyr.

Like I said earlier, the last few panels were the major payoff for these two chapters. Buccellato and penciller Bruno Redondo deliver the mad tyrant I have been waiting for these past few years of Injustice. You can see how the name of the Joker sends him into a frenzy and the results are not pretty. It is hopefully a turning point for their characterization of Superman and now we will see the dictator that the video game portrayed so well.

With Rebirth coming and the end of this series on its way, the creative team of Miller and Buccellato seem to be really pushing now to move the story along to meet the video game’s timeline. I am certainly looking forward to them speeding things up. It is time to see Superman become a full fledged tyrant and Batman begin to investigate the inclusion of heroes from the Multiverse. The next few chapters will be very telling as to whether this is the route the story is heading towards.