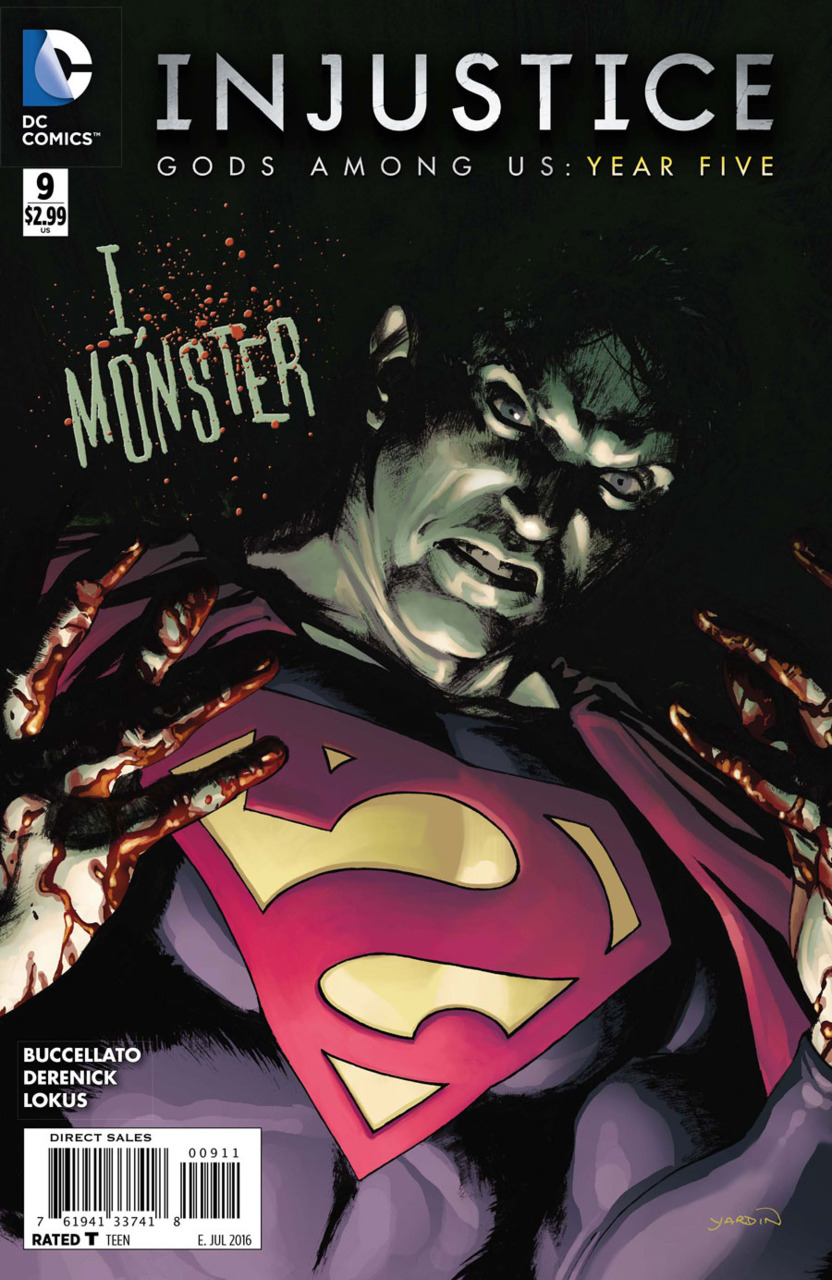 Synopsis: Opening in Syria, Bizarro brings Trickster to a castle to get away from everyone. Having just killed a few members of the Rogues and attracting the attention of the Regime, it is really important that the pair stay hidden. Trickster sees that Bizarro is troubled and asks him to open up. Bizarro is confused by the fact that no one believes that he is Superman. Trickster does concede that with all the people believing he is not Superman that maybe they are correct. Angry about this conclusion, Bizarro almost attacks Trickster before Trickster elaborates that maybe he can be a better Superman than the dictator that Superman has now become. Trickster offers to help Bizarro as his friend.

After establishing themselves as “friends forever”, Bizarro lets out a very powerful sneeze to which Trickster has to teach him to always use both hands to cover his mouth. Trickster then announces how hungry he is and how he would like a hamburger. Bizarro is confused and almost fries a cow with his laser vision before Trickster tells him to take him to a fast food restaurant to try hamburgers. While enjoying their burgers at a restaurant in Israel, Bizarro begins to talk about his origin and his first memories of men in lab coats surrounding the tube he was born in. While discarding some trash, Birzarro angers some military-type men who try to fight. Trickster volunteers to fight them and everything is going well until one of the men pulls a gun to which Bizarro disintegrates him with his heat vision. Trickster is shocked and tells Bizarro that he can not do that with so many witnesses around. Bizarro answers this problem by flash-frying everyone in the restaurant besides Trickster.

Chapter Eighteen opens with Trickster visibly horrified by what Bizarro has just done. They fly away and Bizarro begins asking Trickster if he is mad at him. Trickster reassures him that he is not mad at him and that they are still friends. Trickster explains that they need to stick together because they do not have anyone in their lives who really cares about them. After flying for a little while, Bizarro begins to sneeze again so he uses both hands to cover his mouth. He accomplishes this successfully but dropped Trickster in the process. Trickster’s body landed on a mountaintop and it is clear that he is dead.

Back at the restaurant, Yellow Lantern and Cyborg try to examine the crime scene and notice the evidence that someone with heat vision killed all the civilians. Cyborg, meanwhile, questions Superman directly about the reasons behind killing an entire group of people at the Joker Underground rally. Superman felt he had no choice. At this time, Bizarro brings the corpse of Trickster to the old man in Germany and demands for him to fix his friend. The old tailor tries to explain death and contact the Regime but Bizarro leaves in anger.

The issue ends with Superman interrogating the old man while Bizarro breaks back into Lex Corp telling Luthor to fix Trickster.

Thoughts: This next issue of Year Five is a slight departure from the last few issues dealing with the Insurgency and the Regime. Instead, the issue focuses on the budding relationship between the Trickster and Bizarro. Though it ends in tragedy, I did enjoy the little moments like Trickster teaching Bizarro simple things like covering his mouth while also opening up a little about not having anyone in the world. We also see how Trickster’s constant naivete ultimately led to his death. It was a very much a tragedy in that Trickster was looking for someone to care about him but he could not hope to control a powerful being like Bizarro.

With a new artist on the title, Tom Derenick, I was actually pretty pleased with his pencil work here. He really captured some great facial expressions between Trickster and Bizarro. He had to convey a wide range of emotions, especially in Trickster, given how this issue played out.

Overall, this issue did eventually tie back into the overall story and it looks like the Superman/Bizarro showdown is fast approaching. With Luther now involved, I am hoping that we might get to see Bizarro teamed up with Batman’s Insurgency to try and take the offensive against Superman.