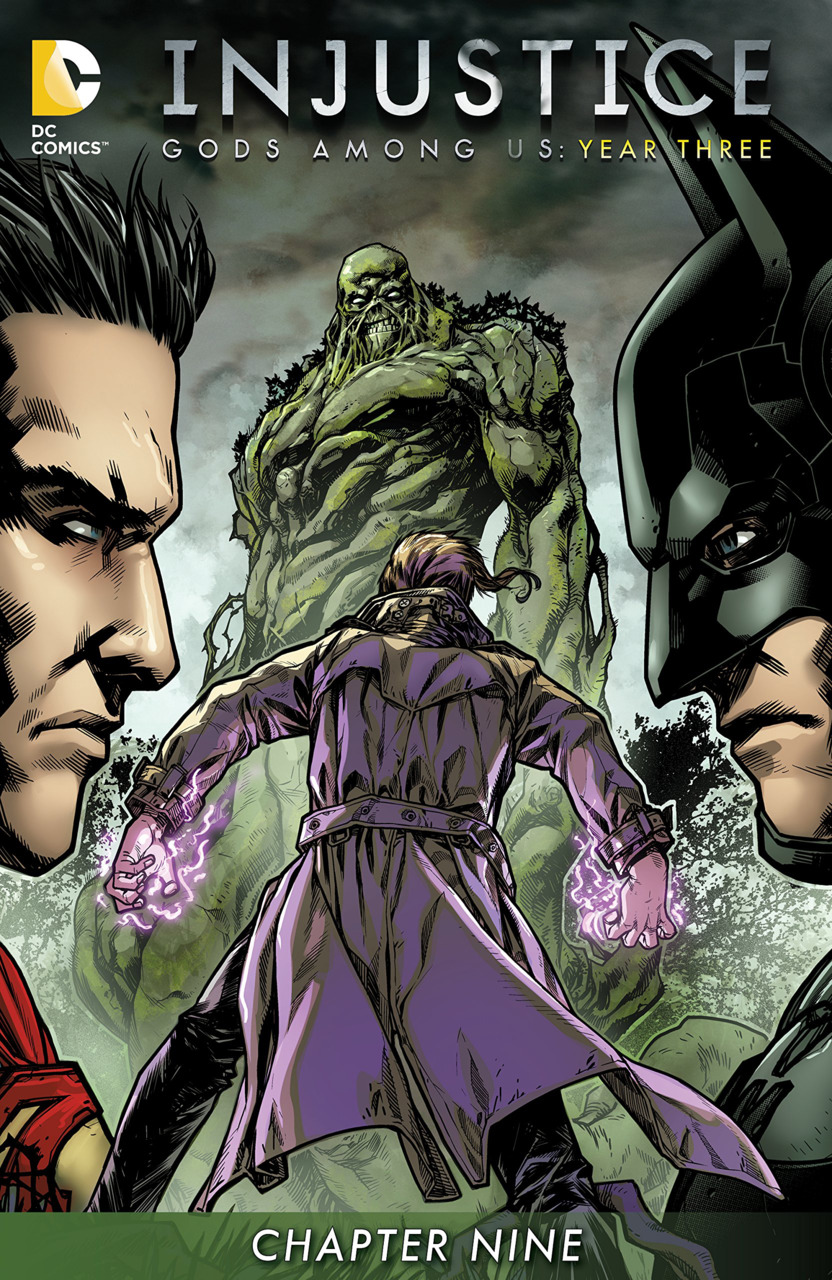 When a book has a cast as large as Injustice it can easily fall into a trap of continually pitting them against each other while ignoring dialogue. Although this can work at times, when over utilized the confrontations can begin to lose their impact. The story loses depth and becomes a superhero/supervillan free-for-all. Seemingly aware of this potential hazard, in this week’s issue Tom Taylor effectively utilizes dialogue to explore the mental dichotomy between the characters on each side of the current war. It reminds the reader that the players on each side of this current battle firmly believe that their ideology will restore balance to the DCU. I enjoyed this break from the action and feel that it further solidifies Tom Taylor as a well-rounded storyteller.

The story continues in Gotham with Superman now free from his supernatural restraints. The Spectre has killed Ragman and the body of Raven is still missing. Superman quickly begins his interrogation of Constantine, seeking the location of Raven. The exchange between Superman and Constantine is quickly overshadowed by the conversation between Superman and Shazam.

In this instance, Shazam serves as the physical manifestation of Superman’s conscious. This give-and-take scenario is beautifully rendered on the page with Shazam resting just behind Superman’s right shoulder. Acting as a modern day Jiminy Cricket, Shazam is able to prevent Superman from ending the life of John Constantine. Clearly, Shazam has saved the Man of Steel in more ways than one. If Constantine had been killed, he would have potentially become a martyr to the cause, advancing the necessity of Superman’s demise.

With Constantine in tow, Superman and his cohorts ascend towards the Hall of Justice. Although their intentions are never made explicitly clear, it can easily be assumed that they plan to use any means necessary to extract pertinent mission advancing information from the mind of Constantine. However, the crew’s plans are quickly disrupted by the metaphysical Deadman.

Boston Brand, better known as Deadman, has the ability to posses the physical bodies of the living. This ability was given to him in order to right injustices and subsequently avoid being cast into hell. Deadman quickly uses his power to free Constantine while also seeking to gain an audience with Spectre. I thoroughly enjoyed the verbal battle between Deadman and Billy. Again, Tom Taylor uses this instance to demonstrate the powerful ability that dialogue can have on the overall impact of a story. Although Billy appears physically overpowered in his childlike form, he is able to reject Deadman based solely on his will to rid the ghost from his body.

With Deadman and Spectre now standing face-to-face we are given insight into Spectre’s behaviors and motivation. Specifically, we learn that Jim Corrigan is not currently the vessel of Spectre. The true intentions of Spectre have yet to be revealed, and this current turn of events gives Tom Taylor the freedom to take the story in a plethora of different directions. Although I doubt this will be discoursed in the near future, I am confident this twist will add another layer of depth and secrecy to an already intriguing storyline.