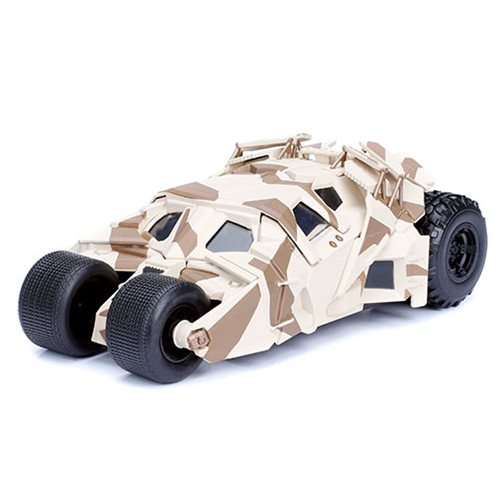 Jada Toys is bringing you all sorts of Batman love in the form of new offerings featuring Batmobiles from Batman’s eighty-plus year history, Bat-Fans.  There’s a ton to cover so get your atomic batteries to power and turbines to speed. First up is an incredible 1:18 scale replica of the Batmobile as seen in the 1966 Batman television series.  This stunning die-cast car features rubber tires and real working lights, as well as two three-inch figures of the Dynamic Duo. Priced at $59.99, the Batmobile is available to order now from Entertainment Earth. Maybe you are a fan of the 1966 Batmobile, but are looking for more of a challenge? Then check out this impressive Batmobile model kit based off the one seen in the 1966 Batman television series. Die-cast body, rubber tires, and 2.75-inch tall Dynamic Duo figures all compliment this 1:24 scale model kit perfectly.  Priced at $24.99 and available to order at Entertainment Earth. But what if you prefer another version of the Batmobile? Well, there’s also a replica based on the iconic car’s appearance in Batman: The Animated Series.  This is a 1:32 scale die-cast car that is no less impressive than its 1966 Batmobile cousin. With a metal body and rubber tires, it is priced at $8.99. You can order this one now over at Entertainment Earth. Is the video game Batmobile more your thing? A 1:32 scale Arkham Knight Batmobile is also available.  A die-cast body, rubber tires, and one of the most unique looks of a Batmobile around help this incredible replica stand out.  Priced at $8.99 and available now from Entertainment Earth. Movie fans can take part in the fun too, as there are multiple versions available from the films.  Hailing from its appearance in the Justice League film, this 1:32 scale Batmobile is priced at $8.99, features die-cast body and rubber tires, and is available now at Entertainment Earth. The Batmobile movie magic continues with replicas based in the Batman Forever Batmobile. A 1:32 scale replica with die-cast body and rubber tires, it is priced at $8.99 and available to order now at Entertainment Earth. The Dark Knight Rises Tumbler Batmobile is a 1:24 scale vehicle with die-cast body and rubber tires.  The opening cockpit allows you to put the included Batman figure right inside. What really sets this one apart is that it comes as the camouflage version, not black.  Priced at $24.99, this Batmobile is available now at Entertainment Earth. The last item is the 1989 Batman Batmobile 1:24 scale model with die-cast body and rubber tires. Over 25 parts are included in this model kit, but it comes complete with everything needed to assemble. Also included is a Batman figure based on Michael Keaton’s appearance in the film. This one is priced at $24.99 and can be ordered now at Entertainment Earth.

While some of these items have been available in select stores before now, this is the first time they are available through select online retailers. Will you be adding any of these to your collection?