Review: Red Hood and the Outlaws #13 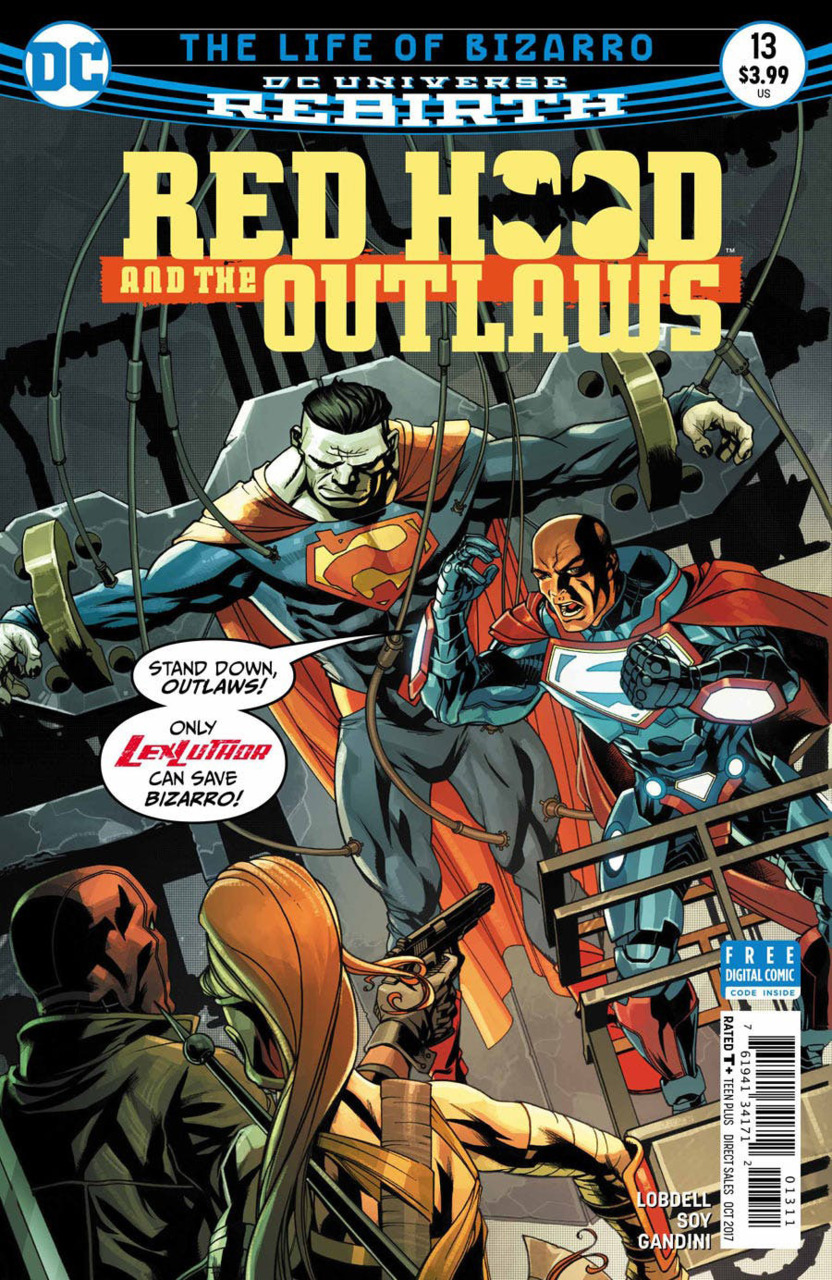 Overview: After dying from his fight with Solomon Grundy, Bizarro is brought back to life by none other than his initial creator, Lex Luthor. However, Red Hood and Artemis are shocked by the new, revived Bizarro.

Synopsis (spoilers ahead): During a brief flashback, we are shown the beginning of Bizarro…or at least how he initially thought it began. After some quintessential Kal-El of Krypton moments, Bizarro snaps himself back to reality and remembers his true beginnings in a test tube within Lex Corp. He recalls hearing “God” (Luthor) refer to him as a failure and order all clones of Superman to be destroyed.

Back at LexCorp Tower, Jason and Artemis grapple with their decision to allow Luthor the chance to bring Bizarro back to life. Artemis points out that it makes sense to involve one of the world’s smartest minds, especially one who has been obsessed with the study of all things Kryptonian. Lex comes out to the balcony and informs them that he should be able to save Bizarro despite Bizarro’s unstable body due to the cloning process. Luthor adds that Bizarro is technically LexCorp property and will be returned to him afterwards.

After Luthor heads back into the lab, Jason begins to blame himself for pushing Bizarro too much. Artemis counters that Bizarro always wanted to help and no one was going to stop him.

Back in the mind of Bizarro, Bizarro remembers his time in the amniotic fluid as he was grown. He wonders whether all this time in the tube made him bizarre or if he was always meant to be that way. Despite feeling fear when he eventually broke free, he will never forget seeing Red Hood and how comforting he was as his first contact in the world.

Atop LexCorp Tower, Jason and Artemis both share their memories of Bizarro and how he has made them feel more like themselves rather than imitations of their former mentors or Justice League counterparts.

Inside the lab, Lex’s team of scientists confirm Luthor’s hypothesis regarding the positive reaction Kyptonite has on Bizarro’s physiology. Lex orders them to leave him alone with Bizarro. Lex asks the unconscious Bizarro if he remembers him and we are shown a callback to the Forever Evil storyline which showcased the first Bizarro clone. This clone, however, was killed by Earth 3’s Lex Luthor before the deteriorative effects from the cloning process could take hold. Lex realizes that, to honor his old friend, he must give this Bizarro the chance the originals clone never got. He then plunges a syringe full of Kryptonite into the heart of Bizarro.

Lex emerges later from the lab and tells Red Hood and Artemis that he has granted them full custody of Bizarro and they can go in to see him. He makes a comment that he will be fine but there will be an “adjustment period”. After thanking Luthor, Jason and Artemis enter the lab to discover changes Bizarro has undergone after returning from the grave. Speaking eloquently and assembling a piece of equipment, Bizarro addresses his “compatriots” and tells them that he is looking forward to returning to their “collective domicile”.

Analysis: I feel like I am beginning to sound like a broken record with stating how great this month’s issue of Red Hood and the Outlaws was, but its absolutely true. We really did not have to deal with the “Death of Bizarro” for very long, but merely a relative brush with death. Although, as anyone can attest when anxiously waiting in an ER for good news on an injured loved one, its a time when we either outwardly or internally reflect on the good times with that loved one. This issue reflected that perfectly with Jason and Artemis reliving good times with Bizarro and Lobdell perfectly portrays how each of their relationships is unique, but both show how Bizarro has helped both of them find something that was missing in their lives before he came into it.

Regarding the artwork, Soy really captures the moments of brooding and self doubt our characters go through. The dark shadows on their brows and eyes helps to portray the concern they feel such as when Jason waits anxiously to see Bizarro. Soy and colorist Veronica Gandini brought something different to this issue with the backstory to Bizarro (or at least his imagined one). They help to portray the innocence of this character with bright, vibrant colors and very cartoonish depictions of Bizarro as he leads the Justice League. This only adds to the attachment, at least for me as the reader, towards Bizarro who has become such a great character during Rebirth.

The writing and artwork were vey solid as always, but I did want to take a moment to discuss the cliffhanger. I will admit I’m very interested in seeing a different kind of Bizarro (one that forms sentences correctly for one thing) but I am not sure how I feel about this as a long term change. The childlike nature and naivete inside a hulking Superman clone has been really built up wonderfully by Lobdell during the last few arcs and I want to see that continue. As a short term departure, I’m sure there will be a lot of fun dialogue as Bizarro begins to take charge of the Outlaws with his newly acquired intellect. I especially can’t wait for the witty banter between Jason and Bizarro.

Final Thoughts: I could discuss this book all day, but I am curious how this book is being received by those keeping up with it. Let me know your thoughts below. Being one of my three favorite Rebirth titles (Detective Comics & Superman being other two), I’m curious to know where it ranks for you.