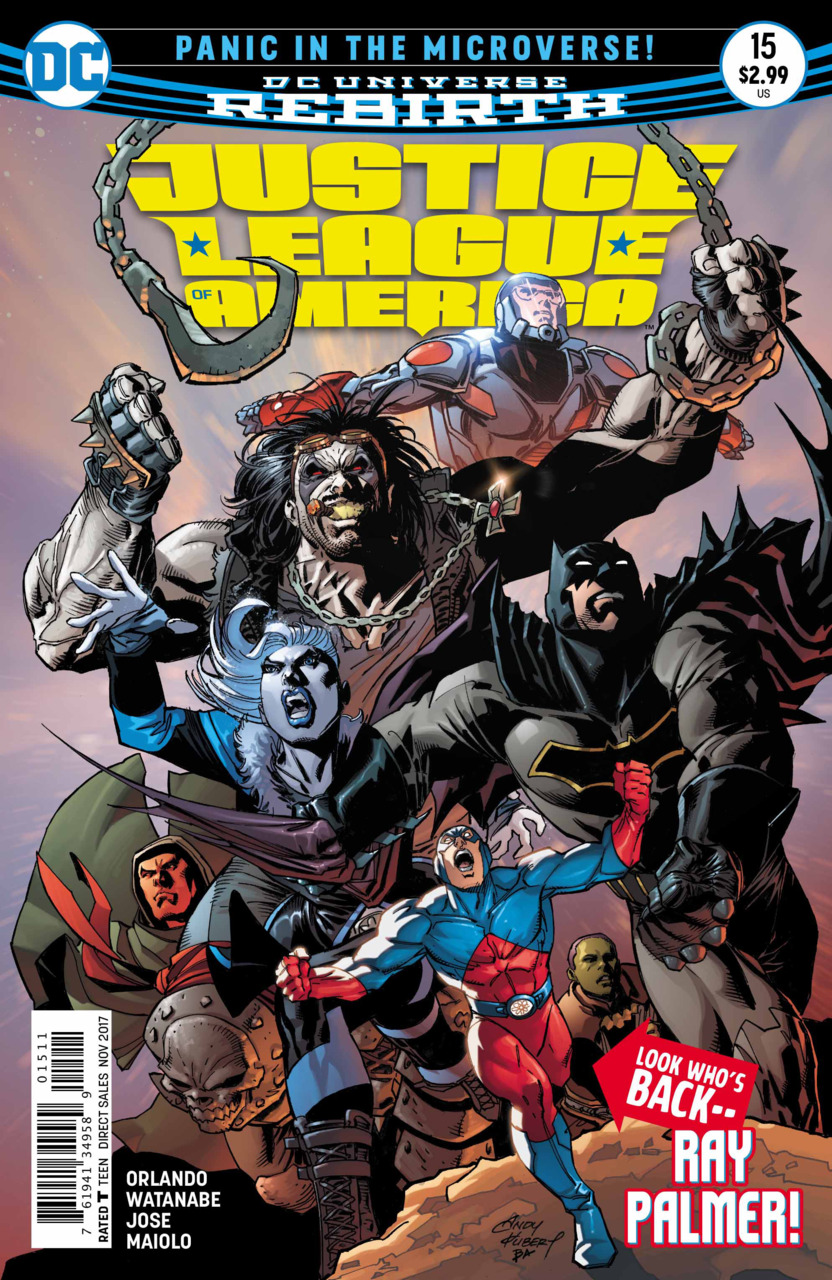 Overview:  Some time ago Ray Palmer disappeared into the Microverse and hasn’t been heard from since.  His absence sparked to life Ryan Choi’s time as the costumed adventurer the Atom, but where has Palmer been all this time?  We’re finally starting to get some answers as we delve into Palmer’s missing time with the story of how he met Preon and Dr. Aut.

Synopsis (Spoilers Ahead):  Despite the previous issue’s warning that Dr. Aut may not be the benevolent scientist we thought him to be, this issue skips the resolution and digs right into Ray Palmer’s history with the Microverse.  It all began in his lab when he discovered not only the existence of the Microverse, but it’s fragile state as well.  In need of more information, he blasts a recorded message of himself hoping for feedback, which he eventually receives from Dr. Aut himself, who reaches out.  After sharing information, Palmer realizes he needs to be closer to the problem, so he makes the journey to the Microverse and meets face to face with Dr. Aut, who shows him his quantum storm harried planet of Malen-Ka and shares with him his theory of the Ignition Point which is causing the instability.  From there the duo begins their treck, first stopping at the wretched hive of scum and villainy that is Katarth-Un to recruit a teleporter from the Docent folk, our friend Preon from previous issues.  Despite her pessimistic outlook on the Microverse’s situation, she joins the group.

Together, the trio heads directly to Moz-Ga in hopes that Palmer would somehow be able to do the impossible and manage to get the entity to speak.  Unfortunately for the team, this is not the case so they have to go about their quest the old fashioned way – travelling the metaphorical countryside, getting into scrapes and having adventures.  Eventually Preon and Palmer’s admiration of one another grows into something more and they find solace with each other.  Their adventures bring them to the planet of Kihldall where Plamer crafts Preon her own bio-belt to match Dr. Aut’s and his own.  She makes use of it sooner than anticipated, however, as they track a massive quantum storm hoping to identify its origin point.  On the planet things go sideways and Preon is forced to use her bio-belt to teleport away from the eroding planet as she was being bogged down by the fleeing locals, back to the location she originally met Palmer.  Now a duo again, Palmer comes up with a dangerous idea wherein they shrink down even smaller than they are and ride particles of light to not only safety, but the theoretical ignition point.  Small enough to see the very cracks in the fiber of reality, the pair reach their destination only to discover that the destruction of the Microverse isn’t natural.  Everything is the result of someone or somethings direct action.

Analysis:  I’m a sucker for a good sci-fi story, and that is exactly what Steve Orlando has delivered here.  Over the course of these meager twenty pages, he has laid out a surprisingly complex existence for the Microverse.  This is exactly why I have a hard time criticizing Orlando’s writing at times.  He’s a genuinely good writer with some great ideas, he just has poor execution on occasion.  This issue is not an example of those times, though, as he guides us through Palmer’s adventures with grace and ease showing us both sides of the character, the hero and the scientist.  The story and history is well thought out, to the point I wonder if assistance was brought in as I did notice a credit for DC mainstay Geoff Johns at the end of the book.  This story being a pick-up from Johns’ own work in DC Universe Rebirth from last years makes me wonder if there was some collaboration.  Either way, the end result is on point and I didn’t expect to enjoy this story as much as I did due to the underwhelming lead in from the previous issues.

There is a lot packed into these pages as we dive through Palmer’s recent history.  We skip back and forth in classic sci-fi nature seeing different worlds, meeting different species, and following the team on what amounts to basic quests.  They help some locals, they befriend others.  I really would like to have spent more time with Palmer’s adventures as they speak to my interests.  I love sci-fi and adventures stories.  It’s something that has always drawn me to comics.  There was a tangible sense of fun to these pages that was sorely missing from previous installments of this story.  I loved the entire segment where they shrink down and ride particles of light to safety.  It’s so ridiculous that it works.  And seeing the breaks in reality?  Gold.  Compounding everything with the not entirely un-expected revelation that everything is due to some cataclysmic event really captivated me.  I’d like to have seen how exactly Palmer came to distrust Dr. Aut, but I suppose that’ll be next issue.

Felipe Watanabe’s return to the book as penciler is welcome as he has been responsible for some of the better art in the series to date.  The frantic pace of this chapter worked well with his clean style.  When we are seeing large-scale settings with a lot of action, a clean approach does wonders for guiding the reader through the visual story.  Too many times I’ve seen artists get bogged down with too much detail or thick lines cluttering the page.  Watanabe balances everything nicely, giving us robust panels without overpowering us.  At times his facial expressions may seem to be a little off, and one of my largest complaints in sci-fi stories are the sheer number of humanoid creatures, but those are minor issues that don’t get in the way of my overall enjoyment of Watanabe’s work here.

Final Thoughts:  Steve Orlando changed the pace of this storyline with this chapter, which paid off in the long run.  I think this interlude will be a nice breather before the story comes to a close.  I am somewhat irritated that we got no closure to last issue’s cliffhanger ending, only more questions, but Orlando earned some goodwill from me here so I’ll let it play out.  I remain torn on whether I’d like this story to tie into the overall Rebirth mythos or exists as a standalone story.  Both have their merits, but I’d hate to have a problematic story such as this tie too deeply into Rebirth.  Time will tell, I suppose.