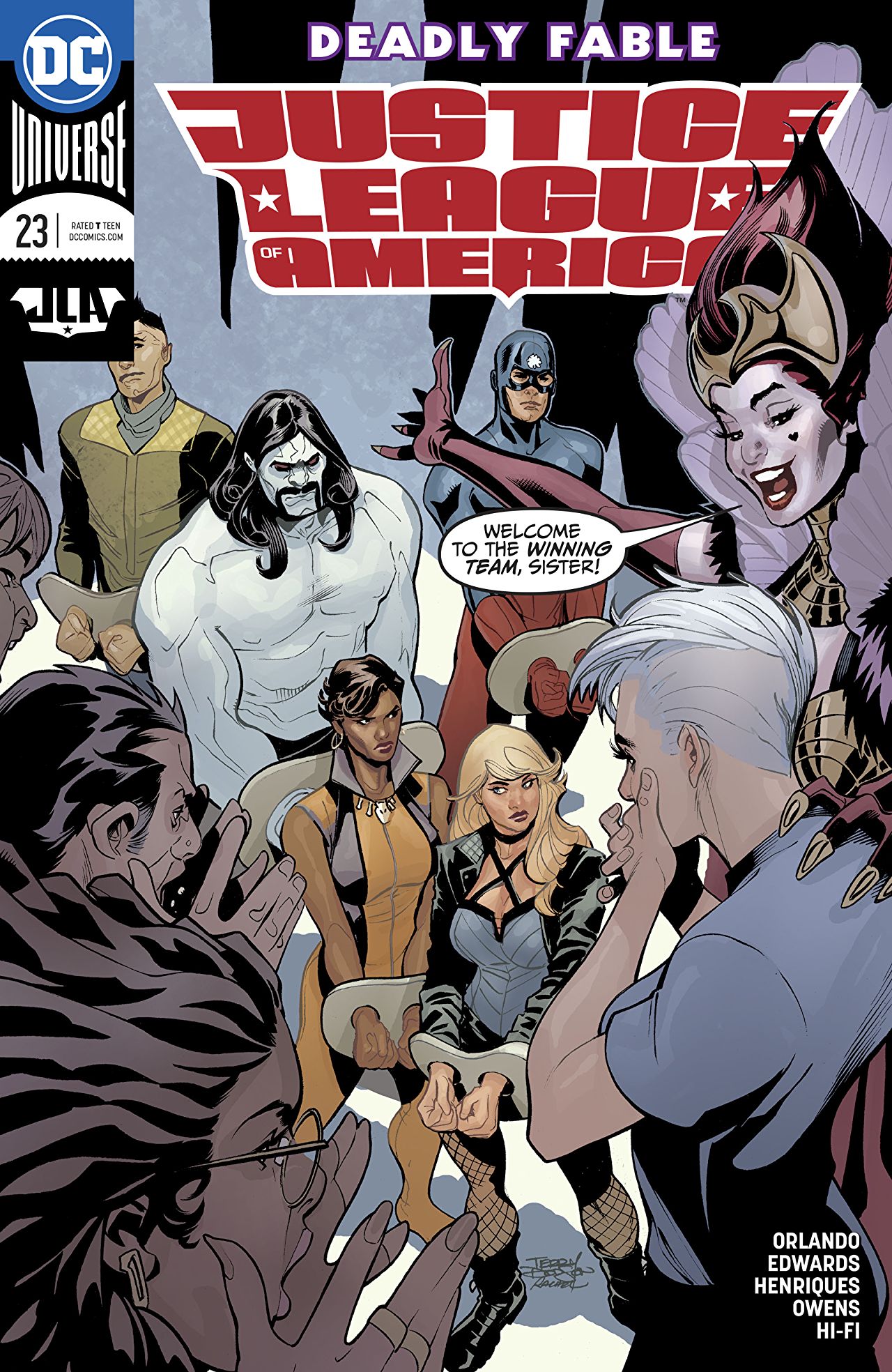 Overview: Tsaritsa (like every other maniacal villain) gloats and shares her ultimate evil plan. Vixen returns like a boss. And, we have another Alan Moore character make an appearance.

Synopsis (spoilers ahead): We are given a narration of Tsaritsa’s history by Caitlyn: at the dawn of time, Tsaritsa was the first monarch of mankind. Balanced by the just nature of her sister, Freya, Tsaritsa ruled her kingdom unjustly through tyranny. Her subjects rebelled and cast a spell upon her; she was sent to the land of imagination, Immateria. Although Tsaritsa was cruel and evil, Freya, in agony over her sister’s imprisonment, killed all of the members of court. In her grief, she starved herself in her self-imposed exile.

In present day: Tsaritsa views Caitlyn as her sister, thus she offers Caitlyn the cure so that Tsaritsa could have a way to have a “do-over” with her sister. Caitlyn confronts Tsaritsa about how her current reign is just like her reign from before, how she is still oppresses others, and how she killed Vixen and enslaved citizens of Happy Harbor. Caitlyn tells her that although she accepted the cure for her destructive powers in exchange for helping Tsaritsa, she does not support her current tyranny.

Tsaritsa explains that caring for others causes pain. She says that it is expected of those who live in the mortal world to care about justice for the innocent. Tsaritsa states that she plans to rule from her throne in Immateria with Caitlyn; for to truly rule the world, they must first rule humanity’s thoughts. She reveals that she has built a machine to access Immateria.

In the midst of the crater of the exploded JLA base, a body starts reassembling itself. Similar to Dr. Manhattan in “The Watchmen,” Vixen reassembles her splattered body. (I know, awesome!) She reassures the citizens of Happy Harbor that she, along with the JLA, will stop Tsaritsa and free them from her rule.

As Caitlyn walks by the imprisoned JLA, Lobo and Black Canary call her out on her betrayal of the team.

Meanwhile in the City of Vanity, the Ray is confused about his future and whether he should have left the JLA or not. After contemplation, he decides that his time in the JLA is not finished and he should return to his team. Just in time, the Ray enters the scene and frees the JLA. The JLA fight the Woodsmen, who guard Tsaritsa, so that they can stop Tsaritsa from opening the portal. They arrive too late as she has opened the portal to have, Promethea, an armored female warrior (akin to Wonder Woman in appearance), step out to confront Tsaritsa.

Analysis: I think the art team once again did another fantastic job with this issue’s art. They did a great job with the many action sequences and Vixen’s awesome return.

I think that Steve Orlando wrote a good issue. I liked his writing of the tormented inner dialogue of Caitlyn Snow. The story of this issue itself is pretty simple: the villain reveals her grand plan to the traitor of the team and seeks to reign the world with her secret weapon. It just set up for the next issue, which I am excited for. My biggest issue with the B plot of the Ray, like in the first issue of the arc, felt totally out of place and disrupted the main story. It made a decent A plot with Caitlyn and the rest of the JLA disjointed.

Now, who is Promethea? Well, she is another creation of Alan Moore. (He also wrote “The Watchmen,” “V for Vendetta,” and “The Killing Joke.” ) In her comic series (from 1999-2005), her goal was to bring the Apocalypse. Her series dealt with mysticism, spirituality, and the afterlife. I have no clue where Steve Orlando is taking this arc and this character. Maybe her arrival in the main DC Universe is because of Dr. Manhattan, or is due for some other unknown reason? I am highly curious how her character will be used.

Final Thoughts: It was the standard story where the villain with a god complex shares her plans (and inadvertently the way to defeat her) with traitor who helped her. But, what makes this issue appealing (and this arc) is the inclusion of another Alan Moore character in the DC Universe.