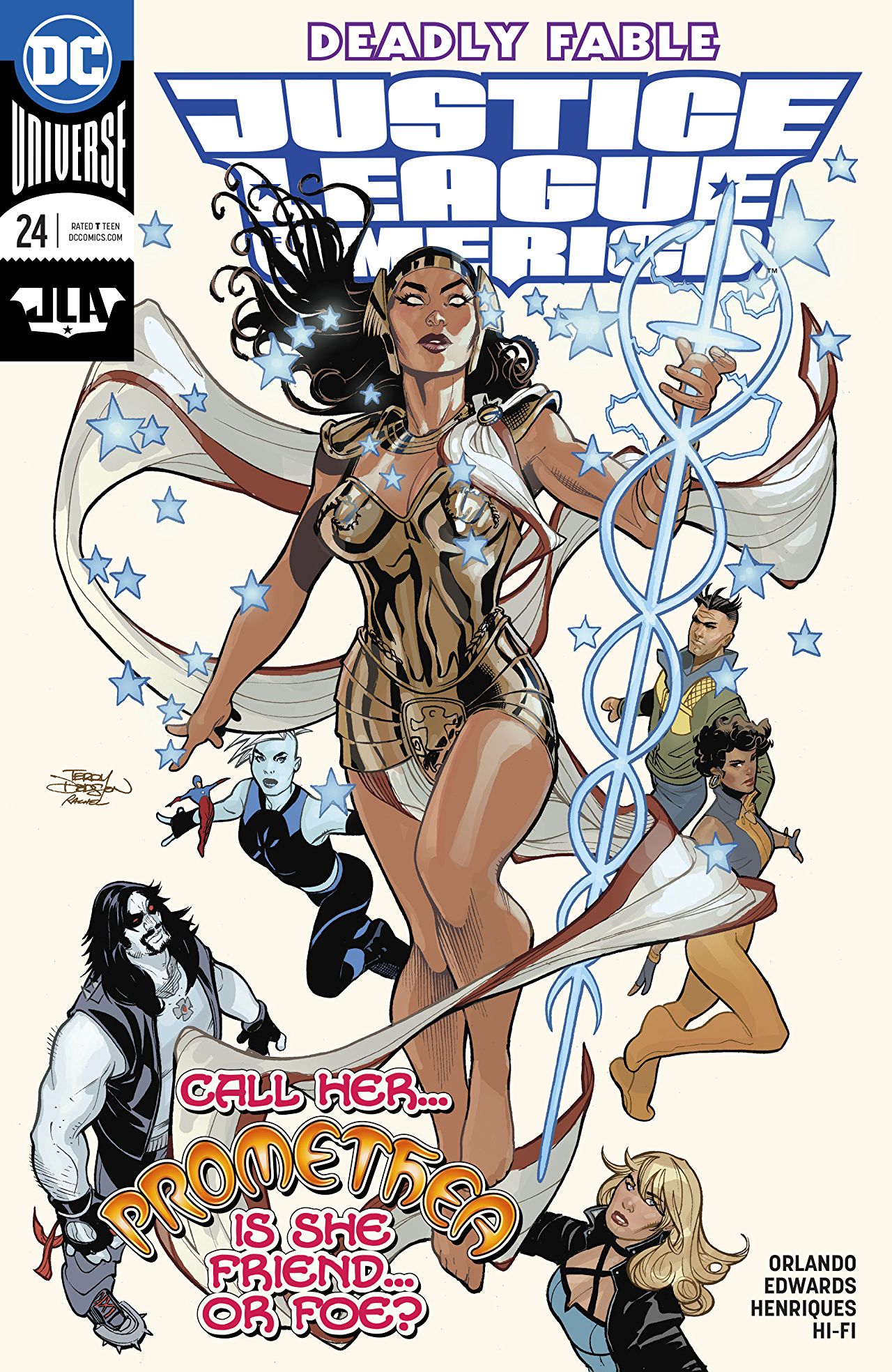 Overview: We have the introduction of Promethea into the DC universe and the redemption of Caitlyn Snow.

Synopsis (spoilers ahead): This issue starts with Vixen accessing the Happy Habour citizen’s minds through her totem and encouraging them to break away from Tsaritsa’s control. (I guess this is a new power of Mari’s because I have not seen this happen before.)

The camera pans to the big fight in front of Tsaritsa’s machine that will access the imaginations of everyone on Earth: Lobo vs Caitlyn, the rest of the JLA vs the mind-controlled Woodsmen, and Tsaritsa vs Promethea. Lobo is pissed that Caitlyn betrayed the team, and Atom sticks up for her. Enough said.

The more interesting fight is between Tsaritsa vs Promethea. Promethea, as the gatekeeper to the realm of Immateria, refuses to let Tsaritsa pass. After decking her, Promethea abruptly leaves the fight because she has “a better idea.”

Now unencumbered, Tsaritsa goes to activate her machine. Vixen along with some of the citizens fly into the machine, destroying Tsaritsa’s plan to rule the imaginations of humanity. In retaliation, Tsaritsa unleashes her fury on the JLA, pummelling them into surrender. Caitlyn, tired of watching Tsaritsa bring terror instead of peace as she promised, becomes Killer Frost again and epically kills Tsaritsa.

Promethea reappears and Dinah calls her out on abandoning the fight. Promethea shares that she did not leave them; she was present in their imaginations giving the team strength to keep fighting. Caitlyn, now Frost, laments her decision to allow evil to exist in exchange for a cure. Batman appears offering her a chance to redeem herself.

Analysis: This arc follows the tragic story of Caitlyn Snow. She knows that she has the ability and capacity to be a monster and desperately wants to change her destiny as a being of death and pain. She sacrifices her morals and the lives of her friends and citizens of Happy Harbour (Also the minds of the world, can’t forget that too!) for a cure. In the end, she chose to redeem herself for her mistake.

It is easy at first to read this arc and condemn Caitlyn, but really, this is such a human reaction to an awful situation. She retakes the burden of carrying this evil inside her knowing that the alternative is the destruction of the world by Tsaritsa’s hand. With Atom’s optimism and Batman’s second chance, hopefully, Caitlyn will find the peace she deserves.

The JLA has been fractured during the last two arcs – the Ray elsewhere dealing with his problems, Mari’s disintegration and subsequent resurrection, Caitlyn’s betrayal, and Batman’s absence. This Justice League is at their breaking point.

Promethea, an Alan Moore creation…what to say? From an amazing entrance into the DC Universe during the last issue to a quick exit in this one, I did not understand why bringing her into this story was important at all. Unless they are introducing her character to later reappear either in this or some other book, they could have just used or created a lesser known character and this story would have still been the same. I really liked how she was portrayed and drawn (Her weapon was so cool!), but I was seriously disappointed by her usage in this story.

The art was once again beautiful. The best part of this issue was the art of Promethea herself and the fights between her and Tsaritsa.

Steve Orlando’s writing was solid once again. Tsaritsa’s voice did become annoying as this arc has gone on, so I am quite glad she was killed. Lobo seemed a little off; he was surprisingly more loyal than I thought he would be. Even despite these “criticisms” of those character’s voices (just nitpicks), I really think Orlando did a splendid job with Caitlyn’s inner turmoil and her overall story in this arc. In a world full of superheroes and a guardian of imagination, it is nice to see someone struggle with common human issues.

Last thing, the DC Metal event is still ongoing and Tsaritsa repeatedly referenced how hope in the world was falling due to the Evil Batmen causing mayhem on Earth. This is why Batman has been absent from this arc (spoilers) because he has been stuck in the depths of the Dark Multiverse. With the reappearance of Batman at the end of this issue, the JLA book has provided us a timeline of when Metal takes place.

Final Thoughts: I felt that Caitlyn’s story in this arc has been fantastic. Promethea, an Alan Moore creation, was underwhelming used in this issue. And, Batman is back.