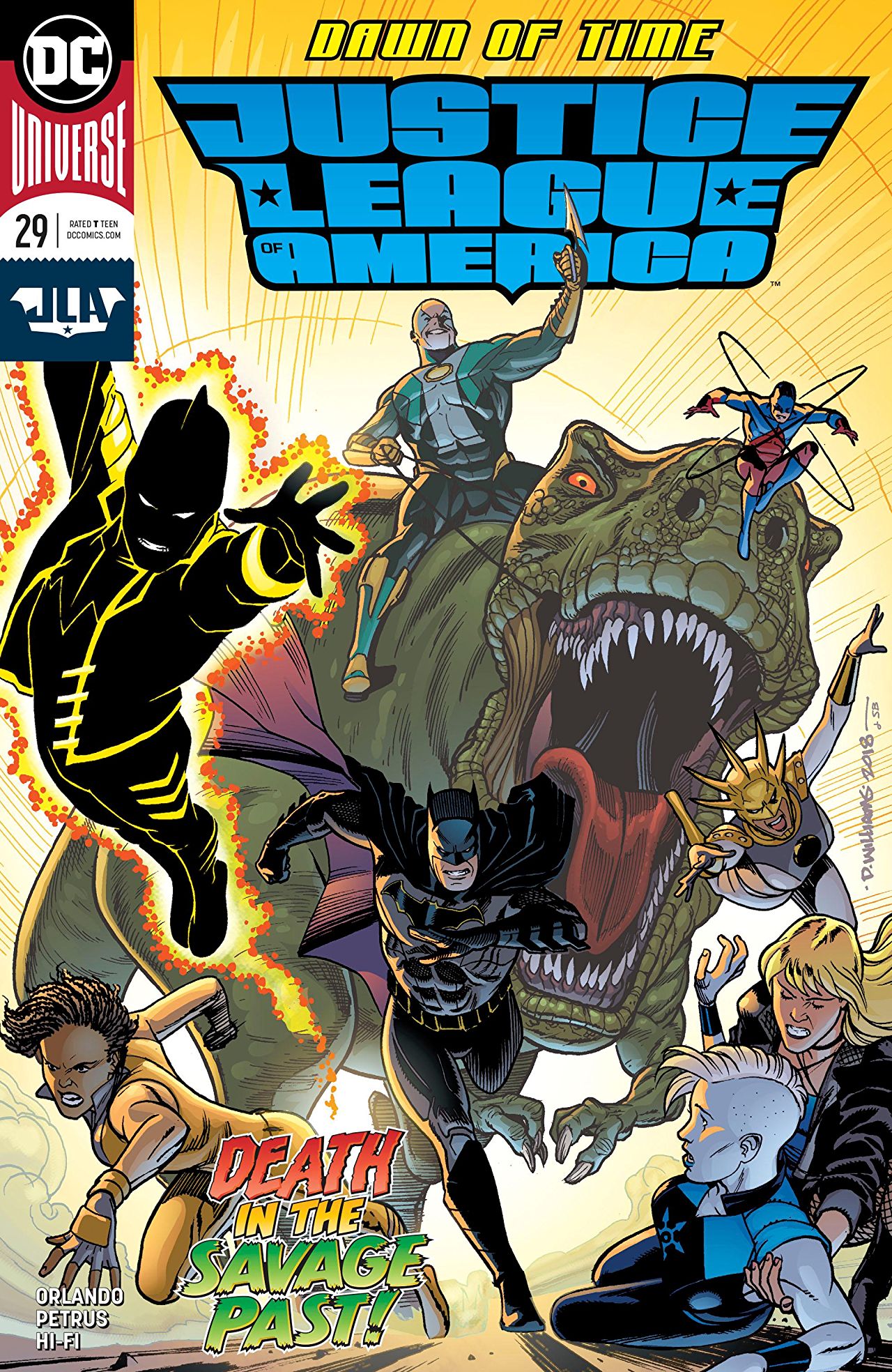 Synopsis (spoilers ahead): Aztek narrates with Ahl dead and the Justice League overrun by time-displaced armies, she is the last member standing and has to act to save them. Chronos, after just killing Ahl, is dumbfounded why the Justice League still exists. If Ahl’s imprint is the source of the idea of superheroes, then with him dead the Justice League would cease to exist; time should immediately have changed with Ahl’s death. Aztek tells him that they are still standing because of her 4-D war suit’s energy; her war-suit protects the League from Chronos’ hourglass.

Caitlyn rushes to protect the injured Ryan. With his severe injuries, the only way to stop the bleeding is to cauterize his wound. To make him distracted from the intense pain (or because of love), she kisses him and freezes the wound.

Mari’s and Bruce’s plan is to steal Chronos’ hourglass to save Ahl and send Chronos’ army to their respective time periods. As they advance, Chronos sends more droves against the League. Ryan, now not a bloodied mess, confronts him. Once again, Chronos taunts that Ray Palmer could not beat him, so what chance does little Ryan have? Ryan shrinks and “attacks” Chronos; Chronos admits that he was not hurt by his “attack.” Ryan smirks and states that he stole his hourglass.

With it now in hand, Ryan sends all of Chronos’ army back where they belong. Chronos tells Ryan that he does not know how to operate the hourglass safely; with a smile on his face, Ryan sends Chronos somewhere into time.

Ray tells the team that although they have defeated Chronos, Ahl is still dead. They cannot go back to their lives if he is dead. Caitlyn tells the team that they have the hourglass; they have all they need to go to their time. Aztek tells her that the hourglass runs on the same power as her war suit; given enough time, she could unlock the interface. Bruce tells her that they have all the time in the world (because they are at the time period where man does not exist yet.)

After many weeks, the League gathers around Ahl. Aztek has figured out a way to locally reverse time; essentially, she can reverse Ahl’s time. She “brings” Ahl back to life.

Ray asks Ahl if he is okay. He tells Ray that he was just thinking about the brick. He shares that he left final heaven to bring the imprint of the superhero to earth, only for earth’s superheroes to save him. Ray offers to change the brick into dust, but Ahl refuses. He states, “if the people inspired by my idea have to face mortality, then so do I.” He tells Ray to hand the brick to Aztek for her to return it to the time stream.

Back at Happy Harbor, the League returns and Caitlyn asks Ryan why Chronos is not with them. They traveled only through time and not space, thus he should be in front of them. Ryan tells them that he returned Chronos to a particular place: the bar where Lobo visits.

While the League exits a tunnel, Bruce asks Mari and Caitlyn if they are sure with what they are about to do. Caitlyn shares that they are ready; with everything the League has confronted, heroes are more than champions of justice. On live television, Mari and Caitlyn unveil their plan to change Mount Justice from a superhero headquarters to a superhuman think tank. They will use their experience from “the battlefield to create new concepts, impossible medicines, and groundbreaking technology” to help humanity reach their future. She tells the world that the Justice League of America was phase one, phase two is the Justice Foundation.

Analysis: I did not expect this book to end this way. This definitely is one of Orlando’s stronger issues.

Okay, I still do not understand the whole “God of Superheros” thing. So forgetting most of that plot, I liked how each member got something from their experience with Ahl. They had a renewed appreciation for what they do. They are superheroes, but they can be more. Ahl left his imprint to create champions of justice, but there is more than one way of justice.

A big criticism of the Justice League is how they save the day, but ignore the consequences of their actions. In Priest’s Justice League run (you can see all the reviews of his run here on TBU), we see how the League is viewed in society’s eyes. They view them as saviors who are not like them. You have a billionaire, an Amazon, a Kryptonian, two Green Lanterns, an Atlantean, and a human cyborg: how can humanity relate to these people? They cannot!

That is why I am excited about the Justice Foundation; it seems like an organization that not only protects humanity but provides for them in a tangible way. The Foundation will share their knowledge, expertise, and technology to help advance humanity. If done correctly, this can be an incredible story.

I do not know how or where the Justice Foundation story will be told. The JLA title is canceled and there have been no solicitations (yet) talking about the Justice Foundation. Hopefully, we find out some news about it soon, because this is a story I would definitely be interested in reading!

Overall, I enjoyed the overall growth of each character in this title. The art has consistently been good. If I may, the variant cover of this issue is incredible! I almost want Francesco Mattina’s cover to be framed and hung in my house. It is so incredibly awesome!

P.S. My favorite quote in this issue is by Chronos directed at Ryan. He calls him a “dollar store piece of trash!” I dunno why, it just makes me laugh each time I read it.

Final Thoughts: This is a good issue for the finale of this title. I like the idea of the Justice Foundation, and I am eager to see this is incorporated into other titles.