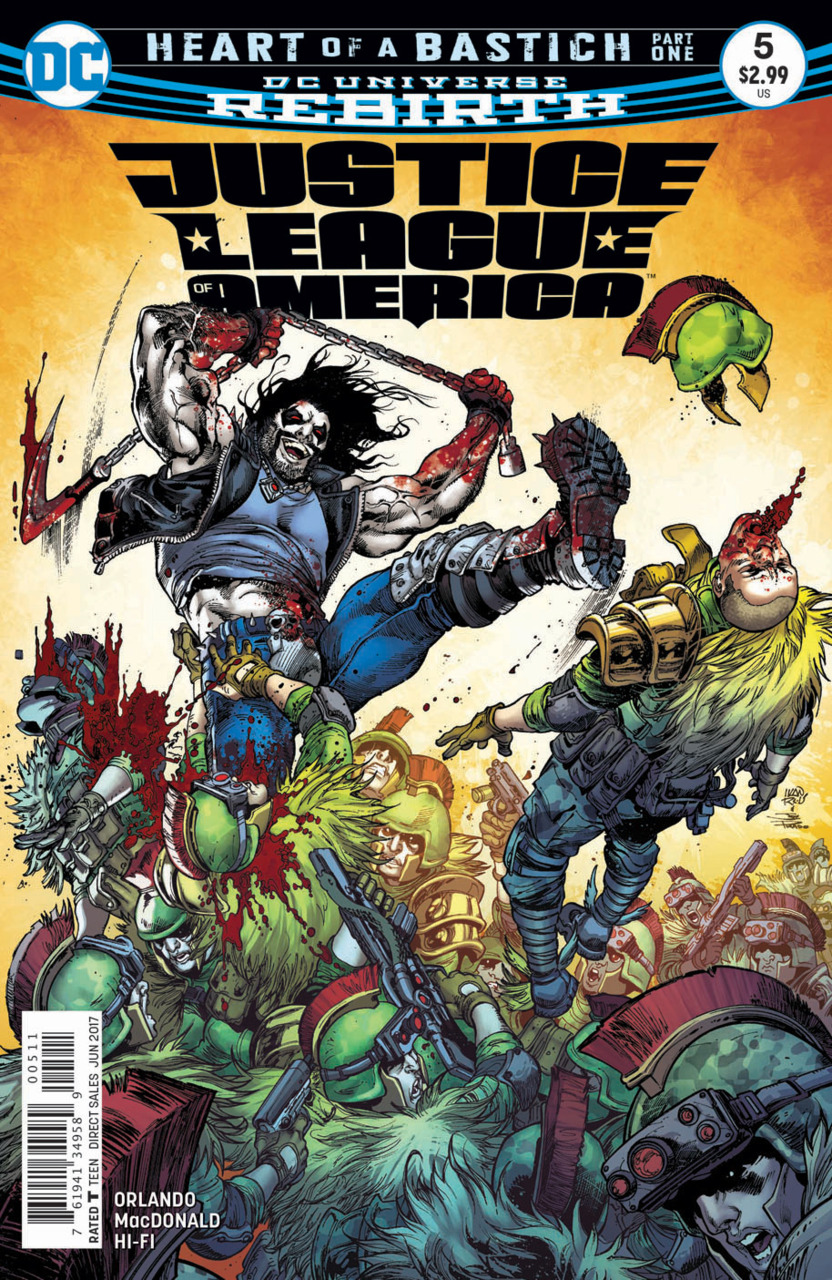 (Spoilers ahead) The story opens in Penn City where a kid opens a trash can to find a severed stoned head and an explosion follows. The story then moves to Happy Harbor where the JLA minus Batman are opening the former Secret Sanctuary to the public and announcing their mission statement to the media. After the press conference a reporter approaches the Ray and asks for his opinion about a cartel controlling Penn City. The story then moves to Penn City, where the cartel, lead by the Wonder Woman villain Nikos Aegeus, is selling weapons to Gotham City’s Whisper gang. Aegeus’ soldiers are then taken down by the JLA as they touch down in Penn City. Batman tasks Lobo with attacking Aegeus’ stronghold at the Penn City Mayor’s Mansion while the JLA liberates the city. Lobo fights his way through the mansion and ends up blown only to come across the Atom confronting Aegeus and ends up blown across town by one of Aegeus’ weapons. The issue ends with the JLA being swarmed by Aegeus’ legions riding winged lions, while the JLA appear ready to face them, wearing Greco-Roman inspired armor constructed by the Ray.

This issue is a mixed bag. Orlando continues to play with the themes he has set up and having the JLA open their headquarters to the public and announce a mission statement to the media is appropriate. It’s an interesting concept to have a super team try to be so openly transparent with the public and it continues to set the JLA apart from the Justice League with its ground level approach to a super team. It still feels strange that a team lead by Batman and featuring character’s like Lobo to be so media and public friendly, but at the very least Orlando seems to be aware of the contradiction and calls it out by having Batman not attend the press conference and having the media question the fact that a violent cosmic mercenary like Lobo is on the team. I do feel that the title would benefit from taking a break from these ideas and just having the team go off on an adventure, but its early days yet.

Orlando continues to pull from the B-list of the DC Universe with the use of Aegeus as the villain of this story arc. Orlando appears to be having a lot of fun with Aegeus and his Ancient Greece-themed cartel. It’s a very Batman ’66-esque choice and seeing the team face off against an army riding winged lions should be applauded for its sheer lunacy. I would like to see the JLA face off against a more conventional villain, but its early days yet and I want to see where they go with this.

While I appreciate the enthusiasm and ambition of this issue, the issue fails in its execution. Lobo appears to be the focus of this arc and I don’t think that Orlando has really got a handle on the character yet. The scene of Lobo storming the Mayor’s mansion while talking to himself comes off clunky and awkwardly written with Lobo talking to himself and spewing his various Lobo-isms as he wreaks havoc on henchmen and construction equipment. Lobo is the Tasmanian Devil of the DC Universe and was originally created to be a cartoonishly ultraviolent parody of characters like Wolverine and the Punisher and in the right setting, that version of the character works. While I wouldn’t advocate the character being turned into something that he’s not, I think for Lobo to exist in a book where everything else is being played straight, I think that that Lobo needs to be toned down and made less of a parody and more in line with the other characters in the book.

The big problem of this issue is Andy MacDonald’s art, which seems, frankly, a little amateurish for a title from a major publisher and seems better suited to illustrating a children’s book. There are pages and panels that show a lot of care and detail, such as when Aegeus is first introduced, but there is a large lack of detail to much of the art, including a significant amount of art where MacDonald couldn’t be bothered to draw any sort of a background that comes off as rushed and lazy. The art simply doesn’t live up to the high standard that other artists and put simply, its not worthy of the money that readers pay every month for this title.

In summary, JLA has started strong and still is playing with some interesting ideas, but is bogged down in its execution and art in this issue and as shown in the earlier issues of this series, they can and should do better.