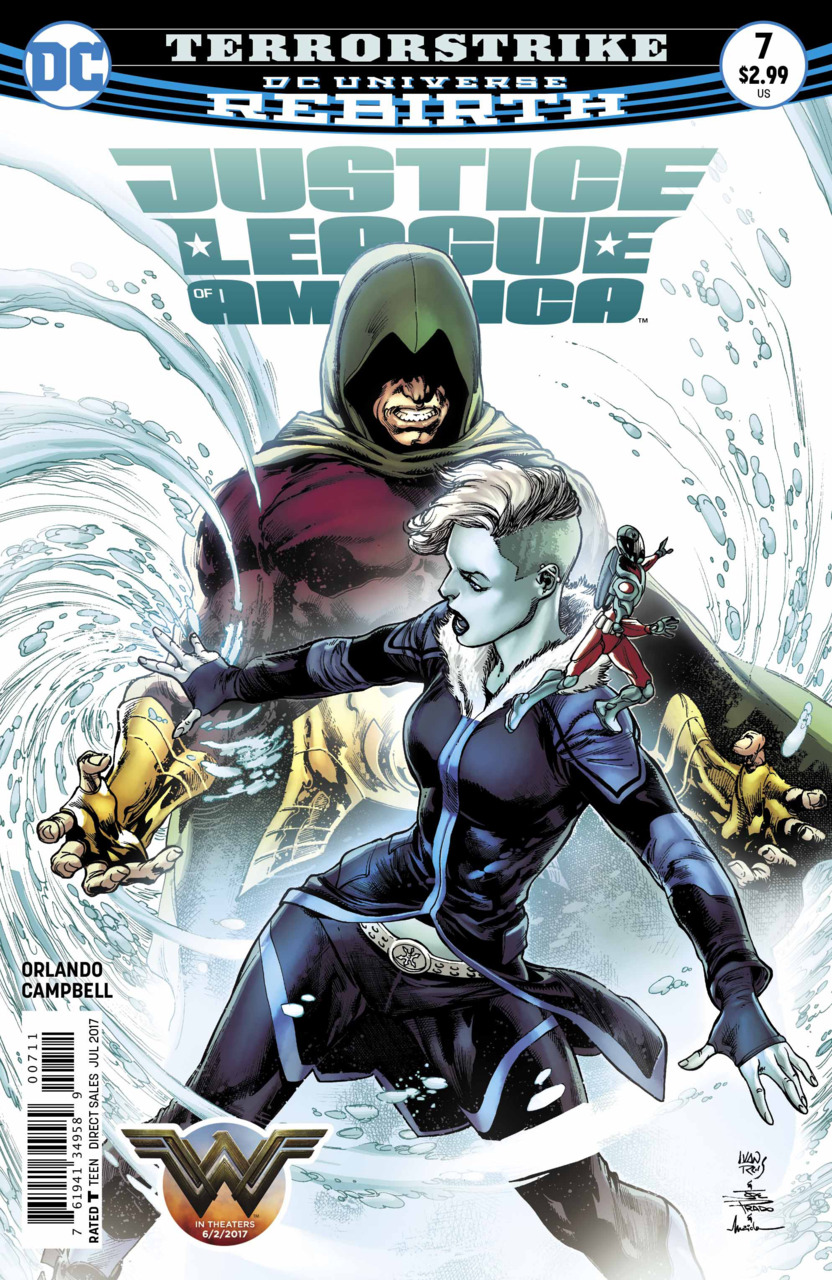 (Spoilers ahead) The issue opens at the JLA Sanctuary with Batman and the team’s new engineer, Xenos with Batman questioning the liberties that Xenos is taking with Batman’s instructions in the renovation of the Sanctuary and Xenos asking if Batman wants to lead an army or a team. The story then cuts to the Museum of Unnatural History in Manhattan where Frost and the Atom are researching the “Dorrance Glacier Boy”, an arctic corpse that has been mummified if in an arctic glacier to see if it holds the key to curing Frost of her heat sickness. Meanwhile, the villain Terrorsmith attacks the museum, turning the guards into monsters. Terrorsmith is after the alien parasite Glonth which is held at the museum, whose venom will increase his powers. Frost defeats Terrorsmith and forces him to turn the guards back to normal. The story ends with a quiet moment between Black Canary and Frost having a conversation about a potential romance between Frost and Atom and the story then cuts to the final page at Belle Reve Penitentiary where Terrorsmith finds himself in the custody of Amanda Waller.

The issue is largely a marked improvement from the previous story arc. The focus of the story is largely on Frost and the Atom investigating the Glacier Boy and their fight with Terrorsmith and these sections of the story are well paced and interesting. Orlando seems to be moving towards pairing Frost and the Atom together. It’s an idea that makes sense. It’s hard to develop some of the other characters like Batman and Black Canary when they appear in other books. Frost continues to be developing into the focus of this book and Orlando is striking an interesting balance between having Frost be a character looking for redemption and still not too far off from being “Killer Frost”, such as when she confronts Terrorsmith.

Speaking of Terrorsmith, Orlando continues to top himself in finding obscure villains to feature in his story. In this case, a minor villain from the quickly forgotten 1993 DC crossover storyline, “Bloodlines”. An enemy that turns people into nightmares is an interesting one. Orlando does continue to have an issue with dialogue, especially when it comes to the villains. Terrorsmith’s dialogue continues to stray into monologue territory which has a way of coming off as manufactured and unnatural. I did enjoy the inclusion of Glonth in the issue as essentially a talking severed head which I found to be a nice injection of a horror element into the story.

The main story is fairly strong, but is hampered by the use of the other members of the JLA in the story. The opening scene between Batman and Xenos is fine and continues to suggest the mystery of why Batman really formed this team and doesn’t overstay its welcome. There are quick scenes between Lobo and Black Canary and later the Ray and Vixen that don’t really have anything to do with the rest of the story and seem to only be there to show what they were up to during the main story. This feels unnecessary and forced. It’s an understandable pressure for the writer to give every single member of a team in an team book a quick moment in every single issue. While I do feel that a team book should feature adventures involving the whole team, in a smaller story involving a couple characters, it would have been more fitting to just focus on Frost and the Atom and give the other characters an issue off.

The art by Jamal Campbell is a marked improvement from the last few issues of the book and has polished and more animated feeling that suits the book and Campbell handles the action in the story well. I particularly appreciated the work on the guards turned monsters and I’m looking forward to seeing more of Campbell’s work.

In summary, while not perfect, the issue is a marked improvement for the series and I hope that the creators can keep moving in this direction.