Review: The Joker: The Man Who Stopped Laughing #4 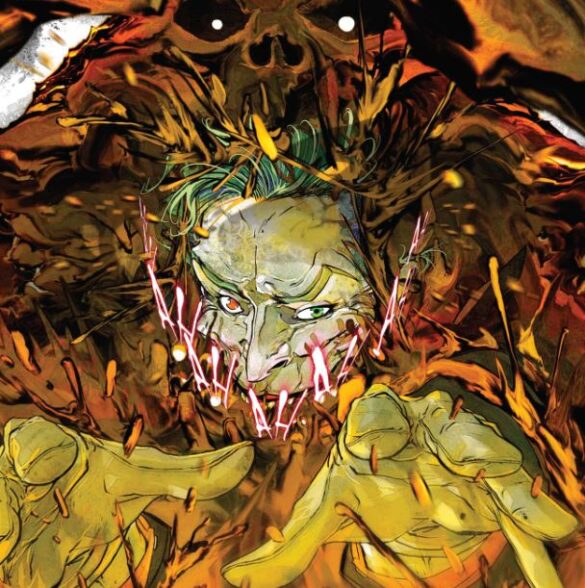 Overview: In The Joker: The Man Who Stopped Laughing #4, the Joker manages to make his way unseen through the halls of Gotham General Hospital while Red Hood and the police try to hunt him down.

Synopsis: The Joker: The Man Who Stopped Laughing #4 begins at Gotham General Hospital, as a worried police officer calls out to a wandering “Doctor D’Amico” to retreat to safety behind the police barricade. Ignoring the warnings, the doctor makes his way back through the panicked halls of the hospital, slipping his way up and into the pediatrics wing despite trying to escape at the end of the last issue.

Outside, a man in a red hood and trench coat subtly lights the tire of a police car on fire, only adding to the already mounting chaos. Using the panic caused and distressed shouts from those around him as cover, he takes the opportunity to slip into the hospital unseen.

Inside the room of several children, patients in the hospital, the Joker runs through a series of morbid jokes but doesn’t receive much positive response. Hearing shouts below, he quickly hides as men in SWAT gear and additional law enforcement officers storm the hospital and search through the rooms. The door to the kids’ room opens, and one of the agents stands in the doorway asking the children if they’ve seen the nightmare clown. The said clown motions silently to the children from his hiding space behind the door to not say anything.

The children respond negatively, and the agent leaves shortly after, followed closely by the Joker, who thanks the children and comments that they should ask for better toys. After all, parents never say no to dying kids.

In the men’s restroom, a police officer slowly makes his way through, checking it’s clear before using one of the urinals to relieve himself. Moments later, he’s beaten and unconscious, his uniform missing as the Joker slowly makes his way out of the restroom and to the elevator, covertly making his way to join the now motionless officer’s squad.

Just as the elevator doors open, the disguised Joker and Red Hood are both shocked to see the other person standing there, and a foot chase quickly ensues as the Joker crashes into a fellow officer just as Red Hood makes his way around the hallway, guns drawn and aimed at both men.

The confusion lasts only a moment as the officer, Powell, finds himself sandwiched between the gun in the Joker’s hand, aimed at his head, and the guns pointed at him by the Red Hood. Ignoring Red Hood’s command for the Joker to drop his gun, the clown uses Powell’s radio to inform the other squads that the Joker was spotted exiting the hospital via the back entrance.

The standoff is interrupted by the arrival of a shocked nurse, who, under the Joker’s command, makes her way back into the room she came from to open the closet full of drugs. Turning to the Red Hood, the Joker says the situation is simple. Jason needs to drop his guns, or the officer dies.

Jason demands to know how the Joker has convinced the whole world that he’s really in L.A. doing organized crime while he’s here in Gotham, but still complies with his demands and drops his gun to save the officer’s life. Elated to hear that Jason thinks the Joker is the Joker, he shoves Powell into Jason, and they, along with the nurse, all go crashing into the small closet.

Leaving them there, the Joker stops to answer Jason’s demand to know why the Joker isn’t trying to kill him again, to which the Joker replies that he doesn’t like telling the same joke twice.

Moments later, the hospital floors are again swarming with armed officers, who discover Powell and the nurse with no sign of the Red Hood.

Inside the room of an elderly, sick woman, the Joker, in an effort to remain hidden, answers her confused cries. Moments later, the room door is flung open, and the officers enter, only to find the woman dead, smiling peacefully with the window ajar and no sign of anyone else. They lost the Joker.

Analysis: Vigilantes and police officers alike are bested by the Joker as he continues to elude all those trying to hunt him down despite their best efforts. The story in The Joker: The Man Who Stopped Laughing #4, written by Matthew Rosenberg and illustrated by artist Carmine Di Giandomenico, continues to be narrated by a somewhat crazed, nihilistic voice that I mostly skipped past quickly to follow the actual dialogue, which, unfortunately, left me feeling mostly unsatisfied as nothing really happens.

The Joker manages to sneak his way back into the hospital that supposedly has a bomb hidden somewhere (yet police officers regularly enter it and search each floor despite the bomb threat), followed closely by the Red Hood. Jason is determined to make good on his promise to kill the Joker once and for all but is prevented by the Joker’s threat of possibly killing a police officer. The interaction ends with…nothing happening except the Joker getting away and Jason disappearing.

The interaction with the Joker and children additionally didn’t make much of any sense to me; if the Joker has been around Gotham for so long and with the number of threats by supervillains the city sees daily, it is most likely safe to assume that kids are at latest somewhat familiar with the Joker’s overall look and feel. Why, then, did they help him escape? Why not turn him over to the authorities? Lastly, the scene at the end between the Joker and the elderly lady who passes away did not come across as very relevant to the story other than to possibly showcase the Joker’s character.

Synopsis: As the backup in The Joker: The Man Who Stopped Laughing #4 begins, the Clown Prince of Crime has done it again, stealing all the water from the Gotham River with the help of his trusty henchmen, Jackanapes and Gaggy. He’s brought to a halt by Zatanna, who is more than affronted by the Joker’s offer to start a family with her. Her response is to cast a spell on him, leaving the Joker… pregnant.

The Joker and his henchmen visit Doctor Phosphorous in the hopes of getting the baby checked out and out of the Joker; given that they have no idea where the baby will come from, the process is likely to be uncomfortable.

Before anything else can happen, the Joker vomits a steam of mud-like substance that takes the form of some vaguely humanoid shape, starts wailing, and takes off running away. Seeking to find and kill it, the men (and..others) take off after it.

Twenty unproductive minutes later, the men (and gorilla) are still searching. They locate the mud creature and are shocked to find it’s transformed into a mini version of the Joker.

Several weird weeks later, Zatanna, just finishing a magic show performance, is surprised when the Joker pays her another visit. He tells her that, ultimately, they would have made a wonderful family; Zatanna is shocked when the Joker introduces her to his mini-me version and declares that they, the Joker and Zatanna, did it! They have a son.

Analysis: This is officially one of the weirdest and somewhat uncomfortable short stories I’ve ever read. I’m extremely curious to know where this inspiration comes from for the creative team, writer Matthew Rosenberg and artist Francesco Francavilla because it’s quite bizarre.

The concept is not only strange but also missed the mark of being comedic and landed more in the “I would be happy never to have to see the Joker being checked up on to give birth” again realm.

I suppose this extra story could very well be some people’s cup of tea, but I would not ascribe that to myself as the concept of the story is too uninteresting and strange for me, and the art style is not preferred. Hopefully, they don’t get weirder from here!

The Joker: The Man Who Stopped Laughing #4

I did appreciate that Red Hood risked his life and chose to save the life of the police officer, despite the threat it posed to his own life. Although this issue didn’t really do it for me, I’m really hoping the next installment in this series might provide some more relevant plot developments to really get the series rolling and serve to be a bit more entertaining.