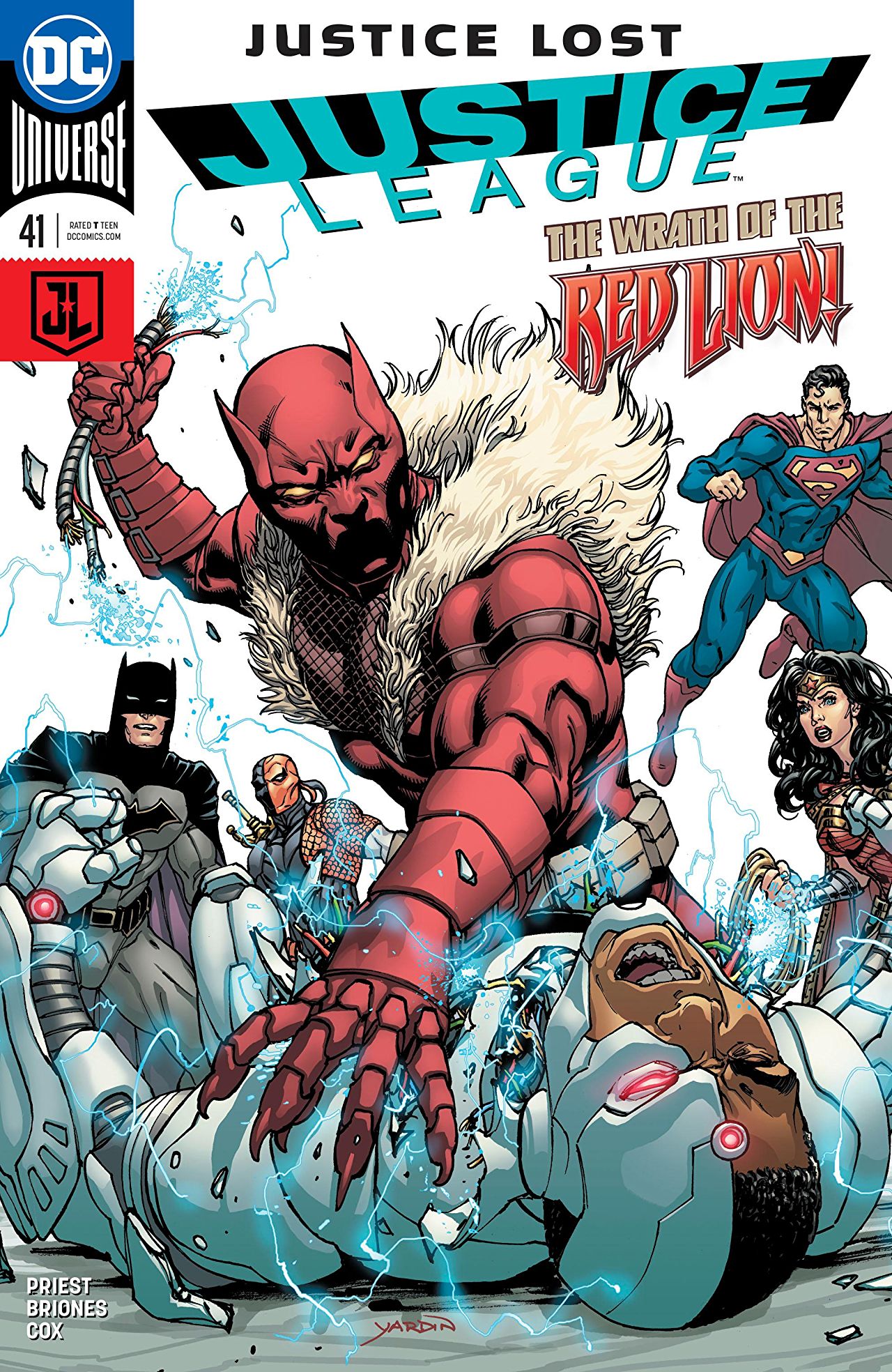 Overview: After the Watchtower crashes to Earth, the Justice League desperately tries to stay one step ahead of their legions of enemies.

Synopsis (spoilers ahead): As Green Lanterns Jessica Cruz and Simon Baz zoom through space on their way back to Earth after helping J’onn J’onzz, Simon is still freaking out over Superman’s invitation to grab lunch. Jessica tries to sidetrack him, eventually telling him she kissed Batman.

In East Africa, Deathstroke has located the fallen Watchtower station for his frequent employer the Red Lion.

Superman is ensuring that the massive crowd surrounding the crashed station doesn’t break into war over their historical grievances. Superman believes that he is in the right to enforce a ceasefire (with the Flash’s help to disarm the crowd), but their leader, Kamala, seemingly armed with power armor or cybernetics, tells him that she will be waiting after the League is gone.

Cyborg vents some frustration with his dissatisfaction with his own performance as the leader of the League to the Flash, and his worries about the threat the Fan poses. Wonder Woman helps feed the people sheltered from the armed mob, but the ominous sight of a Lexcorp airship arriving disrupts her work.

Aquaman is investigating the Fan’s trail, but discovers that the Fan used someone else’s identity – the real tech who helped build the Watchtower. Superman confronts the Lexcorp forces but discovers that Red Lion has claimed the right of salvage, and enlisted Lexcorp to back him up.

In Washington DC, the chairman of the committee which has been “investigating” the Justice League during this arc sees the news and tells his staff to investigate what the Red Lion wants.

Red Lion, in the meantime, is beating the distracted and sabotaged Cyborg as his teammates fight off the Lexcorp goons.

Batman confronts the Fan, having tracked him to his base. The Fan admits defeat but tells Batman that he knows too much to just put in jail.

As the various League members struggle with keeping the crowd safe during the conflict, Diana is struck by a ricochet off Superman’s chest. Red Lion defeats Cyborg, knocking him out and dragging him towards the downed space station he’s claimed as his own.

Analysis: With two issues left to go, Priest has brought everything to a desperate crisis. The League is split apart – Batman, Aquaman, and the Lanterns all separated from their team, and the main body is trapped in Africa between a raging tribal conflict and the darker machinations of their enemies the Fan, the Red Lion, and the politicians scheming in the background. Though he continues stringing the strangely chosen “Jessica Cruz kissed Batman” plotline without providing any explanation (particularly odd considering the announcement of the Batman/Catwoman Wedding Album, indicating the significant of the BatCat marriage in the coming years), Priest has really settled into the voices and powers of each member of the League, as well as his chosen antagonists and supporting characters. It really is a shame that Priest is only providing ten issues of this series, as the complexity and polished nature of his work really rewards the readers’ attention.

Philippe Briones returns, and his work is stronger than his last issue for this series. The characters are all strongly appealing, as has been consistent with all of Priest’s collaborators, with simple but assured linework complemented well with Jeromy Cox’s finely chosen color palette. The dusty scope of Africa contrasts with the vividness of deep space and the dark shadows of American cities perfectly.

Final Thoughts: The huge number of plot threads Priest has woven begins to unravel in a final destruction.