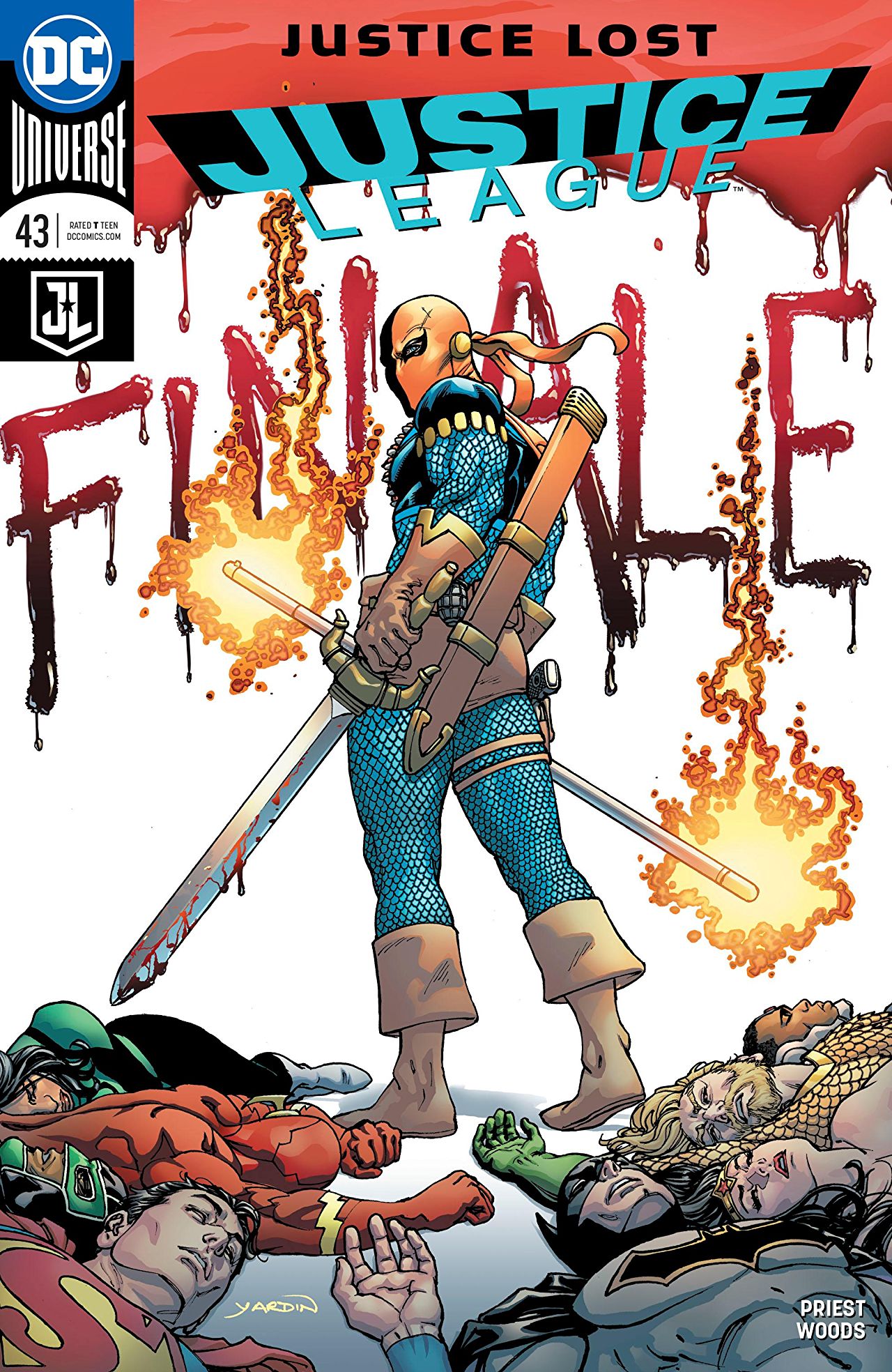 Overview: In an ever-evolving finale to “Justice Lost”, the Justice League has to come to grips with a changed world.

Synopsis (spoilers ahead): In the present, after all of the main action of the book, Green Lantern Jessica Cruz walks into the new JLA Research Center, and finding herself alone, has a bit of fun chairing her own meeting.

The week before, Deathstroke faces off against the League, having just killed the Fan and “solving” the League’s problem of his vast knowledge of their secrets. He then explains that the Red Lion drove the refugees into the Watchtower’s crash zone to create the exact dilemma that is paralyzing the League now. He says that the refugees and rebels have been slaughtering each other for generations. Cyborg stands in his way and proposes a plan.

Flash, Kid Flash, and Raven work together to save Wonder Woman, who has lost a catastrophic amount of blood. Raven warns Flash that though her magic can help, Diana must fight herself to survive against Thanatos, God of Death.

In Africa, Deathstroke begins systematically taking down the League. Having left a pile of League bodies on the ground, he turns to the crowd, which are running in terror. He then turns to Red Lion, and repeats his order from many issues ago: “Sign the check.”

Wonder Woman realizes that she resents death for all the innocent lives it has taken, and in realizing that, gains the ability to fight again. She awakens, and Flash rushes her back to Africa, where she sees the “carnage,” and attacks Deathstroke in rage. However, it was a ruse – a way to make Deathstroke’s threat so terrifying that the enormous crowd would leave of its own volition. Cyborg’s plan all along – and it worked. But Cyborg also says that the League, for all its power, can’t change human nature – the nature that drives us to kill as well as to be heroic. The League leaves with this sobering knowledge.

Days later, in Metropolis, Simon Baz, Green Lantern, and Superman have lunch in Metropolis. Simon freaks completely out and runs away. Clark calmly orders the salmon.

At Wayne Manor, Jessica Cruz stands outside the door with balloons and champagne, trying to figure out how to deal with her kissing Batman many issues ago. The door is opened by Selina Kyle, smiling. She says Bruce told her about the kiss and invites Jessica in to watch reality television and drink the champagne.

Batman and Cyborg meet, and Batman tells Victor he needed to take the lead to be forced to grow into the leader he could be. Cyborg punches Bruce, who tells him the first meeting in the new building is on Saturday. Superman offers him a hand up, and they soar away.

In Africa, Diana has set up a one-Wonder Woman no-fly zone over Red Lion’s territory, and he ruefully contemplates the failure of his plans caused by his own ambition.

Back at the beginning scene of the book, Vixen walks in on Jessica chairing her “meeting” of one, and they both assume they’ve been left out. But then, the League teleports in, Martian Manhunter offering a hand to them and telling them the universe needs their help. Jessica eagerly leaps into the fray.

Analysis: Christopher Priest, a veteran writer of so many comics and editor of many more, has done some very interesting things with his ten-issue Justice League run. He’s explored the idea of the League as a group of veteran crisis management experts – a workplace drama – and put them in situations in which their godlike powers cannot change the fundamental cracks in human nature. Some have complained that it’s not satisfying to have the League not winning the day – but that misses the point of what Priest is saying. In the best tradition of all superhero writers, Priest is showing us that the League is made of up humans who struggle with the same limitations we do, even if their powers are much greater than ours. In doing so, he hammers home John Ostrander’s point that a superhero story doesn’t make us wish for a superhero to save us – they inspire us to be our own heroes. Nowhere is that clearer than Wonder Woman’s arc in the past three issues. From her facing her own mortality, to her rage at the injustice of innocent death, and then her one-woman safety zone in a terror-filled African nation, she has chosen a hard way – a way of responsibility that her power demands.

Priest has constructed nearly every one of these ten issues with the ongoing thread of the League’s troubles in the world alongside an issue-length “puzzle” to solve, usually involving a really cool use of powers. This time, it’s the clever plan by Cyborg to use the appearance of Deathstroke defeating the League to disperse the murderous crowds. At first, it seems like Priest, also writing the Deathstroke solo title (and highly recommended), is just pandering to his pet character – but then we realize that Cyborg is pulling the strings, and it’s not another situation where Deathstroke proves way more powerful than he should.

Artist Pete Woods, a longtime veteran of DC comics, again provides the almost unimaginable job of pencils, inks, and colors, showing true craftsmanship in all of them. Proportions are all maintained, the appealing, blocky nature of his facial designs and expressions, and his clear storytelling layouts maintain a sense of consistency almost unbelievable considering the fact that he has done all of this work by himself for six of ten issues in only five months. I wholeheartedly applaud Woods, Priest, and their editors for this amazing feat of scheduling and talent, and hope we see much  more of both Woods and Priest in the near future.