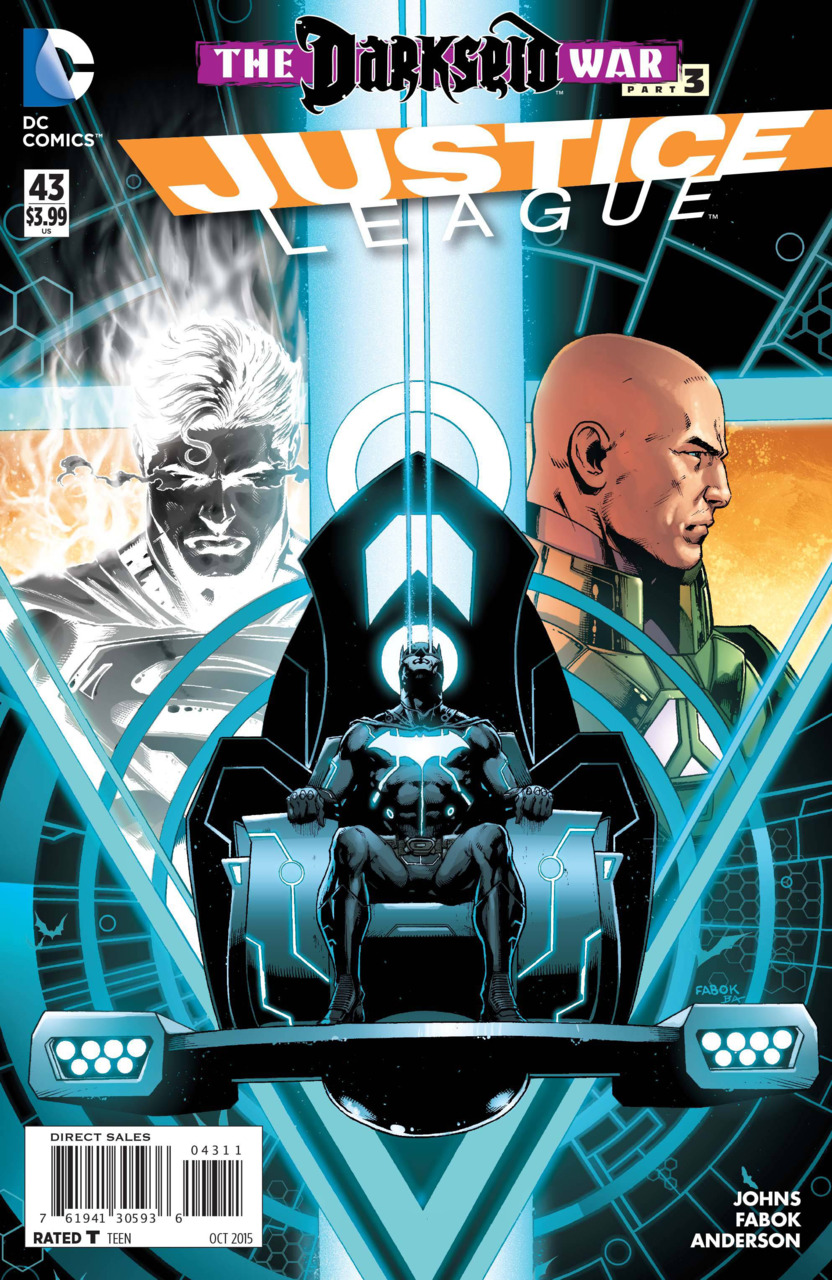 This issue begins with a disturbing scene where Kalibak, son of Darkseid, kills a hound of Apokolips and licks up the blood after the kill. He is interrupted by Steppenwolf who tells Kalibak that they have been summoned by Darkseid to prepare for war on Earth. The scene ends with Steppenwolf declaring “For Darkseid” to which Kalibak scoffs and says “For Kalibak”.

Returning to the Rock of Eternity, the Justice League is still reeling from Batman’s transformation into a New God. Batman is finding that “his” Mobius Chair does not contain information they need regarding the Anti-Monitor. Hal Jordan insists that Batman get off the chair so he does not risk permanent damage to himself. Batman dismisses Jordan’s concerns while justifying that, with his extensive history with Darkseid and Apokolips; he should sit on the chair.

On Apokolips, Superman and Luthor find themselves near a slave camp and decide to get a mother box from a slave master to return home. Superman feels that there is lead in the air because he is having trouble using his x-ray vision. Luthor analyzes the air and states that there is very little lead. The two are then attacked by a horde of slaves. Following the attack, Superman is bleeding from multiple wounds he received during the attack to which Luthor reveals is due to the lack of sunlight.

Back on Earth, Grail is conducting a ritual that will bring Darkseid to the Anti-Monitor to begin the war.

Batman is explaining to the League who Grail is and that her mother was an Amazonian assassin. Mister Miracle arrives via boom tube to tell the League they need to go to Earth to force the Anti-Monitor off the planet before he and Darkseid destroy it.

Batman learns from the chair that he needs to travel to the depths of the Multiverse to find the answers needed to stop the Anti-Monitor should the League’s plan fail. Hal volunteers to join Batman who gives the obvious “I can do it alone” line that we all expected him to say. The League leaves the Rock of Eternity via boom tube on their respective missions.

The Justice League confronts Grail and the Anti-Monitor on Earth. Wonder Woman orders them to leave but Darkseid arrives with his parademon army. The shadow demon army of the Anti-Monitor faces off with the forces of Darkseid.

Ending the issue, there is a charge between the two armies as well as the Justice League. Superman and Luthor are running out of options as they fight parademons and Luthor decides to throw Superman into the fire pits of Apokolips to recharge his cells with solar energy. However, “Dark” Superman rises, enraged, from the pit and has his sights set on killing Luthor.

I had a great time reading this issue. Between the storytelling and the fantastic artwork, I could not have asked for a better issue to finally begin the war. Admittedly, I was mostly excited to see the new Bat-God going into reading this issue and I was not disappointed. He had the right amount of arrogance that would come to someone who had just attained godhood and infinite knowledge. It will be very interesting to see his journey with Hal Jordan in the Multiverse unfold in future issues.

I’m really enjoying the monologue of Wonder Woman over the past few issues. Her comparison of the League’s struggle to the Odyssey helps build tension and connects this story to the great epics of Greek mythology. Having her as a central character and narrator was a smart choice by the creative team.

Speaking of the creative team, Johns and Fabok are doing a fantastic job in delivering an epic story that continues to deliver with each issue. With the Greek myths as references, Johns seems to be shooting for a story of mortals pitted against the gods.  The story has an added element of gravitas and suspense with our seemingly unbeatable, god-like heroes reduced to mere mortals by far more powerful beings like the Anti-Monitor and Darkseid.

The art is certainly a strong point for me and has been since Fabok joined with Johns on the title. Each character has their own distinct look and the penciling really seems to bring them to life on the page. Fabok nails the transitional panels where characters “boom” into the scene. Notably, the one page spread of Darkseid arriving with his army is just awesome.

Overall, this is my favorite issue thus far due to its ability to build excitement and deliver cinematic panels. The art is fantastic and Fabok gives us great character designs like Bat-God and Kalibak.  Finishing with a head on charge between the Justice League, Darkseid, and the Anti-Monitor creates the perfect cliffhanger and leaves me counting the days until the next issue.