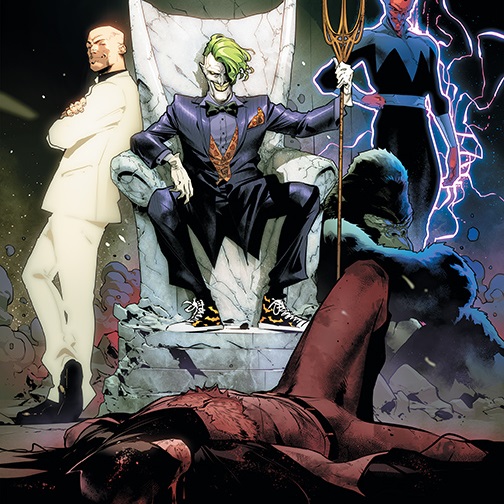 With the Aquaman movie right around the corner leave it to the folks over at DC to board the hype train with an Aquaman event of their own. Coming this October is Justice League/Aquaman: Drowned Earth, which will start with a 48-page one-shot written by James Tynion IV with art by Howard Porter. The story centers on the Ocean Lords, an “ancient and powerful deities with an ax to grind against both Aquaman and Wonder Woman and a plan to flood the world. As the rest of the League races to stop the waters from rising, Arthur faces off against his nemesis Black Manta in a must-win battle if he is to retain his connection to the world’s oceans.”

Following the one-shot, the story will continue in Justice League #11 written by Scott Snyder with art by Francis Manapul before Tynion takes over in issue #12 with art by Frazer Irving. Meanwhile, Aquaman and Wonder Woman will learn the key to defeating the Ocean Lords in the pages of Aquaman #42 written by Dan Abnett with art by Lan Medina. The entire event will culminate on November 28 with Aquaman/Justice League: Drowned earth #1 where “Aquaman must find a way to reclaim the power of his birthright or watch the rising tides drown and corrupt everything that he holds dear. With the Justice League on the ropes and the fate of the world at stake, Arthur may have to make the ultimate sacrifice to restore balance to the land and the seas!”

The event will end just before the start of December which happens to be when the film will be released. DC is clearly bringing Aquaman into the spotlight before the release of the movie and this event seems like it will be epic enough to get new and existing fans eager to buy tickets.

Justice League/Aquaman: Drowned Earth #1 will be on sale October 31.