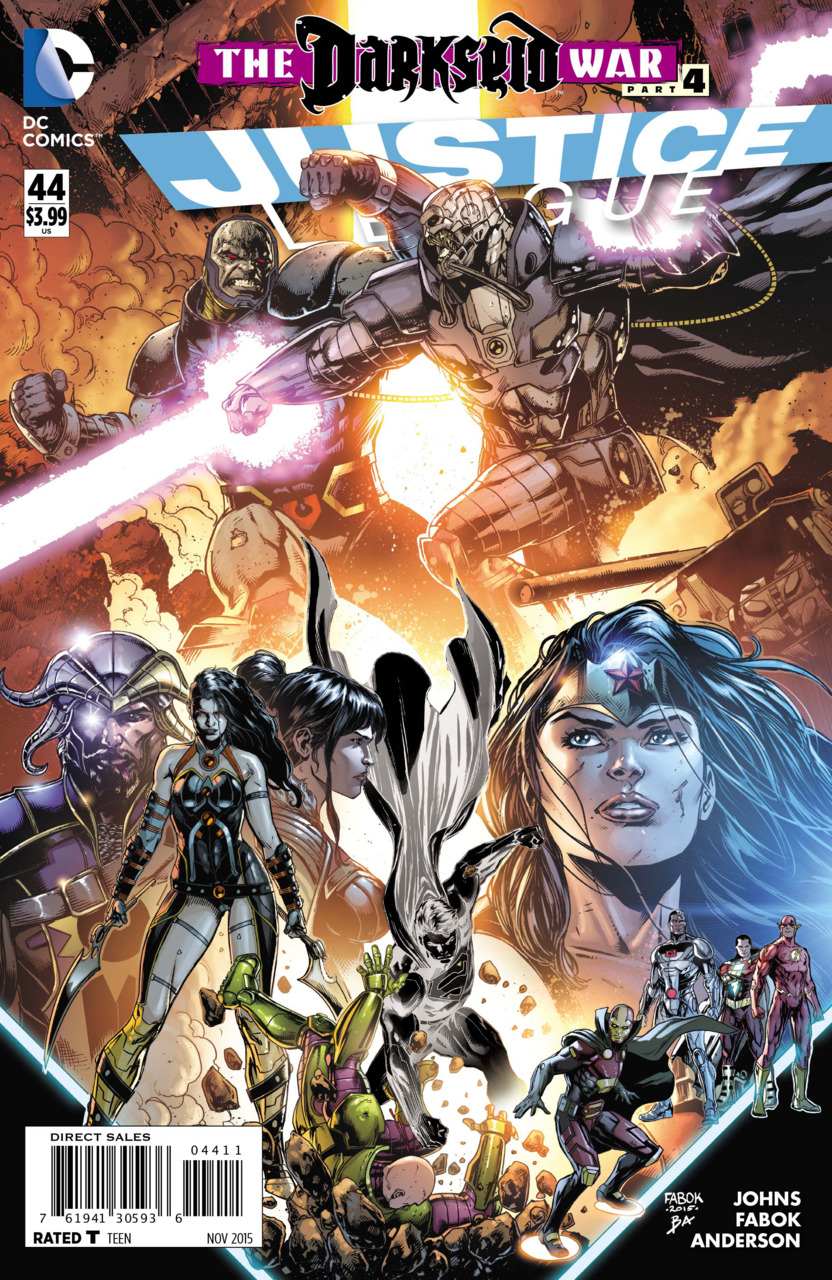 Opening with Wonder Woman describing Gelos, god of laughter, we see contrasting panels between the faces of Joker and Bat-God. We see that Bat-God and Green Lantern are on Earth 3, home of the Crime Syndicate, which was destroyed by the Anti-Monitor.  Bat-God tells Green Lantern that Anti-Monitor had absorbed the energy of the dead but still did not know why he wanted this war with Darkseid. Bat-God then told Green Lantern over the next few panels about how Green Lantern is not the hero and that he owes his accomplishments to the ring.

On Apokolips, “Dark” Superman emerges from one of the fire pits and is fully charged now but appears changed. He wants to finish the conversation Luthor was having with him in the previous issue about not being human at all. During the talk, Superman easily destroys a group of parademons. Turning his attention back to Luthor, he tells Lex he has always held back in fights with him and raises his fist. Later in the issue, there is a panel showing the two fighting each other.

On Qward, Bat-God and Green Lantern fend off an attack from native soldiers. Bat-God discovers that the Anti-Monitor created the Mobius Chair and that “Mobius” had been his name. He also informs us that Mobius discovered the center of the Anti-Matter Universe and became the Anti-Monitor for what he unleashed.

While Bat-God is revealing the Mobius’ history, the Anti-Monitor takes control of Flash and merges him with The Black Racer to become the host of Death. As Wonder Woman yells for Flash, the Anti-Monitor directs Death towards Darkseid and uses The Anti-Life Equation to kill Darkseid. We see the reactions of various characters to this shocking death and are left with a final panel of Darkseid lying dead in the rubble.

With that ending, it is hard to guess what will happen next.  It seemed likely we would be getting a major death or reveal of some kind given the warnings from Jason Fabok about not skipping to the end of this issue. However, I know I did not predict the creative team would kill off Darkseid in the “Darkseid War” in only the fourth issue of this arc.

For shock value alone, this issue was great with the death of Darkseid, Flash being merged with The Black Racer to form Death, and the Anti-Monitor in possession of the Anti-Life Equation. These major plot developments were accompanied by iconic imagery that will surely be emblazoned in many readers’ memories.

As always, Fabok nails it on the artwork. His attention to detail when drawing facial expressions does a lot to express the intense emotions of this issue’s characters. A few scenes, in particular, stood out to me where the art truly shines. The first shot of the League standing on the sidelines while Darkseid and Anti-Monitor exchange blows is great because it displays how much more powerful these two beings are compared to the Justice League. When Death runs through Darkseid as the Anti-Monitor blasts him is a terrific panel. The final shot of the dead Darkseid was impressive, as well, as it shows a powerful being, like Darkseid, succumbing to death as anyone else but still appearing no less god-like as his molten lava-like blood pours out of him.

Johns gives us great writing again in this issue and it was noticed in both the overall dialogue and monologue of Diana. Again, we are given a background of Greek mythology to compare events from this issue to that of ancient Greek gods. As it did in the previous issue, this serves to elevate the tension and deliver a powerful payoff in the ending with the ominous death of a god.

This issue certainly gave us a lot to think about what is to come for both our heroes and villains in this storyline. I was certainly happy with the game-changing ending and can’t wait until next month to see the fallout from such a massive event.