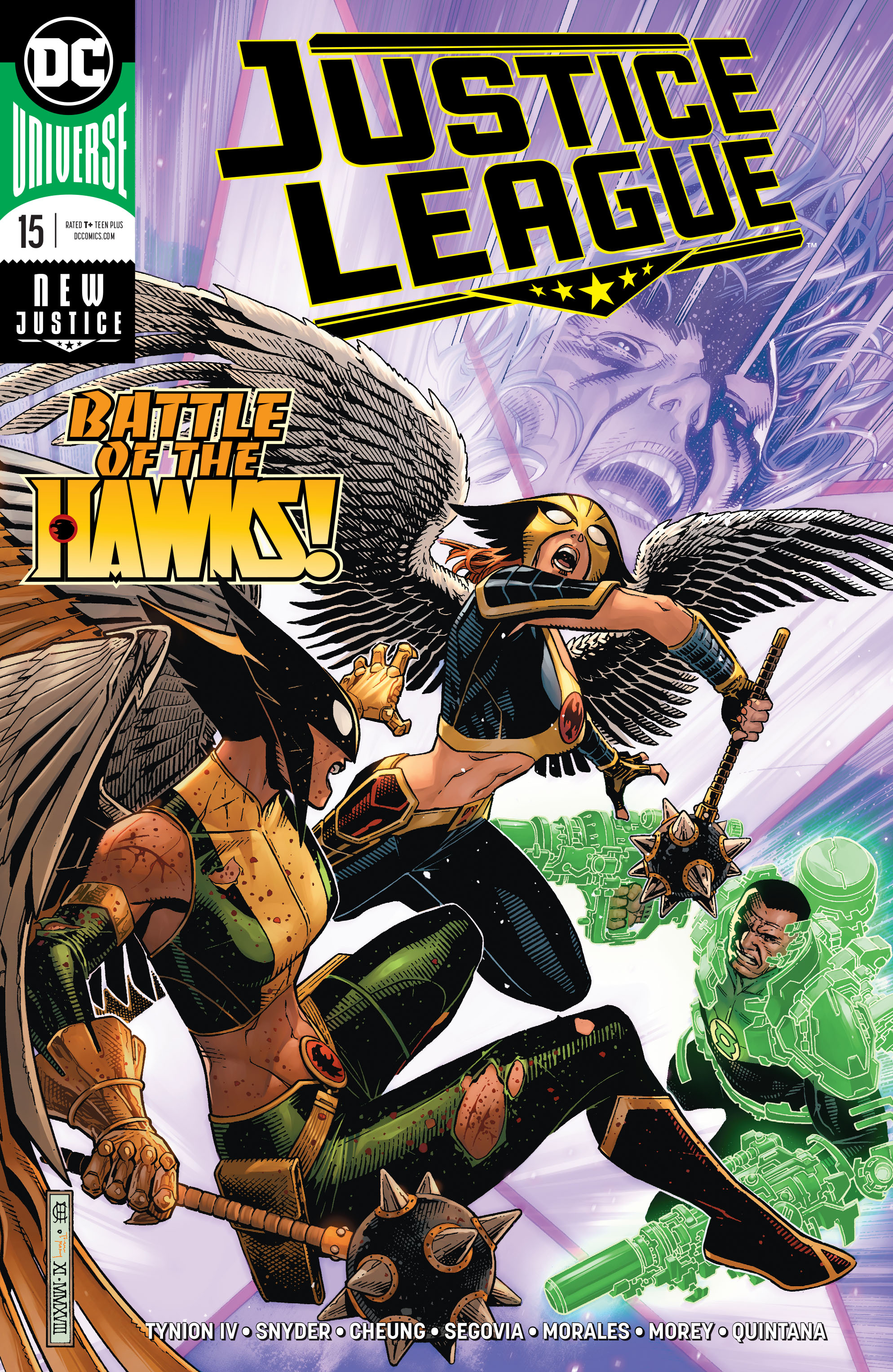 Overview: The Justice League perform a heist on Thanagar Prime that unlocks the secrets of the universe.

Synopsis (spoilers ahead): At the Hall of Justice, Will Payton is about to explode. The solar energy he is emitting is powering Superman to levels he is not comfortable with. Starman screams, “The universe is screaming, it needs to be healed! You must understand!”

Back on Thanagar Prime, Shayera will do whatever it takes to protect the secrets they have in their vaults. She orders Katar to kill Kendra. She’ll see her again in her next life. Suddenly, The person Katar is holding isn’t Kendra; it’s one of her hawk guards. She commands the other guards to go to the vault and she tells Katar that they’ll have him fully restored soon. Katar doesn’t answer.

Miles away, three guards land in a closet. Martian Manhunter takes their outfit for a disguise and they discuss their plan of attack. They also discuss amongst themselves the ethical predicament they find themselves in; particularly John Stewart, who the Guardians of the Green Lantern Corps have a treaty with Thanagar Prime. Should he go through with this, he’d be breaking that treaty and possibly shunned by the Corps. He decides to help the Justice League do the right thing. It’s not like his ring can be taken away. J’onn notes how Karter’s mind didn’t have any mental blocks, but that he couldn’t access his mind. As far as breaking into the vault, J’onn has a plan, as he has hidden on Thanagar Prime undercover for some time.

They can’t put up mental blocks and he can’t shapeshift – they have technology that protects them against that. They don’t mess around either. Before allowed entrance into the vault, they plant a chip inside your arm. If they find you disobeying orders at all, you will blow up. We see a group of aliens trying to deposit a large shard of kryptonite until they can harness its ability to absorb and convert solar energy. They allow them into the vault, and when in position, Hawkgirl and Martian Manhunter bust out of the kryptonite – of which was a construct from Green Lantern. The Green Lantern Corps show up, but the League members continue to push forward.

Martian Manhunter makes his way inside the vault while the other two continue to fight. Inside, he finds the Martian Keep, who informs him that Katar Hol and Thanagar Prime are lies. But their secret that has the Guardians on board, is that this multiverse is a lie. There was one before it. And its creator, Perpetua, is coming back.

Analysis: Scott Snyder and James Tynion IV deliver an excellent script this issue. It was paced wonderfully and the tension it built throughout was well done. I liked J’onn’s use of powers in this issue. He’s typically talked up to be this powerful character, we see his power set, and yet they are usually underutilized. John’s powers are a bit confusing to me here. The construct was clever, but I didn’t think he could actually materialize objects. Was that really kryptonite? Also, if he can just cut off oxygen to the brain to knock someone out, why doesn’t he do that every time he fights? And then we get to the Martian Keep, who informs J’onn of the multiverse before the current one?! Is that the pre-Flashpoint universe? I love the idea of using that as a story point. The possibilities that open up are amazing to me.

Jim Cheung, Mark Morales, and Tomeu Morey’s art was incredible. I love Cheung’s style. Morales’ inks are a great match. I like the line-work he does. Morey’s colors look great. I love the softness of how colors. I’m just sad they didn’t get much in terms of page count because I really like their work. Stephen Segovia and Wil Quintana did a solid job here. At times, the backgrounds were very weak and disinteresting, but for the most part, they were pretty good. Segovia’s faces are sometimes stiff, but he was much more fluid here than the last issue. Quintana’s colors are very bright. It definitely makes things pop, but there are times he should pull back. Tom Napolitano letters here and does a solid job. The guy continues to do consistently great work.

Final Thoughts: We get a lot of momentum here in this issue, the standout being the Ocean’s Eleven-style heist that permeates the entire book. The team-up of these three characters and their stepping into the spotlight was welcome to JL readers.