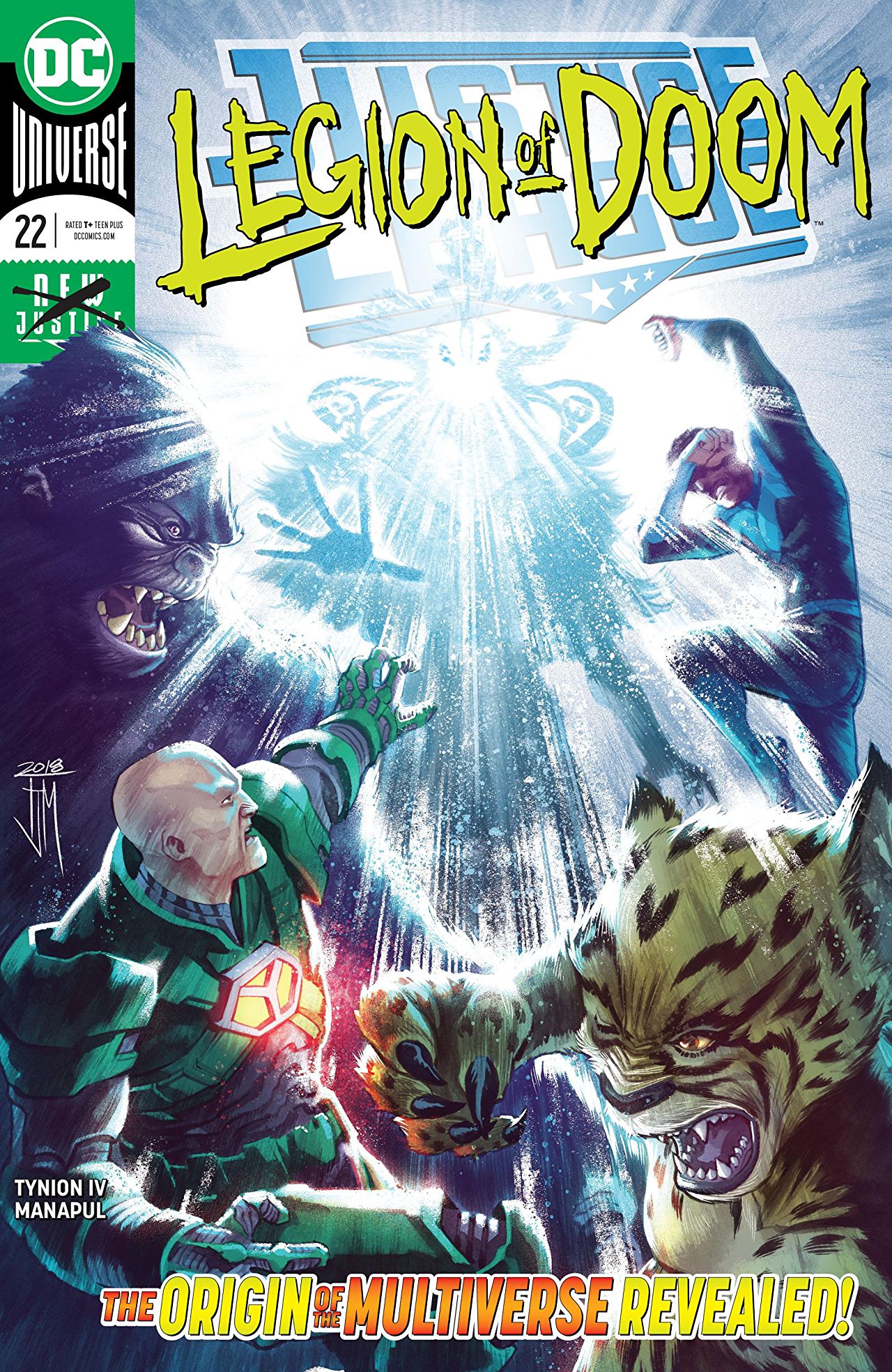 Overview: As we travel twenty billion years ago for the history of the multiverse, could Perpetua be playing the ultimate long con?

Synopsis (spoilers ahead): Now – Mera and Starman need to evacuate Earth as it is being unwritten by Mxyzptlk. The Legion of Doom shows up, uses the still force to stop Mxyzptlk and saves the world. They also have their own fifth-dimensional imp – Bat-Mite.

In the Hall of Doom, Perpetua’s body is restored, but her multiverse is broken, and she knows her children are worsening it.

We then travel back twenty billion years ago where we see that Perpetua has built the multiverse with the aim of pleasing the “source” of her power. Her three children are meant to monitor the three realms of Dark Matter, Positive Matter, and Anti-Matter. She says her role is to keep her children alive.

Fifteen billion years ago: The World Forger creates Barbatos. Earth is at the center of the Prime Universe, but World Forger did not create it. Perpetua is questioned by Mar Novu and says he has overstepped his bounds. She is risking infinite lives to overcome cosmic judgment.

Two hundred thousand years later: Perpetua is imprisoned in the source wall so all of creation isn’t lost with her because of her quest of doom and her selfishness. The multiverse is started anew, and Perpetua’s children are reformed and born again all while watching her rise. The Anti-Monitor lashes out and vows to destroy Infinite worlds because Mar Novu made his role useless now because of the existence of the source wall.

Now – After many, many years Perpetua has been reformed, and has set in motion her plan of using the Legion of Doom as the vehicle of her own doom.

Analysis: This is a Legion of Doom issue, so we get James Tynion IV as the writer. While some will criticize and bemoan his “wordiness” I won’t. I think he uses his words to his advantage. Tynion tells a great story of the history of the multiverse. The title of the issue should be familiar, as anything with the word “Crisis” will perk up the ears of DC fans, and by the end, we have an explanation of why the Anti-Monitor is such a big part of the many crises with the history of the DC Universe. Tynion also does a great job of explaining Perpetua’s children, and what their roles in the multiverse were intended for.

The threads of this story are far reaching. Trapping Perpetua in the source wall to prevent her doom cause Anti-Monitor to destroy infinite worlds because he felt slighted by his brother. It’s a very well thought out and executed story.

Jarro makes a very brief appearance and once again adds a bit of humor.

I’ll also be very curious about how this leads further into the Year of the Villain, and if it’ll be just one villain or many.

While Justice League is the top “team” book for DC, I really think the book could benefit from some downtime. The frenetic pace the book has been on can’t keep up. We had a few light-hearted, conversation-driven moments in the last issue, but it can’t be full speed ahead all the time.

The art in this issue is handled by Francis Manapul and is very solid. He’s in the top tier of DC artists, but a much different style than Jorge Jimenez. It’s nice to see a different artist’s take on these characters.

Final Thoughts: This is a very “high stakes” story with the creation and destruction of multiverses and all. I hope we get some meaningful, if not lasting effects in the DC Universe by the end of this arc. Another very solid issue.