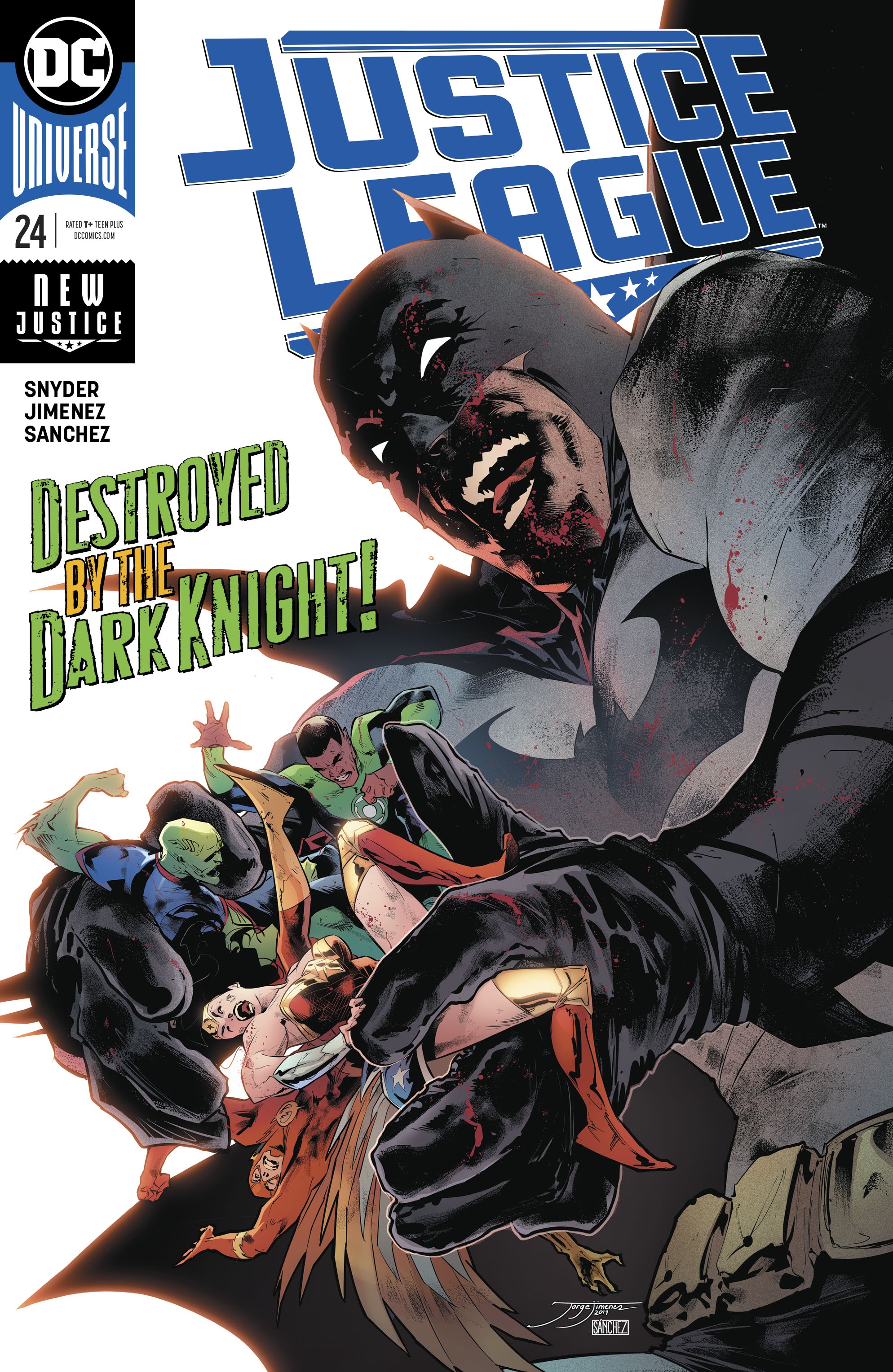 Overview: As the League returns to the sixth dimension’s earth, how does Batman factor into the final confrontation?

Synopsis (spoilers ahead): This issue opens as the last issue did, with a flashback of Clark and Jon. Clark is remembering his perfect day with Jon, building a lantern to honor Clark’s dad. When rain prevents Clark and Jon from lighting the lantern, Clark suffers from what Lois calls “gray kryptonite”. This is being disappointed in little things when he does the right thing, but not getting the results he expects or wants because of things that are outside of Superman’s control. For example, the rain ruining the lantern lighting.

In the sixth dimension, Superman does the right thing, but everyone dies. In his pocket galaxy he keeps fighting and flying, but can feel everything falling apart. He apparently gives up trying to prevent everyone from dying, again.

In future Apokolips, the Justice League and Legion of Doom flee the evil versions of Lois and Jimmy as they try to get to a jump portal to get back to the sixth dimension earth and stop the World Forger. Lois and Jimmy continue to chase them in Krypton Cradles which are used on the most stubborn inmates to put them in a hypersleep for re-education.

Back in space, the Legion of Doom plans to launch the Justice League from the cannon towards the portal before they are overtaken by the Krypton Cradles. Sinestro tells the League that they had a mole on Earth that destroyed the final Batsuit, but they must attack now. They launch the League while John creates a construct to protect them in space. The Legion of Doom turns their ship and rams Lois’ ship to ensure that the League escapes safely thru the portal.

Analysis: As we begin the last few issues of this sixth dimension arc, the breakneck speed continues, if not actually increases.

We get some real insight into Superman, and what makes him so human, even if he’s anything but.  I’ll admit, Superman has never been a favorite character of mine. He’s seemed too perfect, basically indestructible, no flaws or faults.  I always thought of him as boring. I can’t relate to Superman in any way at all, other than the fact that I wear glasses too. This issue has changed my mind a bit though.  We see from the flashback, and then as he continues to fly out of his pocket galaxy, that he feels things falling apart. I chose to believe that he’s learned from his past mistakes and basically gives up, and falls back into space rather than keep fighting, which is completely foreign to him I’m sure. If I’m not right, he’s got some issues to keep doing the same thing over and over and over again and still expecting a different result.  Isn’t that the definition of insanity?

The final Batsuit is interesting on a few levels. The name is somewhat generic I’d say, but the design is amazing. It’s what I think an updated Azrael Batman suit from Knightfall would be like if created now rather than in the nineties. When Batman shows up in the final Batsuit and tells Barry to “imagine a different ending”, which ties in back to Justice League #20 when Lex says to “use your imagination”.

It was nice to see a Lantern construct. I honestly can’t remember the last issue where John used his ring.

There were a few nice touching moments like when John, Diana, and Barry said goodbye to Sinestro, Cheetah, and Grodd.  However, the frenetic pace of this book is the only real negative I find. It’s pedal to the metal, all the time. With the sixth dimension arc ending, going into Year of the Villain, then immediately to Justice Doomwar which is being touted as the “biggest JL event yet”, we could really stand for some downtime and character development.  Event after event lead to staleness, and the events potentially not having very much impact. There’s a lot more to resolve in the next two issues.  Where does Perpetua fit into this, and how do the League get back to earth? Is element X the key to victory?

The art continues to be outstanding.  The final Batsuit is the highlight for me this issue.  It’s big, shiny and bold, and I love it.

Final Thoughts: Another amazing issue, with excellent art.  Justice League is leading the charge in writing and art at DC right now. I continue to look forward to the next issue, wondering what will happen next.