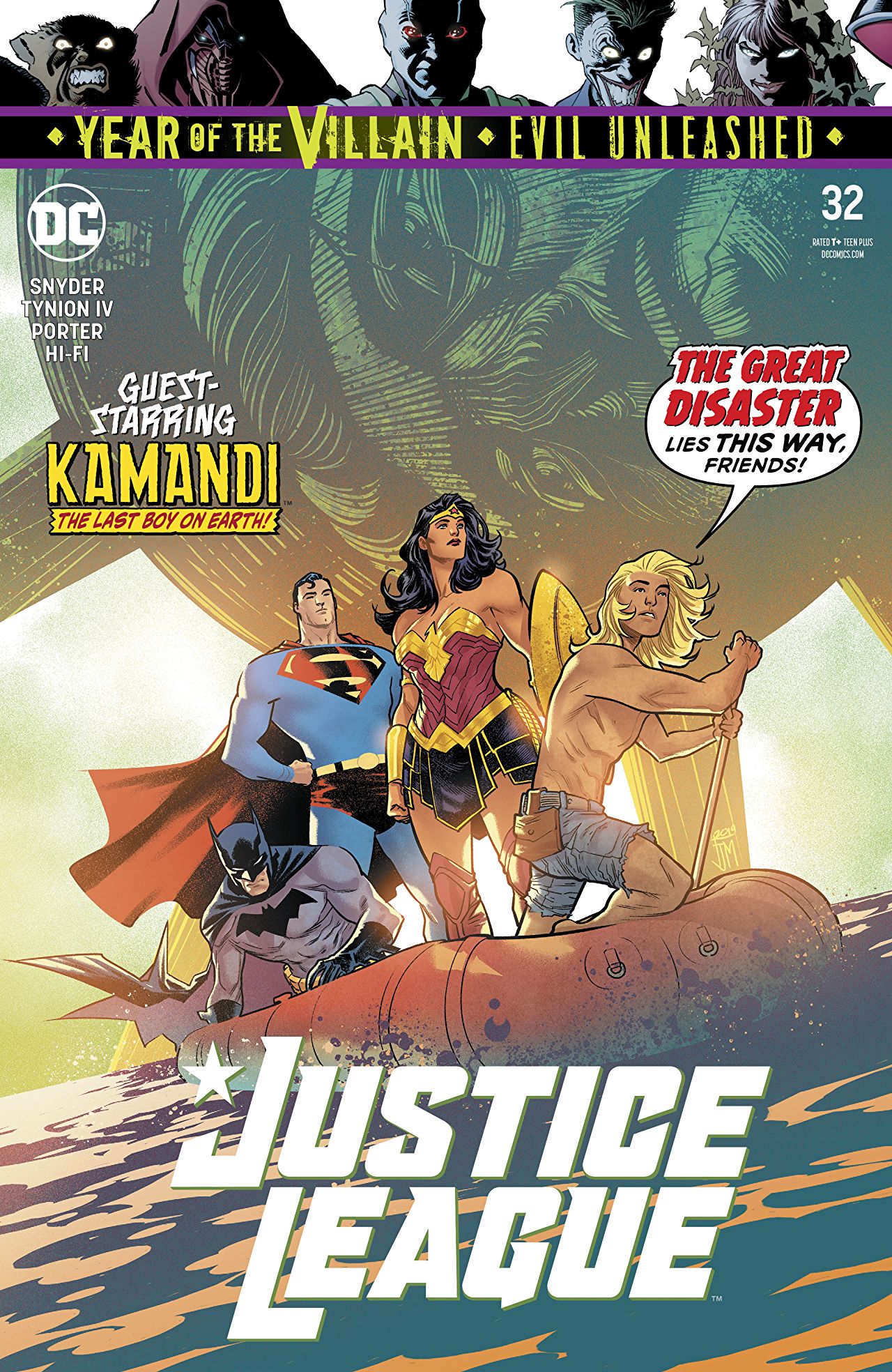 Overview: The battle for the last fragment of the Totality rages on in this action-filled issue.

Synopsis (spoilers ahead): We open this issue as the Thanagarian Fleet is attacking Lex’s ship. With zero success, they retreat but not before sending a message to the Justice League that Lex is unstoppable. Aboard his ship, Lex not only lets the message go through but amplifies it as a reminder to the League of how “futile” their battle is. Lex then gets an update from Sinestro who is in the past and says that the JSA has a Green Lantern!  Grodd tells Lex that they nearly have the location of the Totality fragment. Grodd bemoans the fact that there are too many Flashes. Cheetah and Brainiac question Lex on if Perpetua will honor their agreement or if they’ll even “their” present to return to when the war is over. Lex scolds Brainiacs lack of faith and threatens to reprogram him.

We then get a conversation between Lex and Perpetua as Perpetua feels the spread of doom. Perpetua then proclaims absolute victory with the assistance of Anti-Monitor.

Then the real action sets in as what appears to be the Battle of Pearl Harbor is now being fought in a version of our past. But in the past there are Green Lantern’s and Flash’s everywhere! The American troops seem to have been affected by the “still force” making them basically useless. The JSA is also assisting in the battle. Dr Fate locates the cosmic rod on the carrier “Hail Mary”.  Starman alerts everyone to head to the ship fast.

In the future, as the two Justice Leagues prepare to battle each other, Wonder Woman steps up and uses her lasso to break the mind control of Brainiac over the future’s Justice League. They then fight as one giant team.

Back in the past the Lanterns and Flash’s race toward the fragment as the Legion of Doom does as well.

Analysis: Wow!  This series has been nonstop action for months now. Scott Snyder wasn’t kidding when he said that the Justice League book would be an “event” book. This issue may be my favorite issue since I began reviewing back at issue #20. There’s so much going on. Most comics will have two stories going in the same book with possibly just touching very briefly on a third story. Justice League has three legit stories going on. Battles in the future, in the past, and the Lex/Perpetua deal in the present.

Being a visual medium words can’t really express how good this art is. First, the cover by Francis Manapul is outstanding. It’ll go down as being one of the most iconic Justice League covers ever I think. Having the Statue of Liberty laying on it’s side and Kamandi saying that the “great disaster” lies yet ahead shows what dire straits (music reference) lie ahead. Manapul seems to be doing a lot of covers lately. Not sure if that’s his choice or DC’s, but it’s a great one. Howard Porter is on pencils this issue and it’s just one page after another of greatness. The amount of detail and the amount of characters that he fits on every page is impressive. Justice League has been the standard for comic art even with a double ship schedule for a long time.

As far as the story goes, I couldn’t personally be any happier. I’ve been asking for Aquaman for months and we finally see him in action. Having him and the creatures of the sea become integral in the story was just really fun. And to me, that’s exactly what comics should be. Fabulous art and great writing that are just plain fun!

We get some truly funny moments too.  Grodd saying he wants Jay Garrick’s “stupid hat” for his baby was really funny. He’s got a point too though. How in the world would a metal hat stay on your head when you’re the fastest man alive, or one of the fastest men alive? Now’s an appropriate time to say “that’s comics”.

Yet another great part of the issue is Wonder Woman stepping up and possibly taking over as the leader of the JL. Snyder and Tynion nailed the character and what she stands for perfectly. To see her front and center on a full-page spread was great!

Final Thoughts: Snyder, Tynion, Porter, and Manapul give us darn near a perfect comic book. Great writing, with jam packed action and fantastic art, plus resolution to a lot of questions!