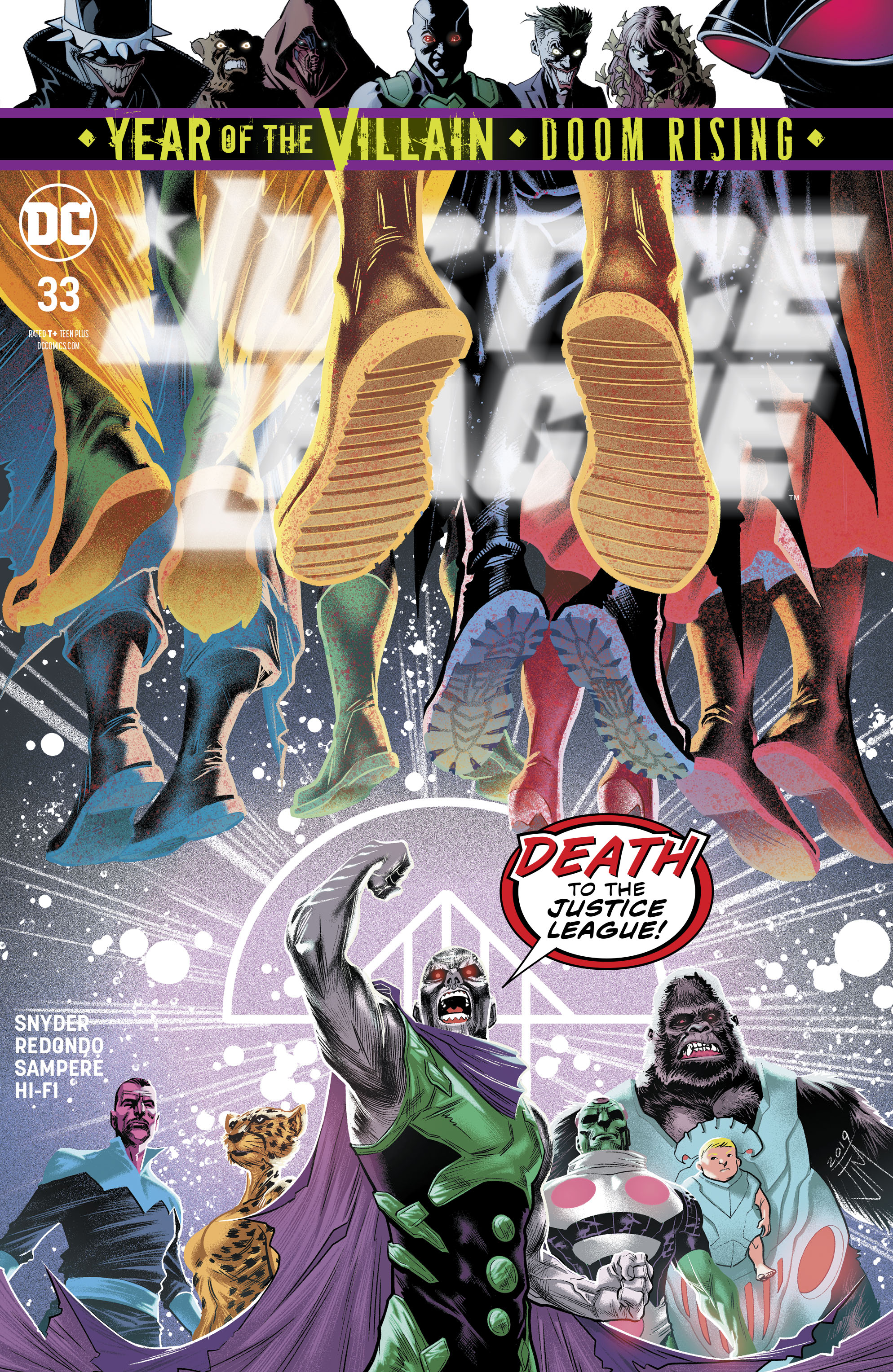 Overview: As the battle for the Totality fragment intensifies, even more heroes show up, and we get pages of cliffhangers.

Synopsis (spoilers ahead): Our issue opens with Shayne alone on a ship in the Promethean Galaxy pleading to J’onn to give him a sign if he’s alive, and that they need him, but also that Kendra needs him the most.

We then switch scenes to Kendra, Monitor, Anti-Monitor, World Forger, and Starman as they begin their attack against Lex and Perpetua. The brothers join arms in preparation to attack, but Perpetua says they lack the power of the Totality to shape domains. Starman, however, does have the power and he rises above and powers the brothers as he prepares to communicate with the Justice League through Hypertime. He instructs Kendra to activate her wings when the portal opens, but not before. With the brothers interlocked with Starman’s power flowing through them, they feel more powerful than ever before and they become the Ultra-Monitor!

In disgust Perpetua orders Lex from the safety of their shield to kill the Ultra-Monitor. As he does, an enraged Kendra is ready for revenge!

In the past the Green Lanterns lead the JSA, the Flash and Aquaman toward Atlantis in a construct of a World War II-era submarine. There’s some joking about finding a girlfriend in Atlantis, but also Aquaman tells the group what he’s been up to since “Drowned Earth”. Basically that the Anti-Monitor saved him and asked for his help, but got a bit sidetracked along the way and that the Justice League had already began their mission by the time he regained his memories. While they are leading the submarine John seems a bit rejected about people choosing the side of doom. Alan gives him a nice pep talk about fighting the good fight, even if you don’t win all the time.

In the future as the Batman, Superman, Wonder Woman and the future Justice League team are being decimated by Brainiac One Million, Kamandi tries to think of a plan. Wonder Woman told him to get help but there is no one to help. He sprints off as he gets an idea.

Meanwhile, the Ultra-Monitor battles a Perpetua who isn’t at full strength yet, and Kendra and Lex trade insults. As Kendra shouts out that she’ll kill Lex, she activates her wings, but she did so too soon. The Justice League however needed her to do this after they retrieved the last Totality fragment, so she could fuel the Ultra-Monitor. Kendra’s rage takes over as Shayne pleads with her to listen to Starman. She has had enough and hits Lex square in the head with her mace.

In the past our group finally reaches Atlantis, but surrender as the Legion of Doom is already there. Aquaman asks to be brought to the king.

In the future, Wonder Woman tells Brainiac One Million that they don’t have the Totality fragment, and he calmly tells them that “death it is”!

In Atlantis, Aquaman just wants to speak to the king, Poseidon, but as the walls start crumbling away, Poseidon is already in chains being held captive by the Legion of Doom!  Poseidon has relinquished his crown to none other than Vandal Savage and the Legionaries Club.

Not to be forgotten, Kamandi finally comes to the realization that although he is the future’s last person on earth, that it isn’t up to him and him alone to fight. He realizes that the help Wonder Woman meant was in the form of even more justice!  And this justice is in the form of yet another group from the future, led by Batman Beyond!!

Analysis: Snyder, Tynion, and company continue to lead us on quite the “event” comic.  Each issue throws more at us, and I’m totally fine with that. Our characters have enhanced powers, and thus deserve enhanced names right?  Throw in some 90’s era huge weaponry and we’ve got quite the comic!!

Again, we get some really good character moments and in this issue, it’s from the two Green Lanterns.  This makes me long for a Green Lantern Corps book! Come on DC!!

Bruno Redondo and Daniel Sampere do an outstanding job on pencils!  The amount of detail and sheer number of characters they fit in this issue is unreal.

To make this an event unto itself we have not one, or two, but three cliffhanger pages!! It’s almost like the team couldn’t decide where to stop.

Final Thoughts: Snyder and Tynion continue to push the boundaries of a non-event title, even if they’ve given it event status.  The amount of action and amount of character is this book certainly is impressive. Throw in some good character moments, some humor, and advancement to the story and you’ve got a great issue!