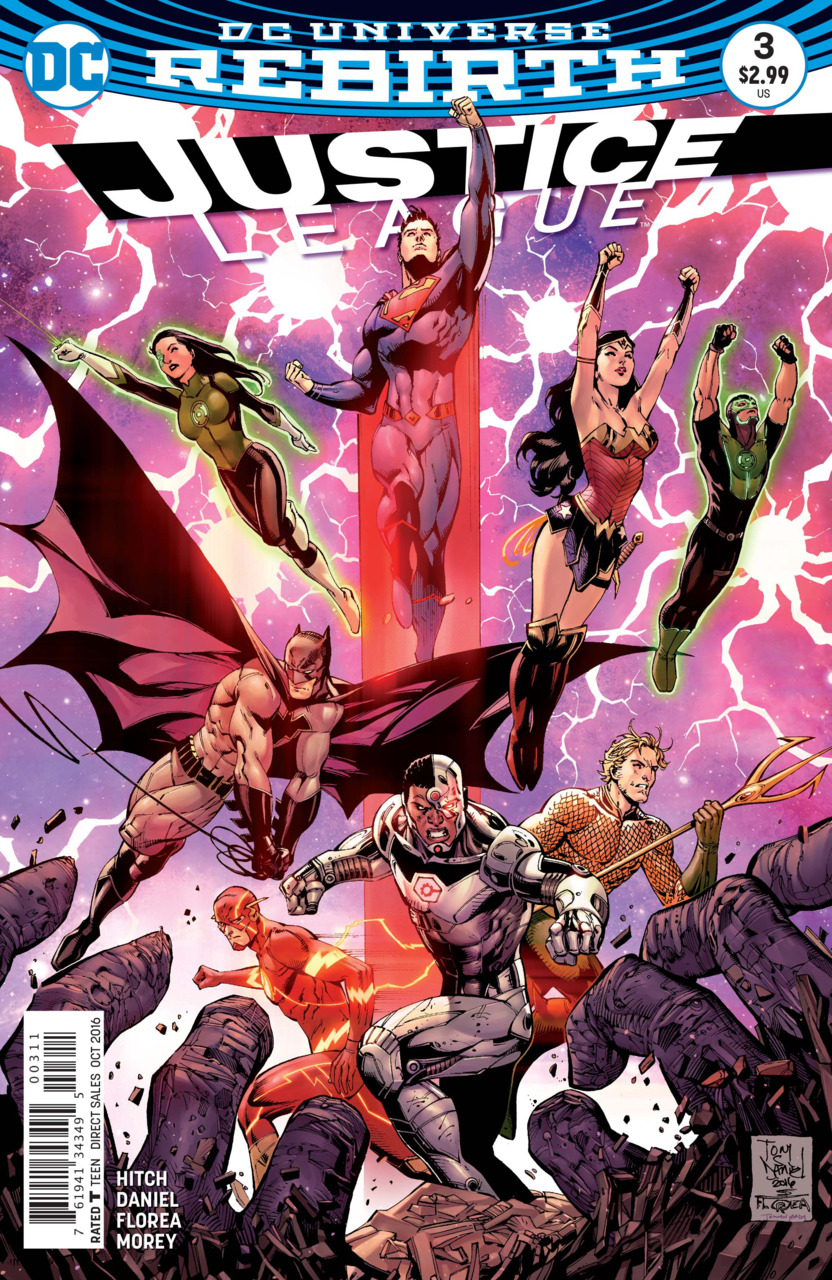 The issue opens with Wonder Woman’s voice over recapping the events of the last few issues: earthquakes leads to possessed people leads to people fusing together into giant creatures who call themselves the Kindred. Wonder Woman attacks one of these creatures and gets pulled inside the giant’s body.

The Justice League fights these creatures around the world while Batman speaks with Superman and Lois at the Kent farm to convince Superman to help them by going to the Earth’s core to destroy the machines causing the earthquakes. Meanwhile, the Green Lanterns travel into space and find that the source of missiles being fired at earth is a decaying planet on the other side of a worm hole.

Back on the farm Lois speaks to Superman about how she doesn’t want Superman to go because it’s too dangerous, but knows that he has to.  Superman boom tubes to the Earths core but is quickly overwhelmed.  A missile hits the Kent farm and Cyborg gets overcome by the creatures who fly out of the missile while Batman gets Superman’s family away from the danger. The issue ends with four giants meeting and summoning some sort of energy around them. Superman finds a machine underground but does not know how to destroy it.

The art remains to be the standout in this story. This title has been all about big action and Daniel continues to prove he’s able to deliver on the action the story calls for.

The story continues to be problematic, however. From his previous work, Hitch has a clear eye for the big action scenes, whether he is writing or drawing them.  The beats between those action scenes is where he falls down.  The villain of this story continues to speak in cryptic terms about stolen power.  We still have no idea what exactly they want or why and there’s really nothing compelling about “the Kindred”, who seem to just want to come down and break things.  The idea of the world’s people fusing into giants is an interesting one but it gets muddled by the missiles and earthquake machines.  Much like with Hitch’s JLA arc, there’s too many things going on at once that don’t seem to mesh well together and splits up the team to the point where no one is really interacting with anyone else.  I think the story would be stronger if the whole team was together against the single threat of the giants.

The characterization of Lois is problematic for me, mostly for personal reasons.  I’ve been in law enforcement for ten years.  For the last five years I’ve been with an amazing (and very patient) woman who I’ve kissed goodbye countless times to start my shift knowing I might have to do something that might mean I don’t come back home.  The conversation between Superman and Lois rings very false to me. I like the idea of Superman being married and the notion that Lois is his rock, the thing that gives him strength and support so he can go and be a hero.  Lois Lane should always be shown as just as much of a hero as Superman (she should also be a journalist but that’s another conversation).

In this story Superman seems to be acting despite the wishes of his wife.  This isn’t the new 52 Lois. This is the Lois Lane that has been married to Superman for years.   I don’t have a problem with her being worried for her husband, but let’s remember. She’s married to Superman. Superman risking his life isn’t a special event, it’s just another day of the week.  Given the history that these characters are supposed to have been through, the conversation seems out of place, as if it’s the first time her husband has ever had to risk his life.  I appreciate Hitch trying for a quiet character moment, but Lois should never come across as weak or selfish in moments like this and the conversation would have been benefited from being less about “never mind the fact that the world is ending and you can stop it, I don’t want you to go” and more about “go save the world and come back home safe”.

This story continues to underwhelm. The action is great, but that’s all this title seems to be good for.  At this point I’m just hoping that this story line wraps up soon, along with it’s writer.