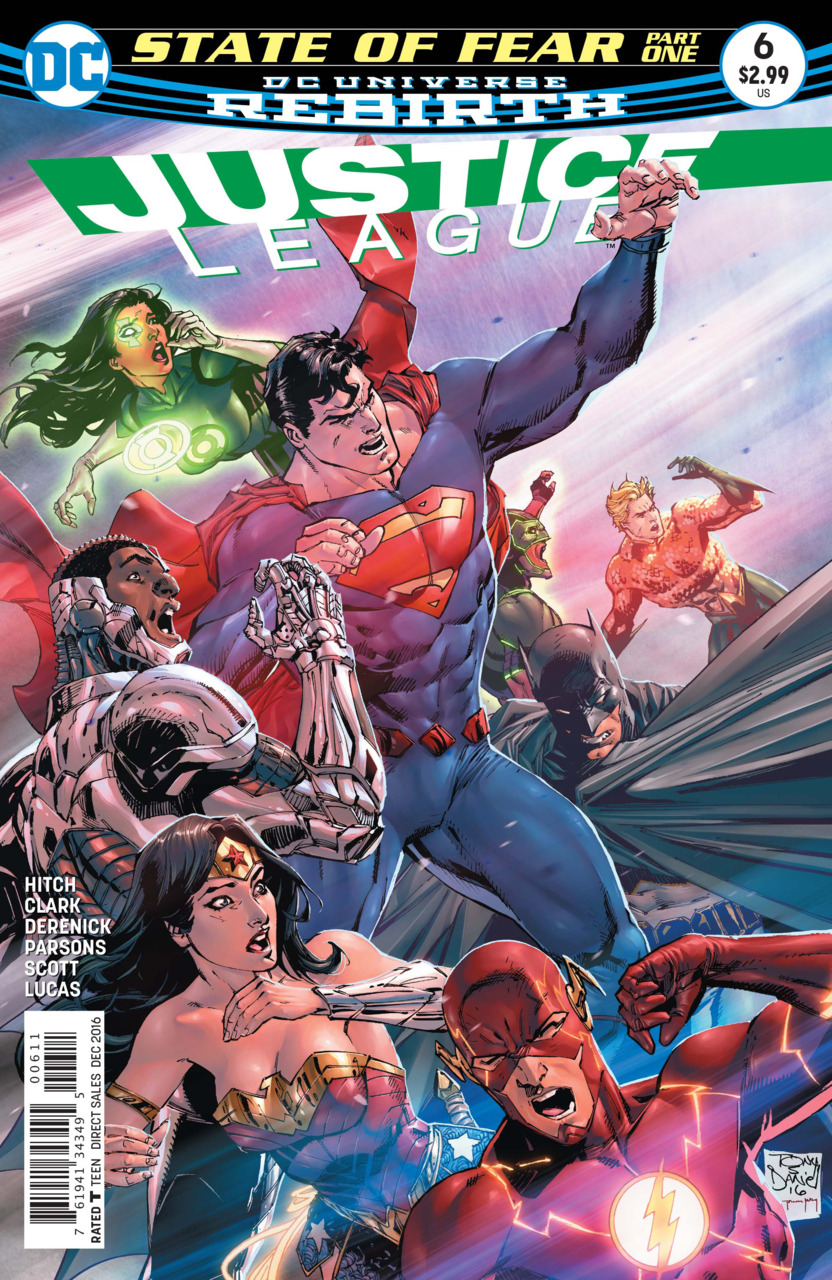 State of Fear Part 1” opens with the Justice League terrified and running away. The civilians in the area are also running panicked. We see tubes coming from the sky and it appears that there are voices calling to spread fear to taste and life to eat. One of the tubes finds Flash and Jessica gets a handle on her fear by remembering her fearful past. She flies in and forms a construct bubble around her and Flash to protect him from the tubes. She realizes that she does not have enough power so she calls Simon Baz in for backup. Baz is also able to get control of his fear and provides the backup Jessica needs. The power of the two lanterns is holding the attack at bay but is not repelling the attack. The entire League steps in and forms a chain holding both of the lanterns. With the combined will of the Justice League, the lanterns are able to defeat the threat.

In the aftermath, we learn that there were no fatalities, only limited injuries and property damage. The League’s attention turns to the actions of the two Green Lanterns. Flash swoons over Jessica’s actions. Batman asks Superman if they can talk. Superman puts it off as he has to get back for a family dinner. Cyborg activates the boom tubes home. Batman returns to Gotham and Wonder Woman and Aquaman go off with Arthur asking Diana for her help with something. Jessica and Barry hold off and eventually the two end up agreeing to a dinner date. Jessica wonders of they should include Simon and Vic but Vic just says that the two of them have their own plans. Jessica and Barry agree to meet at Ristorante Doris in Seattle. Vic and Simon agree to head off to see Vic’s old High School football team.

At the Kent farm, a famished Superman and Lois talk over the day’s events. She saw the battle on the news and asks if Clark is okay. He just says that he has a headache. They do not know what the thing was that they were fighting just that it make them all afraid. Tomorrow will bring something new, it always does. Clark does talk about Batman a little. He should have told Batman how he felt but he knows that Batman still does not trust him. Lois tells Clark to let it go.

In Seattle, Jessica prepares for her date with Barry. She starts to have cold feet and muses that maybe she should cancel but she does not have Barry’s number. She talks herself into going through with dinner after all they are friends and nothing is going to happen. She does decide to floss her teeth again.

In Central City, Flash heads home after a night of crime fighting. He changes his clothes a couple of times because he does not want to come off too strong with Jessica so he decides to go more casual. Barry sees Jessica flying to the restaurant and then decides he needs to get flowers so he speeds off causing Jessica to think that he is cancelling but as she lands Barry is back. Barry admits that he went to get flowers but when he produces them, the petals are all falling off so they decide to go in to the restaurant.

In the Batcave, Batman tries to call Dick Grayson but he is unavailable. Alfred comes in with some tea and tells Bruce that he spoke with Dick a few days ago and he seemed to be in excellent spirits. Bruce admits that he has not spoken with Dick but asks Alfred to leave saying that he wants to be alone.

In Ristorante Doris, Barry and Jessica start to have small talk before ordering. Barry comments on Jessica’s appearance and she quips that she thinks green is her color as she is wearing a green top. The waiter come to the table and Jessica orders her meal but Barry starts to order everything on the menu. Jessica comments on Barry’s order and he just says that he usually eats more, he did not want to look greedy in front of her. Barry immediately starts to complain about the wait claiming that the times he has to slow down, he is not out saving people like his mother. Jessica starts to get scared and suggests that she should go. Barry reaches out and touches Jessica’s hand, she pushes away spilling the drinks on the table screaming for Barry to get off of her. The waiter comes running in and Jessica uses her ring to blast the waiter away out of fear of being touched again. She starts to panic at what she did and Barry with a smirk on his face just says that the waiter deserved what she gave him because of the way he looked at them, but she should calm down. She runs off into the kitchen leaving Barry to berate the other patrons who are staring at them. Jessica runs into a cold room and Barry phases through the door. Jessica blasts Barry through the wall leaving a battered Barry Allen dazed in the street.

At the Kent farm Clark and Lois are sitting at the table. Clark is not eating even though he was starving earlier in the evening. Clark says that he is not hungry but he does have a headache. Lois mentions Batman and this drives Clark angry. Clark says that Batman does not trust him and now he is poisoning Lois’s mind against him. Lois retorts that Clark is too desperate for Batman’s approval, so desperate that he will do anything when Batman snaps his fingers. Clark stands up saying that he has to see Batman, he cannot screw with the Kents lives anymore. Lois mocks him asking him if he really wants a pat on the back or to have Batman call him an inspiration. Clark just says that he is going to kill Batman. Next issue, Batman vs. Superman!

This begins the next story arc of the Justice League. This is basically a set up issue, but I did find it enjoyable. I particularly liked that Jessica Cruz and not Simon Baz was the first to snap out of her fear in the beginning of the issue. She was able to take charge and I like that Barry was impressed with her.

I liked the character beats we got to see in this issue. Particularly the budding relationship between Barry and Jessica. Unfortunately the dates had to go sour in order to move the plot along but it was good to see these characters in their civilian lives and not just their heroic lives.

I am interested to see where the Superman/Batman rivalry will go and what is it that Aquaman wanted Diana’s help with. This is still proving to be a strong title.