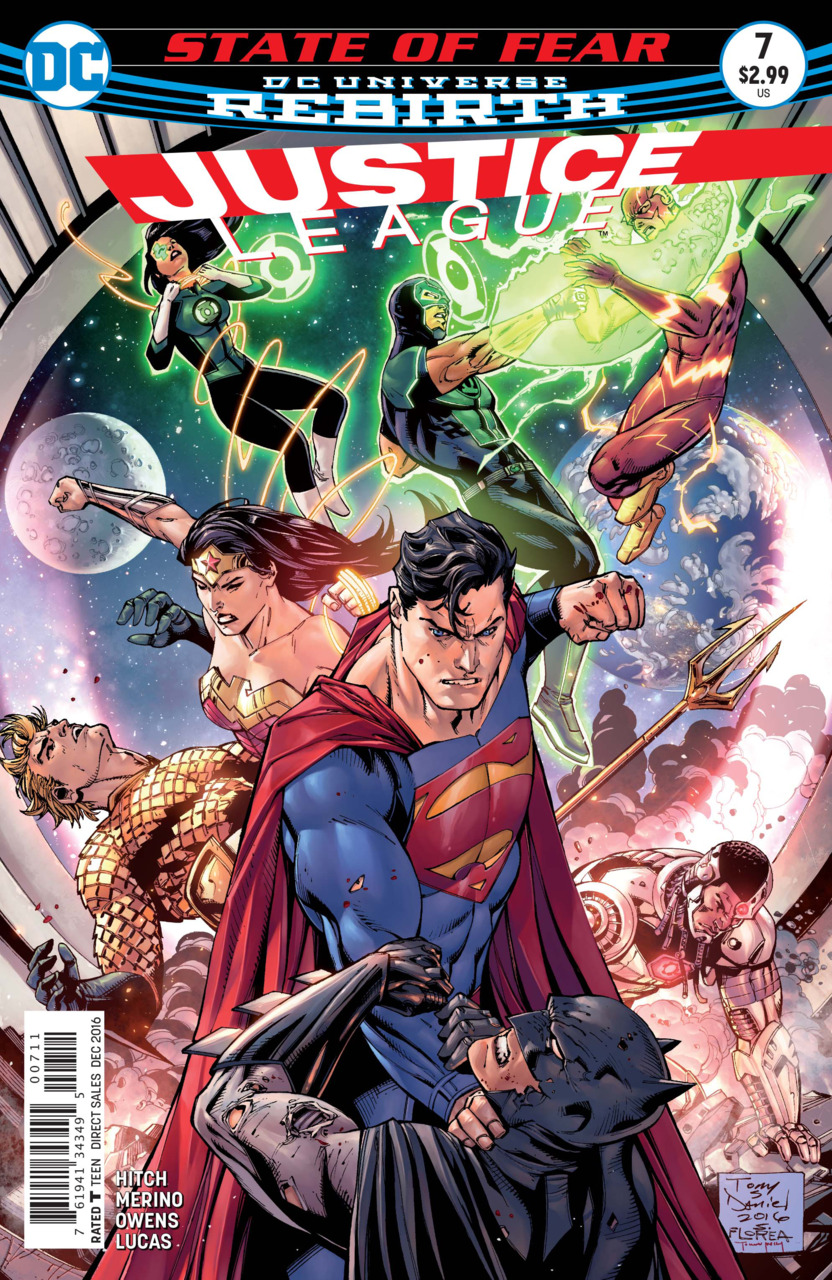 The Justice League had been affected by an entity that is amplifying their worst fears.  Batman seems wracked with survivors guilt over still being alive with all the death around him. Superman goes after Batman in a rage for not trusting him despite the sacrifices he makes. Cyborg is overcome by his fears of being deformed or freakish, Simon Baaz sulks on some bleachers. Aquaman and Wonder Woman talk about being angry and afraid of the war-like nature of man and decide to toss out a pile of nuclear attack subs on the shores of the US as a warning.  Jessica Cruz and the Flash, fresh from their interrupted date, deal with this fear entity after Jessica vomits it out in a black cloud and with some coaching from The Flash, Jessica manages to vanquish the entity with a blast from her ring. The issue ends with Jessica making the decision to leave, saying that she isn’t ready to be in the League.

Even under the influence of an outside force, the characterizations of a lot of the League is a problem for me.  Wonder Woman and Aquaman play the same note about not trusting mankind. I don’t buy Superman’s deepest fear being that the other kids in school don’t like him yet, especially now that he has a family to worry about. And if you look at Batman’s history with the Scarecrow (an established villain that Hitch once again refuses to use for no apparent reason) I have problems with Batman being so overcome with guilt that he wants to be put out of his misery.  That’s just not Batman. The whole Batman vs Superman part of the story is engineered to have them ALMOST have a conversation and resolve things, which I wonder if is something they are dragging out to resolve itself in Trinity. (Also of you want to see a quiet character story done right, go read Trinity, it’s awesome).  It’s weird that they realize they are being effected by something but there’s no time actually spent to talk about the things that were brought up in the issue.

Hitch also doesn’t seem to know what to do with the Green Lanterns.   He sidelines Simon for the issue to sulk on some bleachers.  If the fight is against fear, why wouldn’t Simon have been more involved in the story? And then Hitch sets up a romance between The Flash and Jessica that doesn’t go anywhere and then has Jessica leave the team.  Hitch has yet to have either Green Lantern do anything interesting and Jessica has continued to be played off as unconfident and fearful. I feel like Hitch was saddled with new characters he didn’t have a feel for and this story seems designed to remove a character he doesn’t want to have to deal with anymore.

This is a book that continues to fall down in the writing.  Hitch has had a good year with most of these characters and it appears that he’s just not up to the task.