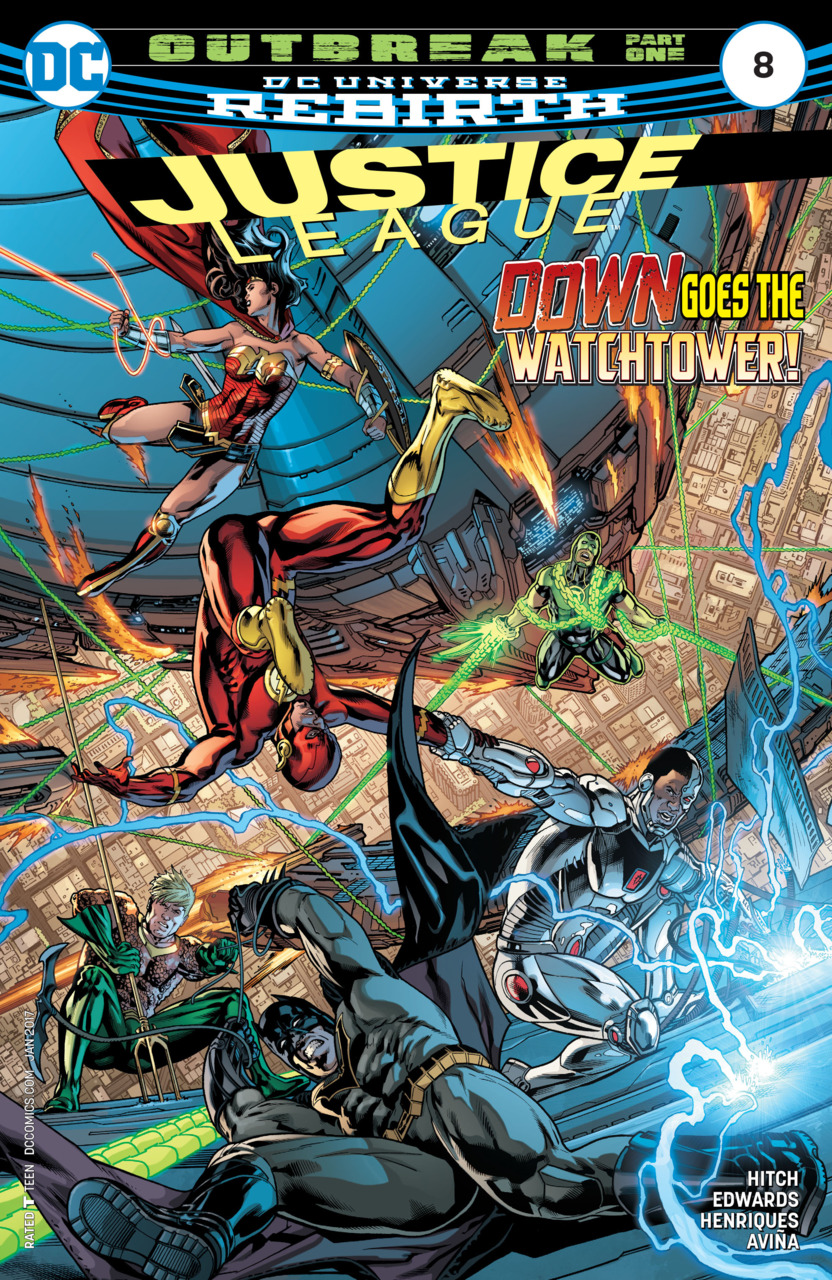 Justice League #8 picks up in the aftermath of the Kindred attack.  Cyborg is in the Watchtower watching the funeral of Diane Palmer, the lone fatality from the Kindred attack when he begins seeing strange code in the broadcast.  The code invades Cyborg’s circuits and then the Watchtower begins to plummet from orbit.  Meanwhile Batman is repairing the damage Superman did to the cave last issue when something takes control of all the Batmobiles and other vehicles in the cave and they all start opening fire on Batman and Alfred.  Batman draws the fire from the vehicles while riding on the bike last used in Zero Year while Alfred downloads a program to the Batmobile that purges the signal to control it.  Meanwhile Cyborg stops the falling Watchtower from making a crater out of San Francisco by boom tubing it back into space while he falls to the street.  The invading program takes control of Cyborg’s systems and forces him to bring Wonder Woman, the Flash, Aquaman, and Green Lantern (Simon Baz) to him with a false distress code. The issue ends with the same code taking control of Green Lantern’s ring.

After some significant stumbling in the series up till now, Hitch appears to have found some footing.  This issue is pretty strong. Cyborg and Batman both speak about how even one life lost is a failure on their part which feels in line with their characters. I will say that I find it hard to believe that despite all the destruction, that only one person in the entire world died in the attack. Given that they make it a point in the story to mention that the victim’s husband is absent they are probably going somewhere with this but there was probably no need to make her the only victim of the attacks.  The action sequences are tightly written and the story moves along quickly.

Batman and Alfred have a lot of nice moments in this issue. The dialogue between the two is as it should be. I also enjoyed the nod to Zero Year. I wonder if there is a mandate with Rebirth to make sure there are references to New 52 continuity. Speaking of which, given the beating that Alfred has endured in the New 52, it’s nice to see Alfred as Batman’s aid and friend. Alfred has been portrayed elsewhere recently as panicky and weak and an obstacle for Batman to overcome.  It’s nice that someone has remembered that this man is the man that raised Batman and it only makes sense that he is capable in a crisis. Also, Four words: Alfred with a bazooka! The rest of the league doesn’t really get much time but that’s more the fault of the page count then anything else.

The art in the issue is decent if a little unremarkable which is par for the course for this series.  I’m not suggesting that Jim Lee has to return to the title but given how heavily this series relies on big action sequences it would be nice for DC to put someone with more of a flare for those moments on the title.   The Watchtower falling from the sky should be an epic moment and comes across as a smaller moment then it should be. Also on a related note, can DC please go back to the old utility belt design? In the hands of most artists the design simply doesn’t work and feels jarring and out of place.

All told, this issue is a step in the right direction.  I’m curious to see if this is a sign of the title improving and it’ll be interesting to see how the story continues.