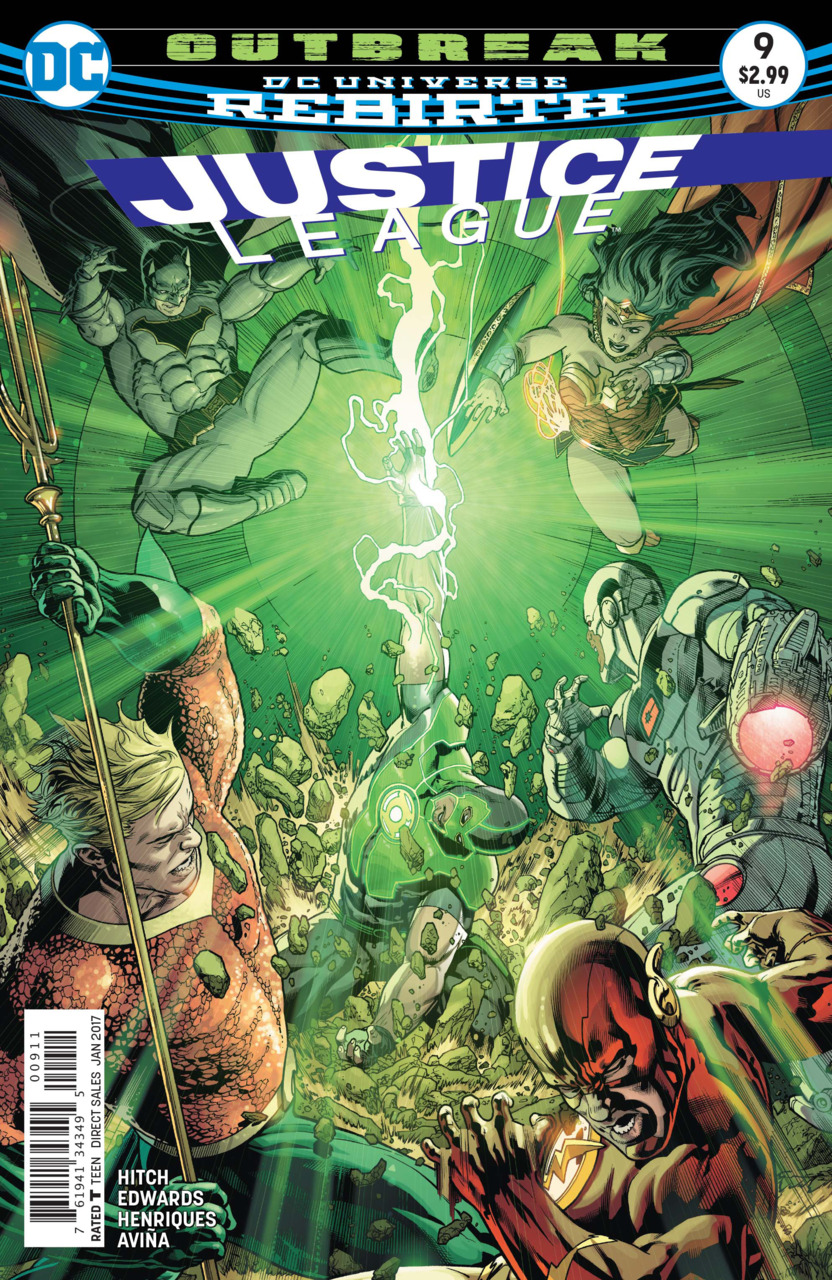 The Justice League is being attacked by a computer virus which has taken control of Cyborg and Green Lantern’s ring.  Meanwhile Batman and Alfred examine the computer virus to determine its source.   The League manages to overcome the virus by Cyborg electrocuting himself and the Justice League triggering the Green Lantern ring to revert to “factory settings” and Batman traces the source of the computer virus to James Palmer, the husband of the lone victim of the Kindred attack.  The issue ends with Batman and the rest of the League ringing the Palmer family door bell, and asking Palmer’s daughter if her father is at home.

Remember in the late 90’s when the internet and “hackers” was a new thing in pop culture and the answer for everything in movies and TV was a “computer virus” without any understanding of what any of those things was or could actually do. (If you’re too young to remember this, go watch “Independence Day”, you’ll see what I mean).  This story seems to suffer from the same problem.   In a story with cyborgs and immortal goddesses, I’m not looking for reality, don’t get me wrong, but I take issue with the answer for something that can take control of the Watchtower, the Batcave, Cyborg, and the Green Lantern’s ring being a computer hacker with a grudge.  Even in a fantastical story, plot devices have to follow the rules that that world sets up.  Simply saying the word “computer virus” isn’t enough to explain how this particular threat came to be.  Green Lantern’s alien will-powered ring being subject to a computer attack to me just doesn’t make sense. Unless of course the next issue reveals the Palmer got his computer from an Apple Store in a mall on Apokolips, then I suppose it’s fine.

The story suffers from the same problem that has plagued the entirety of Hitch’s run on Justice League, the mediocrity of the villain.  Hitch seems hellbent on creating new villains and it doesn’t appear that he has much of a talent for it and largely his creations have one thing in common, they are boring.  The whole point of Rebirth has been to embrace the rich history and legacy of the DC Universe.   Justice League seems to flaunt that whole approach with colorless, uninteresting villains.  I’m not suggesting that there is no room for new characters to be introduced, but in the case of this book. It’s simply not working. More to the point, these characters work best when they are up against a threat with which they have some sort of history.  I for one find my self constantly missing villains like the Injustice Gang as I continue with Hitch’s run.  Instead of a hacker, the same story could have been done with the Calculator, or with some tweaks a character like Braniac.

The character work and dialogue in this issue is fine.  As with last issue I appreciate Batman and Alfred getting some time to shine.  The art remains passable if nothing remarkable. Neil Edwards handles the big action hero moments well and the Green Lantern constructs are well realized.  I find some of his figures to be drawn very awkwardly thorough, and aren’t particularly dynamic.

What his issue comes down to is that it’s mediocre and not terribly interesting and frankly, a title like Justice League deserves better.