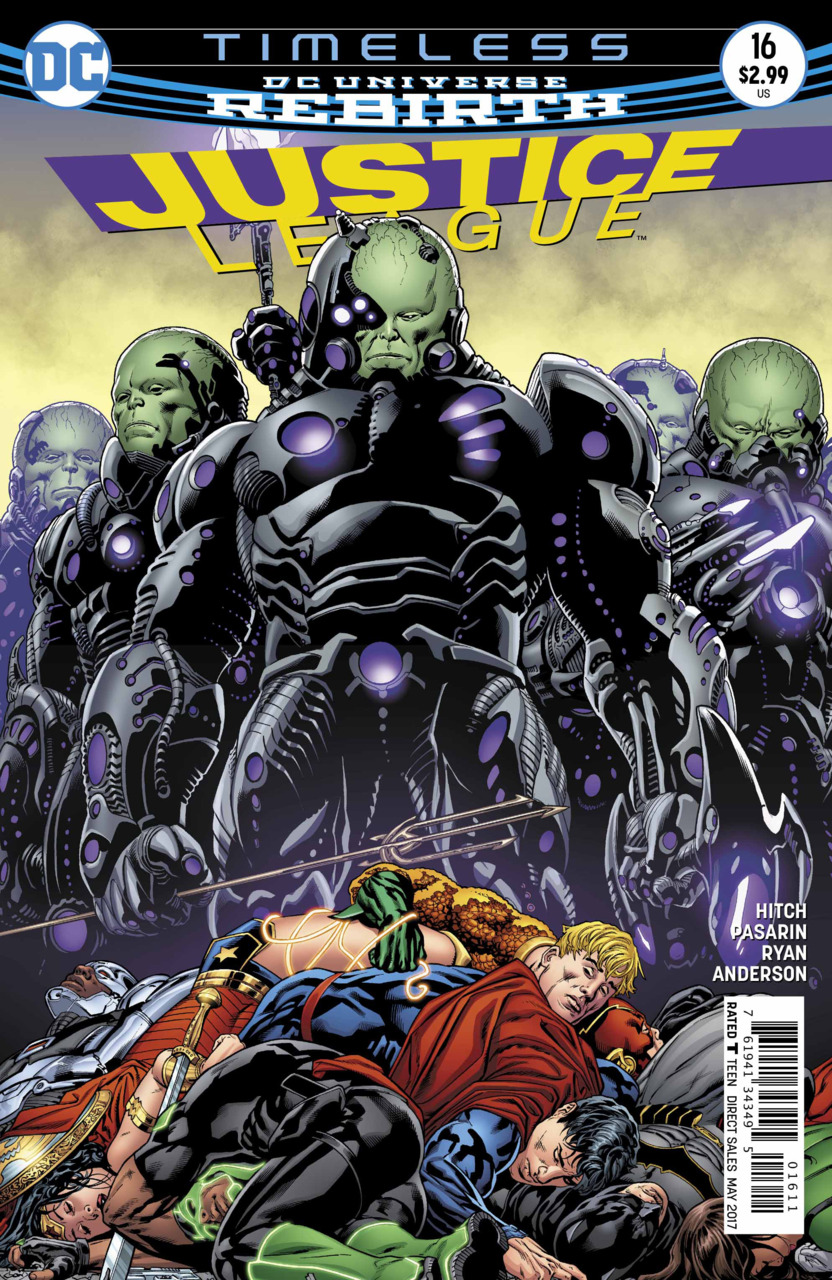 The Justice League battles the forces of The Timeless across time and space to save the universe from an unknown but perilous fate in Justice League #16.

Several members of the Justice League are scattered throughout time, during important events that the Timeless wish to change to eliminate the super-powered. The JL members are each trying to fend off the Timeless attack in the separate eras.

Batman heads over to Infinity Corporation to get an update from Vincent, Alexis, and Jane. They tell Batman that there is a distortion wave coming which will have an unknown effect when it passes through, though it will likely alter reality. Vincent says that the ‘Stones’ told him that this is a fixable problem for Superman. Superman is upset over Lois and Jon’s trip across the distortion wave, they are unreachable on the other side.

Batman leaves the Infinity Corp trio to find Superman. The three discuss if they should tell the Justice League everything and decide not to.

Aquaman is in Atlantis 47,000 years ago and has come just in time for the Queen to give birth to twins. Since Arthur isn’t able to be consumed by the fires and is able to hear the song of the Zodiac Crystals the Atlantean royals decide that he must also be from the royal family.

Batman has found Superman and are with the Infinity Corporation threesome. Superman is upset that Lois and Jon have disappeared into the wall of light and wants some answers. The three say that they received a message from the stones from across five different time periods each directed to a different member of the Justice League. The message originated in Earth’s present. The message was from Molly, the Keeper, saying that they will be looking for machines that are just slightly out of phase with the universe in different time periods. She has given the JL members bracelets that should render the machines visible.

The time periods are: Atlantis during a time of magic, Greece just as Zeus was about to confront Cronus, the day that Barry Allen became the Flash, the future time when the Power Plagues were spreading, and the 30th Century when other beings came to Earth. The Timeless are trying to stop key events during these periods. The goal is to stop the Timeless from doing their dirty work.

A large Timeless spacecraft hovers over the JL members in the different time periods and shoot electrical beams to the earth below. Batman, Superman, and the Infinity Corp gang await the distortion wave which is nearing. They decide to look for a control center in the incoming ship. Superman flies up to the ship and finds an army of Timeless soldiers. A voice comes from the ship saying “I am everywhere” and has apparently expected Supes. The source of the voice presents itself, it is a gigantic naked humanoid held floating in the air by many cranes. The voice says that he and Superman will now save history. Until next time…

Writer Bryan Hitch surely has something up his sleeve in this story across time and space. It isn’t clear what The Timeless’ motives are, and the Justice League’s allies at Infinity Corporation are clearly not being truthful with the League. There are mysteries to be solved and twists and turns to be navigated yet. The tale is engrossing, though also sometimes confusing. The distributed nature of the story makes for many time and location shifts which gets a little tiresome. However, since this disparate action is an inherent part of this plot this seems to be the only way to tell this story.

The art by Fernando Pasarin, Matt Ryan and Brad Anderson gets the job done. There are some panels where the combination of the lines and colors are strong. There is one small panel of Batman speaking with Vincent where Batman has a salmon-y shade on one side of his face which is an attractive effect. There is also a powerful, but almost misshapen, large panel of Superman demanding the Infinity Corp folks to tell him what they know. He looks strong if a little unhinged. However, these terrific panels are few and far between. Most of the book is merely workmanlike but by no means bad.

I typically don’t read Justice League so I was more confused by some of the plot elements than regular readers would be. I can see that the story is interesting, though the big team ups of the JL are not my cup of tea. However, if you are a Justice League fan I think you will probably enjoy this issue and story arc. Even I will probably check in to see how Molly and the Timeless make out.