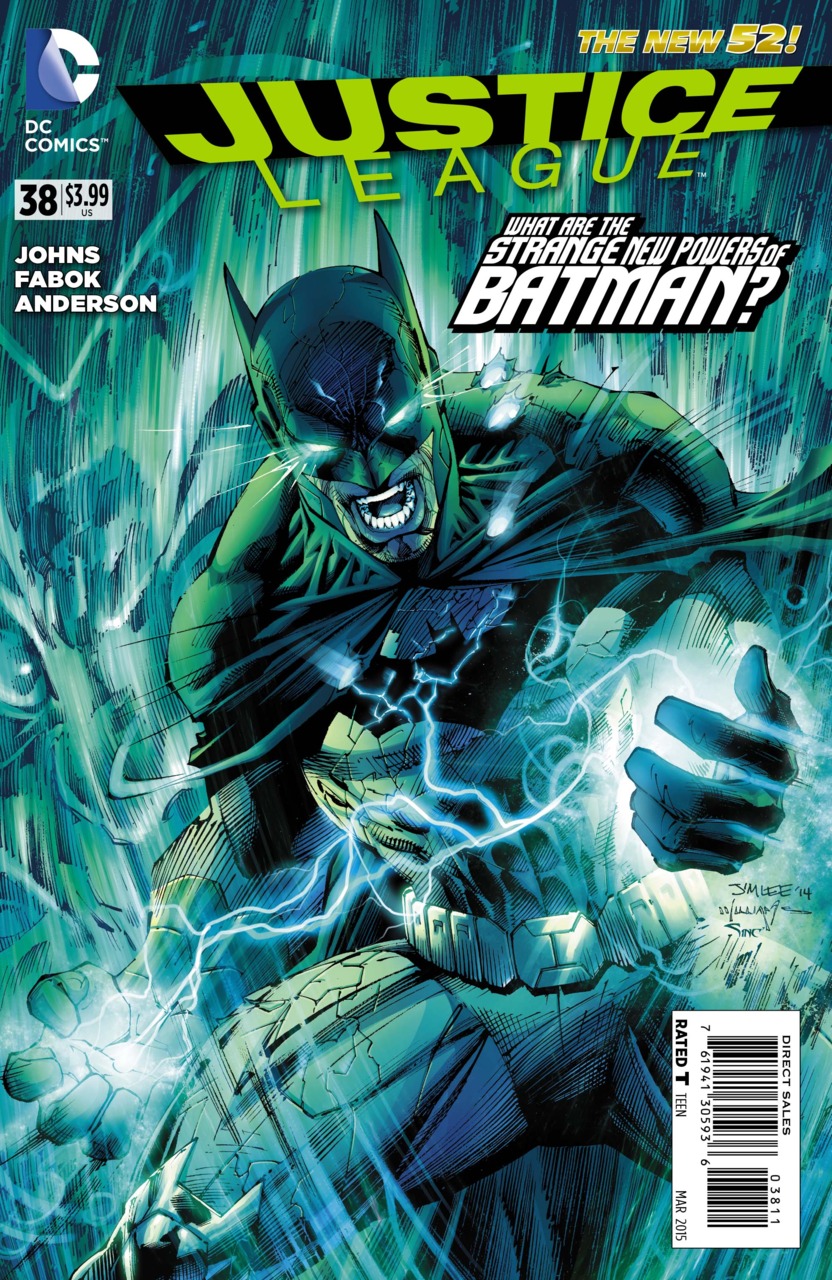 Our issue opens with a ringing phone inside the Oval Office in the White House. However the scene quickly cuts to a secured bunker where the President is speaking to Colonel Steve Trevor regarding the situation in Metropolis and the Amazo Virus. They discuss how Superman, Batman and Wonder Woman are the only remaining members of the League that have not been infected and that they are currently searching for Patient Zero as Lex Luthor believes he can synthesize an antidote with Zero’s blood. This is all underscored with images of the Trinity continuing to fight against Zero and we also get a reminder that Batman’s hazbat suit has been ruptured and he has been infected. Trevor’s voiceover also reminds the readers that exposure will result in initial flu like systems, with a metahuman ability soon manifesting afterwards, and then eventual death.

As the recap ends, Batman suddenly jumps into the fray and unleashes a sonic pulse that sends Zero crashing through several damaged cars. Superman rushes to Batman’s side as Wonder Woman collects the unconscious Zero. Batman explains that he has gone blind due to his ability and developed a sixth sense, somewhat resembling a bat’s echolocation. It seems that the metahuman ability is not randomized like previously thought, but possibly psychologically based. Batman suddenly passes out as he mumbles something about hearing a voice.

We then cut back to the base camp outside Metropolis where we see that Lex Luthor is not dead from the last issue. Captain Cold had quickly erected an ice shield around Luthor to protect him and he quickly attacks Bullet and freezes him solid. We then cut to Luthor as he is busy trying to revive Neutron (the guy responsible for attacking Luthor and accidentally releasing the virus), Luthor explains that he needs to get him awake in order to find out who wants him dead…as this is the second time a metahuman assassin has come after him. However this is quickly broken up by the arrival of Superman and Wonder Woman carrying the unconscious Zero and Batman.

Luthor begins to get to work, when we discover that the base camp has become surrounded by infected people. As Luthor holds a vial, the liquid inside quickly changes black and he shouts “NO.” Luthor explains that Zero’s blood won’t be able to help them, he is just as infected as the rest…his powers just manifested different than everyone else. With a prompt at what to do next, Luthor reveals that he needs Superman’s blood to create a cure…as he had infected the Kryptonian several years earlier and he had not gotten sick. He explains that he had created the Amazo Virus to leave Superman powerless, and he had developed it in order to prepare for a possible incursion of Kryptonians should the Phantom Zone ever be opened again.

The group is suddenly sent rocketing through a wall, as one of Batman’s sonic pulses sends them flying. Superman, Wonder Woman and Luthor all turn to quickly to see that Batman and the rest of the infected League have arisen and pronounced “you are on odd species. We are us. You believe you are the dominant species. You are incorrect.” The issue closes with Luthor stating that he had feared this would happen, as the infected League stands assembled before them.

Alright, this was probably one of the issues that I was most looking forward to reading this week…but was really disappointed in the outcome. Normally Geoff Johns brings his A game every time, but it seemed that the “big reveal”, this “secret” fell very flat. The fact that we finally got the real reason as to why Luthor developed the Amazo virus was great…but the fact that Superman now holds the potential cure for everyone was so…typical. I really enjoyed this issue right up till the last few pages, we got a good recap overlaid with the current battle between Superman, Wonder Woman and Zero; we saw Batman manifest his metahuman power (love that he is now more bat-like then ever)…even Luthor surviving against Bullet made sense, and I liked that we got to see Captain Cold fight him off. However, the sudden reveal that Patient Zero now means nothing, but Luthor had secretly exposed Supes to the virus years ago and he has the right blood he needs…I mean come on! Why didn’t you say that to begin with?! This can’t even be described as a deus-ex-machina as they had a plausible solution with Zero but all of a sudden turned it into Superman being the cure. Just doesn’t make sense to me.

On the plus side, I am interested to see what has happened to the infected League members…and does it surprise anyone that Luthor “feared this might happen?”

Overall I really loved this issue right up until the last few pages…then it tumbled downhill from there. I felt this issue turned into a soap opera right at the end with Luthor and Supes, I half expect an evil twin clone of one of them to show up in the next issue. Rant over.