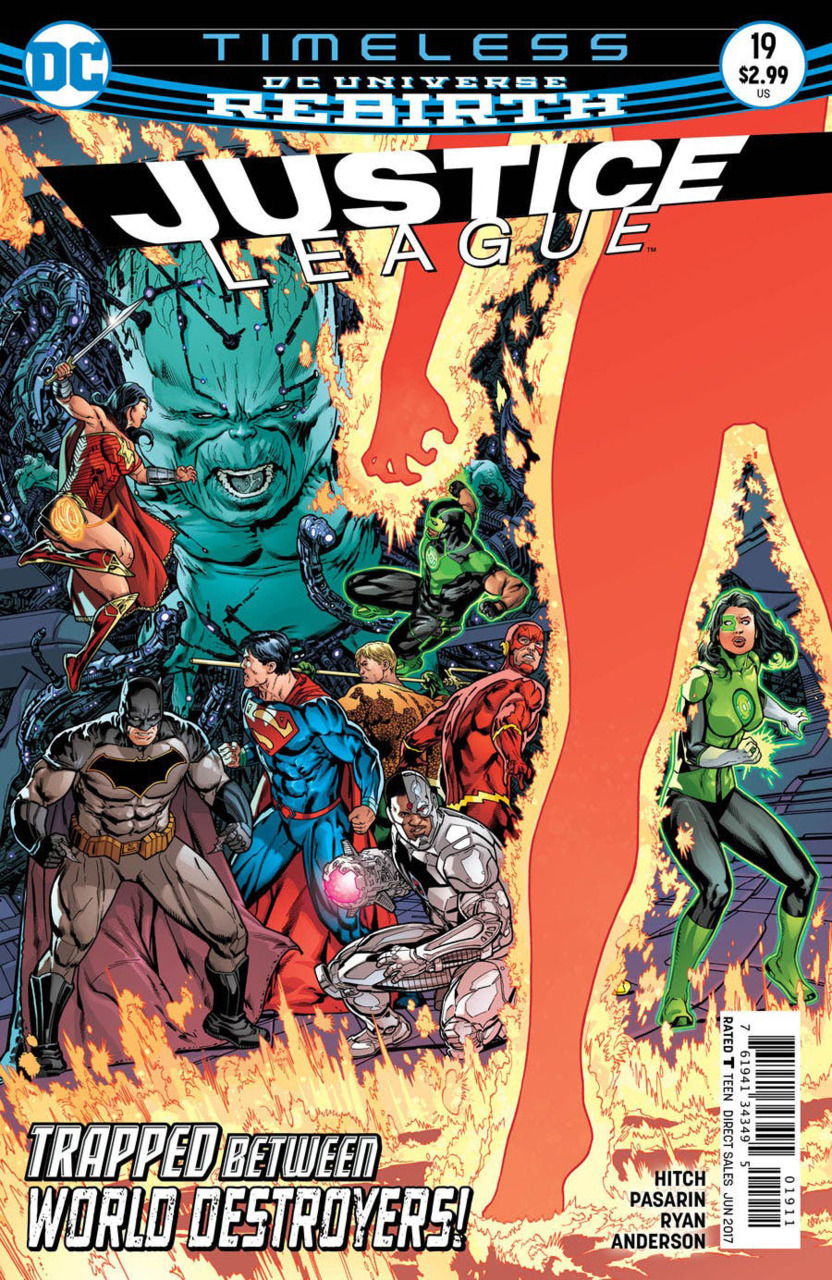 (Spoilers Ahead) “Timeless Part Five” opens with Vincent and Alexis in the Infinity Building. Earth has stopped being pulled out of space-time. They now detect a massive new energy source by the machine. Vincent tells Batman, Superman, and Jane to get to the machine while Vincent and Alexis deal with Tempus.

The three arrive to find a floating Molly. She now has control of the energy in the Timeless’ machines. She plans to wipe every being with superpowers from history. She starts her obligatory monologue about meta-humans being a plague. Gods, magic, and the Speed Force was created. Given time the green light will be captured by Earth just as the Guardians of the Universe had done. This will bring other beings with power to Earth by the legion resulting in the death of everyone. She tells the trio that something is coming because of the superpowers. They are people like the meta-humans drawn to Earth by the powers. The Timeless planned to move Earth and box it in at the end of creation and the death of the universe. She states that that is not enough, the power has to go. The only way to stop it is to kill everyone with powers and give humanity a chance at survival. In a bit of comedy, Jane asks Batman why did they let her monologue. Batman says it is how villains work because they like to talk. Besides it gives the heroes time to think things through. Superman in trying to reach the super powered Molly asks Batman to reach Lois and Jon. Batman agrees that Jon will also be a target of Molly’s wrath. Jane stays with Superman to fight by his side like her father did and give Batman the cover he needs to reach Jon. Batman accesses his suits AI (note this is Lex Luthor’s suit and Alexis apparently is a daughter or progeny of Luthor as was discussed last issue) to find Jon Kent. The AI takes Batman there.

Back at the Infinity Building, Vincent is outside with Alexis at the controls. She is concerned that Tempus may be too much for him. Vincent discovered that Tempus is a virtual mind connected through time. Alexis admits to liking Vincent sometimes to which he responds as he knows. He cuts his wrist horizontally with a knife and drips his blood into the circuitry.

The rest of the League in their individual locations discover that they are now able to communicate with each other. They are discovering that the machines are not being destroyed as they were told. They are all interrupted by Tempus. He identifies himself as the Timeless mind and that they were lied to by Molly. Tempus tells the League of her plan to destroy the powered beings, but now he has to terminate them. Vincent breaks through and is now able to use the Tempus virtual mind to communicate with the League. By bleeding into the Timeless systems, he is able to hijack the mind for a small period of time. He tells the League to destroy the machines, but they may all be stranded where they are. Tempus takes back over and the League gets to work in destroying the machines.

Vincent tells Alexis that before he was ejected, he planted some mind bombs. Vincent tells Alexis to do it presumably detonating the bombs. Outside, Jane is alive, but knocked out leaving only a weakened Superman to face the ultra-powered Molly. Elsewhere, the League make their last strikes at the machines. This weakens Molly by destroying her connection to the machines. She still holds the power in the machine they are at and she starts to direct that power at Superman. The two square off with Superman starting to blast the last machine with his heat vision. Molly threatens Jon.

Tempus communicates with a weakened Vincent. He knows what Vincent is trying to do, he counters that nobody knows what they are doing. If Earth remains, “it” will come and Vincent is counting on that.

Batman reaches Lois and Jon. The Timeless soldiers are stopped around them. Molly arrives to attack and Lois stands in front of Jon. She attacks just as Batman arrives to shield both of them. He goes down and the Justice League arrive in force.

We get a monologue of Vincent. The stones said that Superman made a difference. Because of the Justice League, the machines are broken and everything is returning to its proper time except for the Alexis, Jane and him. Now their job is to prepare for why they came in the first place. The stones are singing and Vincent and Jane start to glow.

A now subdued Molly tells the League that “its” coming. They do not know what it is, but they feel it. It is coming because of the powers. They will wish that Molly was successful. Next, the death of the Justice League.

This was basically your typical action issue to end the arc. This may be the only issue that completely followed a linear telling and that made this issue easier to follow which is not a complaint. I like different ways to tell a story and I for one do not mind thinking when I read comics. The action here is satisfying and each of the characters had their part in the final victory. On top of that we have a cliffhanger to keep us engaged with what will happen next.

The chief complaint with this issue, I have is in the art. It is not that the art is bad, the color pallet used adds to the mood of the issue and I can be placed in the action when I look at it. The complaint I have is why when Molly gained the powers of the machine, did the artist feel the need to basically shred her clothing to next to nothing. Her jacket and hat are gone and her shirt is shredded. The only in tact part of her shirt covers her breasts and her jeans were shredded to reveal her legs. I understand the need to show her power but could it have been done in a different way?

Despite all of that, it was an exciting and satisfying end to this arc. Or is it the end?