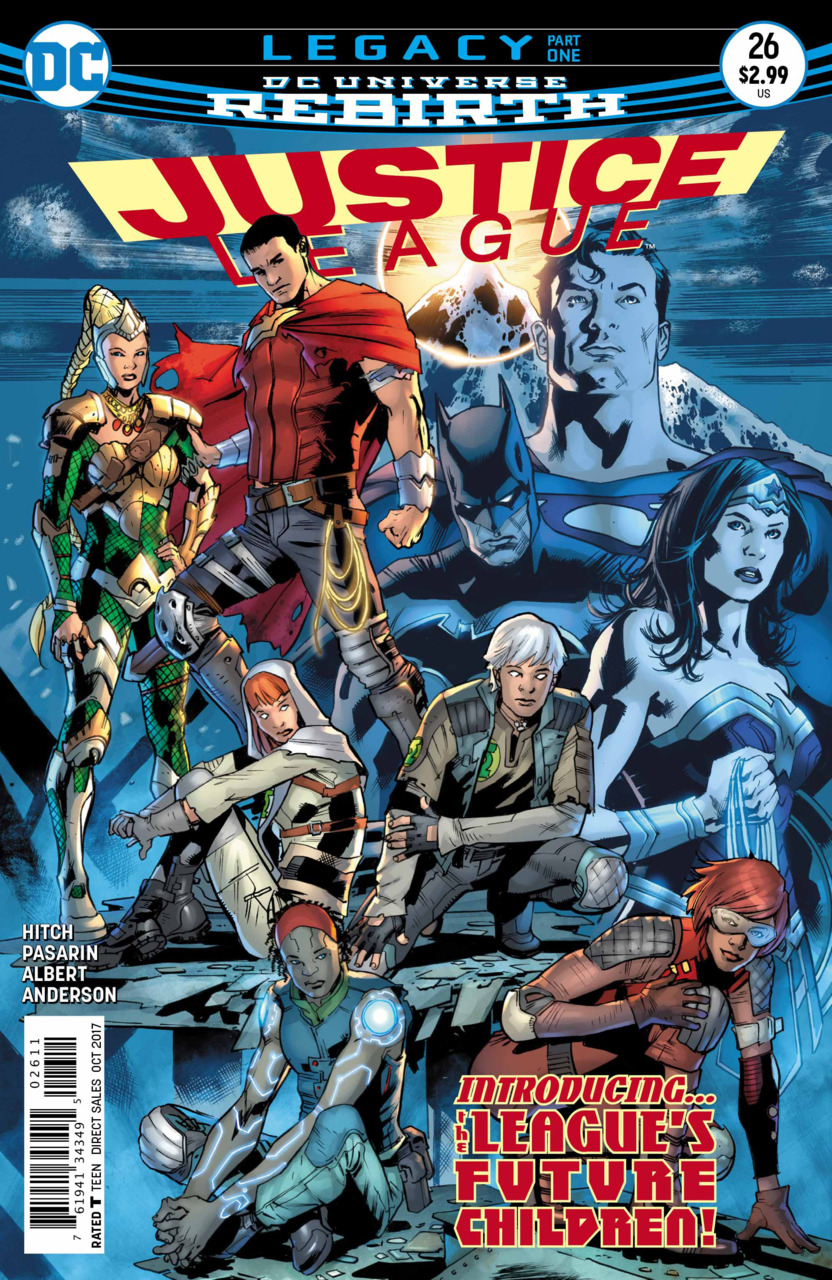 Overview: The kids of the Justice League in the future are fighting to stay alive and fix the problems of their devastated world. To do this they invade the ruins of the Infinity Corp building and open a portal to the past which deposits them in front of the very cause of the devastation, the Justice League.

Synopsis (Spoilers ahead): Legacy Part 1 begins in the dystopia future. A group of five young people are on Mount Olympus. They are wearing the symbols of Flash, Green Lantern, and Wonder Woman. One of them looks like they is augmented with tech. The leader of the group, Hunter is wearing Superman’s cape and bracelets like Wonder Woman. He is also carrying the magic lasso. The next page we find that they are in a devastated New York City 20 years in the future. Hunter asks the tech guy, Cube if he senses anything. A hologram appears and he says nothing but “it” could be cloaked or out of range and ready to boom-tube if the sovereign senses them. Hunter asks Cruise if Curry is there. Cruz who has super speed checked twice. One of the group asks if Serenity is there, she is late. Serenity shows up interrupted a flirting session between Hunter and Cruise. With Serenity gone from Atlantis, Tempest’s forces will be able to overrun the city in her absence.

Hunter mentions the “darkness” saying it is growing again and they have to stop it. The six circle up and with hands in the center they say that they are the only ones left that can stop it. They will together as friends and family. A huge man jumps in shouting for the kids to get away. It is Curry and he is wearing Cube’s father’s corpse. My guess is that he is referring to Cyborg. Curry knocks Cruise out of the fight with a temporal grenade. Curry tells them that they should not have come and they should have stayed hidden. Hunter jumps him, shouting that he used to be a hero, but now he has been rejected by the seas and kept alive by Cyborg’s old body and he has a daughter who hates him as well. Curry tells Hunter that they are way over their heads and they need to stay out of it. A red construct and a yellow construct attack Curry as Serenity tells him that she stopped being his daughter when he stopped caring that she was. Curry is Arthur Curry, Aquaman. In the fight they see that Curry is wearing a dark ring, The art shows that it is a Black Lantern Ring. Serenity uses magic to knock Curry off balance saying that she thought all the dark rings were destroyed in the light fall. Serenity alludes that Curry did something to her mother which I am guessing was Mera. Serenity teleports the group out and onto the mountain.

The group approach the ruins of the Infinity Corp building. These kids have not seen this building in over a decade. They hear singing. They find the stone chamber is a mess and the skeletal remains of Vincent on the floor. Hunter says that Vincent sent him the message that brought them here now. Cube can still hear Vincent. We see his face on a damaged view screen. He tells them that there is one chance to save the world and end the darkness. The stones will know where they need to go. The Sovereign, a huge robotic being attacks shouting that there is no mercy, no compassion, only grief and death. Serenity engages Sovereign who also looks female but we see nothing of her face or body. The others start to work on the stones as Hunter joins Serenity in fighting the Sovereign. Sovereign easily knocks Hunter away, but the stones start their singing and a portal is opened. The kids jump into the portal.

Midway City in the present time. Flash and Green Lantern have captions describing the slaughter that they are seeing. Wonder Woman replies that they did this to each other. Cyborg finds that the destruction was caused by enhanced strength. Baz asks if the people got super powers and then killed each other. Superman is at a loss of words at the devastation and carnage. Wonder Woman has seen this too often, she left Themyscira to stop this and every day she has failed. Superman says that they do make a difference and they are not failing. Wonder Woman replies that they stop aliens and when they leave the people go back to killing each other. Superman says that they try to inspire and not use fear and strength to enforce their point of view. Wonder Woman says that she cannot do this anymore. They need to act to make the world a better world, not just protect the world. A portal forms in the sky and the kids from the future fall through in front of the Justice League. The League immediately ask them who they are and Cruise responds that they are their children and the world is almost finished. Hunter adds that it is all the League’s fault. Next issue Justice League: The Next Generation.

Analysis: This issue finally begins the next story arc. Not a lot is happening here and we do not know what is exactly going on, which will hopefully be answered as the story progresses. For a set up issue this is good. We see the devastation in the future and ironically we see the devastation twenty years in the past as well. My big question is who is the Sovereign. Is she Wonder Woman? The implication from the League’s conversation is that she is moving closer to being an enforcer instead of a peace keeper. The future kids also blame the League for the devastation of the future.

The art here is different than I am used to. Wonder Woman’s face in particular does not look right. Her hair looks flat and stringy. I particularly not a fan of her features in the top panel of page 18 where she is talking about the alien invasions and the mass slaughter of the people.

Final Thoughts: I do not have much else to say except that I definitely want to continue reading to see how this story pans out. I will give this issue a 3.5 out of 5 batarangs. I am not a big fan of the art but I am willing to stick with this story to see where it ends up.