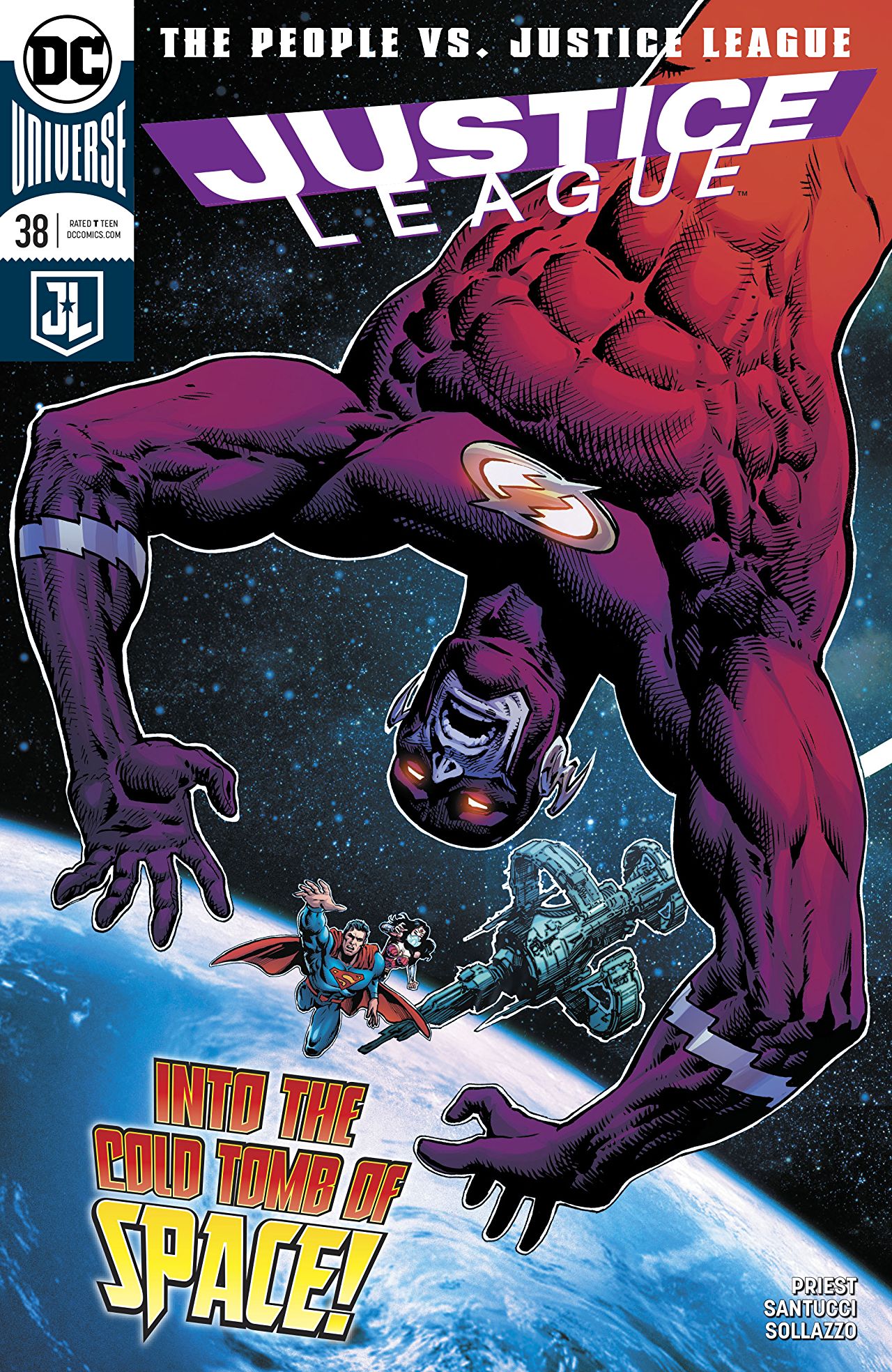 Overview: The Flash to the rescue as the League regroups.

Synopsis (spoilers ahead): Alone on the Watchtower satellite, the Flash (Barry Allen) talks to himself about how it’s silly to expect a forensic scientist to be able to fix a space station.

In Niger, Cyborg arrives to find Wonder Woman playing with some children. She notices that Victor has chosen a new technological way to disguise his metallic parts, and he says it’s taken a while to collect the Justice League after the Fan scattered them around the earth with the hijacked teleporter from the Watchtower. Cyborg refuses to use the teleporter until they can lock out the Fan (a deranged former tech who helped construct the Watchtower and thus has access to all their systems). Meanwhile, Jessica Cruz, Green Lantern picks Batman up in the Nepalese mountains, carrying him home in a giant green snow globe. The two discuss the problem at hand, Batman being much crankier about it, naturally.

At the Daily Planet, Clark Kent dodges into an unused meeting room to join holographs of his super-colleagues in a council of war, minus Batman, Jessica, and Flash. Simon insists that Superman talk to Batman, while Aquaman is obsessed with trying to keep the damage of the Fan knowing so much about them to a minimum. Diana joins Simon in urging Superman to try to moderate Batman’s extra-curricular efforts.

Flash is alerted to a Lexcorp shuttle crashing into the docking arm, which is offline, as Cyborg is slowly locking the Fan out of the system. He attempts a dangerous spacewalk rescue of one crewmember who has gone extravehicular in the crash but runs out of fuel in his spacesuit.

On the other side of the station, the Leaguers from the meeting with Superman disembark, Simon loudly complaining about how Superman’s invitation to get lunch has unnerved him. He also brings up the issue of the “Trinity” – the massive disparity in power and image of Batman, Superman, and Wonder Woman, and the rest of the League.

Flash, having drifted to catch the doomed crewmember, uses his speed to get some bearings. Batman and Jessica arrive, and Superman comes face to face with his closest, but also most contentious, friend. Flash forms a hazardous plan – vibrate out of his suit and use the floating debris from the shuttle to get back before decompression and coldness kill him. He doesn’t quite make it, and his suit fades away as his speed force loses coherence, and he exhales to prevent lungs bursting as cold overtakes him.

Batman agrees to take a few weeks off at Superman’s request, and they hear Barry’s quickly freezing body thumping into the station. Flash wakes up, glad to hear that the tech he almost died to save is alive and well thanks to him. In the Watchtower locker room, Bruce has changed into civilian clothes, and Jessica follows him. Batman says he’ll use the time off to figure out how to deal with the Fan. They seem to embrace or kiss as Jessica says things will be complicated. Bruce walks alone back to the bridge of the station and chooses Cyborg as his interim replacement as chairman of the League.

Analysis: In some ways, this issue functions as a way for Priest’s run to take a breath. With the announcement of “No Justice” by Scott Snyder and many collaborators, we now know that Priest will be writing a 10-issue arc – what would normally be almost a year’s worth of comics, but in this era’s double-shipping schedule, will take less than half that time. We are hitting the halfway mark here, and Priest has revealed one of his major threats – The Fan – and shown the Fan defeating the League fairly significantly by teleporting them all over the world. Thus, this issue deals with Cyborg’s attempts to bring everyone back together. Additionally, it continues to deal with the fallout of Batman’s life-costing mistake in the first issue, with Superman being persuaded to ask Batman to take some time off to rest and take care of himself so that his work with the League won’t be compromised. It’s interesting to see Priest nod to Detective Comics and Justice League of America, though so far he’s shown little interest in actually affecting the course of those books. But on the whole, the general tone of this issue continues Priest’s focus on showing the League as a functional unit, veterans of vital life-saving work that is nonetheless a regular job for them. The rivalries of the Trinity and the other Leaguers are brought up by Simon, a newbie. Though perhaps not quite as specific as similar concerns voiced by Arthur in the first arc of the Aquaman Rebirth series by Dan Abnett, it’s something that deals with the large powerset and popularity of the Big Three – and what that means, emotionally, to their friends who just aren’t as “big.” It’s a very human moment in the world of gods and monsters.

Even though Priest is trying to build this series like a workplace drama, he’s been cautious to have at least one significant action set piece per issue. This week has Flash’s terrifying speed-force-space-run-without-a-suit rescue, and Barry’s internal planning and execution of the action hits perfect character and superpower-usage beats. Marco Santucci also does an excellent job at showing the emotion and physics of the rescue. Though Santucci’s panels showing the full bodies of characters can be a bit unpolished, his two-page spreads are gorgeously rendered, particularly Wonder Woman’s entrance early on. During the Flash rescue sequence, Santucci’s talents bring the best to Priest’s particular words.

The one weak point in the issue is the repetition of something that’s become pretty common in these past few weeks – Batman, who is now engaged to be married – seemingly kissing another woman. In this case, with very young newer member Jessica Cruz. Though their early interactions this issue are fantastic, with Jessica’s nervousness at Batman’s terrifying stoicism lending a lot of comedy to the seriousness of their situation, highlighted by Jessica’s choice to bring Batman back to the Watchtower in a Green Lantern snowglobe, the conclusion of the issue hits a lot of wrong notes. Like Tom King’s Batman hint at Batman kissing Wonder Woman while trapped in a different dimension, it’s almost certainly some fakeout. Priest has already had Batman tell the team he’s going after the Fan alone but was collaborating with the League’s other Green Lantern Simon Baz, so this is most likely a case of Batman and Jessica planning something in secret (or even someone in disguise as Batman again). However, doing all these romantic teases when the emotional energy of a Batman fan would presumably be building to the wedding plans promised for Batman issue #50, coming up quickly, writers keep teasing Batman playing the field with other super-ladies. It feels very much like editorial is refusing to quash their writer’s ship-teasing of the fans. Though it may lead to some compelling drama, the negative fallout in the fandom at feeling like their hero is seen to be cheating is likely to outweigh the benefits, at least as the issues come out. When collected as a trade, it will likely make more sense – but will it have been worth it? Only time will tell.

Final Thoughts: The League struggles to deal with the impact of the last several issues in a twisty but uneven breath-catching issue.