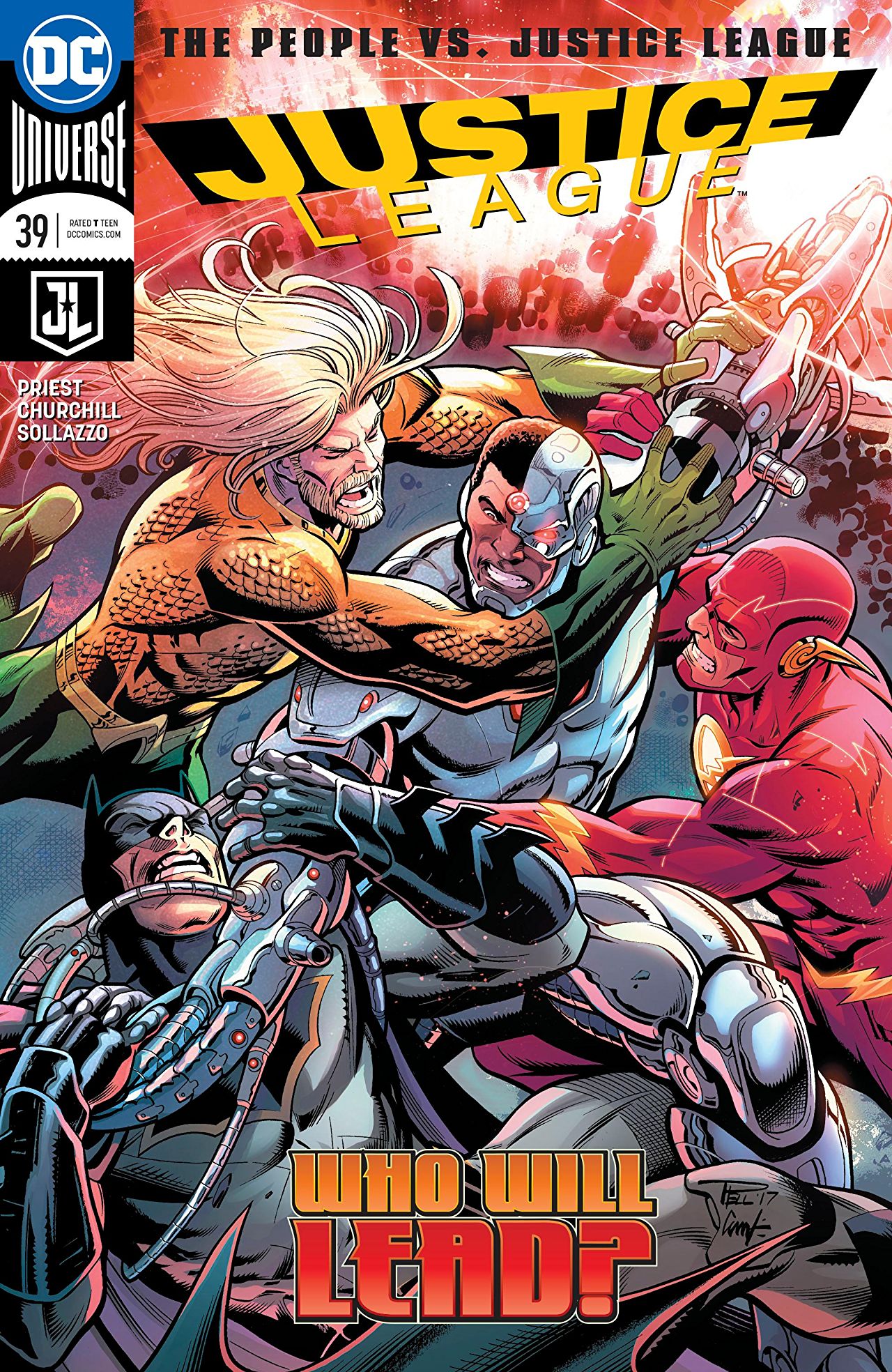 Overview: The League’s public image takes hit after hit as they deal with continuing crises.

Synopsis (spoilers ahead): Aquaman, stranded in the desert, fights off bandits while dehydrating quickly. The Fan saves him by killing some of the bandits. When Arthur says he doesn’t need the Fan’s help, the Fan tosses him a lifesaving hydration suit and says that the League will have to kill him to stop him. The Fan teleports away as Simon Baz, Green Lantern, arrives to rescue Aquaman.

In the US House of Representatives, Cyborg arrives as the League’s new Chairman, surprising Regina Cole, the League’s new lawyer. Cyborg deals with the disbelief of the committee, as well as the news that a whole group of Batman impersonators are protesting outside the building.

Batman, supposedly taking a break from the League, is working with his own team, the JLA, to help with a derailed train transporting highly toxic chemicals.

Jessica Cruz, Green Lantern, is woken up by her sister. Jessica is still clearly not coping with whatever she is up to with Batman.

As social media heats up about Cyborg, a black man, being the leader of the League, he fends off Ms. Cole and greets J’onn J’onzz, the Martian Manhunter, who tells him he needs the League’s help.

Jessica, flying up to the Watchtower, is also surprised by J’onzz with the same request – that both Green Lanterns assist him in the Metal crisis. As Cyborg takes control of the train situation, he sends Wonder Woman, Superman, and Flash to assist Batman’s team. Social media notices that the League seems to be ignoring the poorer victims of the crisis. Cyborg gets a call from one of the people in distress, who points this out to him, and he decides to stop trying to run the League from the Watchtower and go where he should have been all along – in the thick of things.

He leaves Ms. Cole in the satellite alone, and she lights up a cigarette and what looks like a welding torch, saying “Let’s get on with it.”

Analysis: While Priest continues to weave a solid, complicated story around the world’s greatest heroic team, he ignores the biggest element that caused fan commentary in the last issue: Batman and Jessica Cruz’s relationship. While obviously, this relationship is from a longer-running plot, it seems odd that Priest chose to just hint at Jessica’s reactions to the apparent kiss by having her freak out and then get sent away to deal with the Metal event.

Artist Ian Churchill provides solid art, matching the last few issue’s Phillipe Briones and Marco Santucci well. There’s a warm glow to the coloring of this book, which makes even the dark moments of the book feel exciting and engaging rather than despairing.

Priest’s political engagement with the issue of who the League rescues and what it says about the priorities of the League is an interesting one but feels a bit heavy-handed. It’s obviously supposed to lead to a clash between Batman’s JLA and the League, as shown on the cover of the next issue, but one wonders how Priest plans to resolve it, or if he wants to leave us with the impression that for all their good intentions, the League is as susceptible to bad optics and decisions as anyone.

Final Thoughts: A train crisis highlights the fracturing of the League as mysterious forces continue to work against the team.