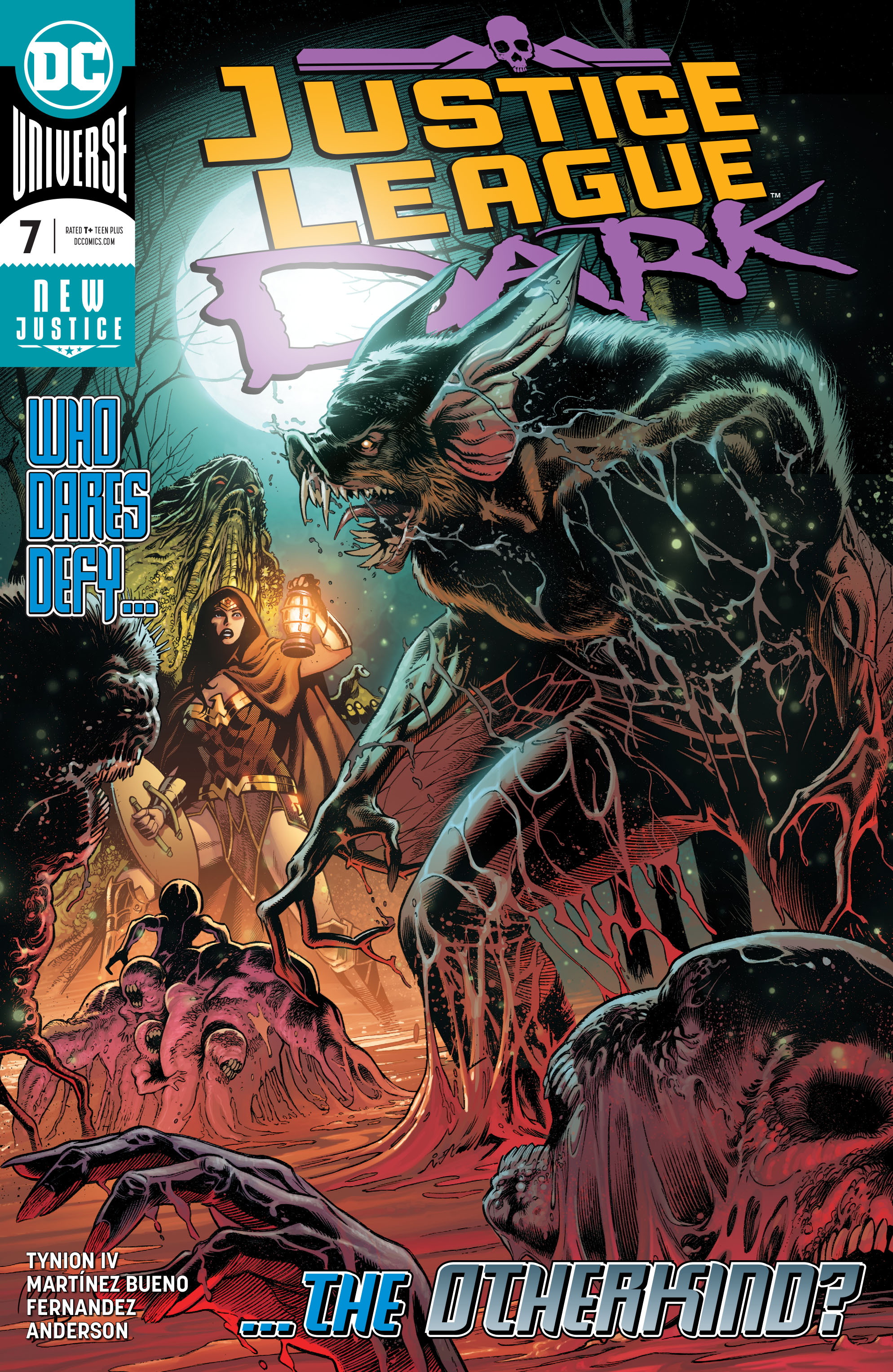 Overview: Man-Bat shares some of the team’s experiences with the Otherkind.

Synopsis (spoilers ahead): Late on a rainy night in the Hall of Justice, Man-Bat sits in front of his typewriter journaling about his last mission with the team. He waits until late at night to type on his old typewriter because Detective Chimp hates it. Although, recounting the horrors they face in the middle of the night is probably not a good idea. Man-Bat says he is scared of sleeping for the nightmares have gotten worse — worse than anything he has ever prepared for.

He asks “What do monsters fear?” He supposes he should know something about that since he is Man-Bat. These monsters fear a more frightening story than their own. They fear the Otherkind, and they are here. A war has begun in the shadows. They plan to destroy and consume all magic on Earth. Time after time, the JLD has arrived too late to help. They just record what they have seen, and what they believed has occurred.

He started recording each of their findings. But, the more he writes, the worse nightmares he gets. He ponders if they should burn all of his papers and flee until he is free from these monsters. But, he must stay the course and prevail.

He opens a drawer and pulls out one of their cases. He shares the case of Mr. Patrick Cadence. This man had dark, cruel appetites until the day he was given a red card with an address on the back. And, there are three little words on the front of it: The Morning Star.

This man goes to the location and presents the card. The receptionist tells him they keep no records. The Morning Star guarantees absolute satisfaction — any desire can be made reality behind these doors.

Inside, Zatanna is there talking to the owner, Lucifer. Although she finds this place disgusting, she needs his help. The Otherkind are here. He needs to evacuate demonkind into hell, and open up his kingdom to refugees. Before he can answer, one of the Otherkind enters into the room holding the head of the receptionist. Before she can speak, he kills her. Lucifer teleports Zatanna away and confronts the Otherkind himself. He says they should have come to him first so they could have made a deal. Lucifer threatens that at the snap of his finger, his vast armies would attack the Otherkind and slaughter them. He snaps his fingers, and a flood of demon blood rushes into the room. He is surprised about why this is, and the Otherkind said it “did hell first.” The Otherkind then drowns Lucifer in his demons’ blood.

Man-Bat reads another one of his stories, the story of Andrew Bennett. For centuries the vampire Andrew Bennett has hunted Mary, Queen of Blood, across the face of the Earth. He hunts some of her foot soldiers in New Orleans. He kills one of the men and the other escapes. As Bennett is running after the escapee, he is captured by Swamp Thing and Detective Chimp. They warn he should not go after the escapee. He is in a tomb where creatures from the abyss are. Bennett leaves, ignoring their warning. He walks into the tomb, and he sees all the dead bodies trying to join together. They utter “Join us!” to him. He flees, scared for the first time in centuries.

Man-Bat then recounts the tale of when the team went to the Arctic Circle. A United States nuclear submarine sent a distress signal. The captain alerted they were lost and it’s cargo could not be safely retrieved. The only course of action is to sink the ship. The captain then shot himself. The recording ended with teeth ripping through flesh.

This message made its way to S.H.A.D.E. When they are faced with a monster beyond understanding, they send in their team of monsters to counter: Frankenstein and the Creature Commandos. One of the commandos examines one of the corpses and acknowledges this man’s organs were hollowed out with surgical precision. She asks why this is. Diana comes out of the shadows and answers that it wanted meat. She warns everyone should get off the ship. Frankenstein tells her they face monsters all the time, and he commands his team to search the lower decks of the submarine.

Frankenstein asks Diana if she had ever seen the creature they are hunting before. She says she has not, but she has seen the destruction it leaves behind. He states she sounds afraid. She confirms his suspicion and says these strikes are targeted to create stories. There is power in stories, especially the ones whispered in the dark. The more people believe in these creatures, the harder it will be to get rid of them. Suddenly, a host of monsters attack Frankenstein. He tells Diana to leave, and he blows up the submarine.

Man-Bat comments he does not remember writing that story. He also finds another story among his papers.

Zatara tries to use his magic, but it is of no use once again. The monsters in this realm are just too strong. Sargon says it feels as if they have fought this battle for decades. He is tired. Zatara tells him the Upside-Down Man has pierced the veil of reality. The Otherkind are in their world. He has trained Zatanna for this moment, but she does not understand the role she has to play. But, there has never been a better chance to break the barrier. He asks Sargon for the ruby of life. Using magic, he commands the ruby to give Zatanna the answers she seeks.

Man-Bat says something is wrong. This is not one of the stories he knows. Perhaps the Otherkind are using him to write these stories. He thinks about burning all of them. He calms himself saying it is late and he needs sleep. As Man-Bat is about to put his head on his desk, the ruby from the story appears.

Analysis: I like this issue, but I did not love it.

Tynion used a very interesting story-telling mechanism. Unfortunately, I am not sure how plausible it is. He has Man-Bat narrating these stories to us, the reader. But, it still references things happening to him at the moment. It is a weird mix of classical story-telling and breaking the fourth wall. It just does not work for me.

I also feel this issue is a filler issue between two arcs. I am not sure what the point of it was beside saying the stories about the Otherkind are getting stronger and how stories breed strength. To me, you do not need twenty-two pages to tell me that.

In each story, Tynion did a great job. I just didn’t like how he glued all these stories together.

Here are the things I liked about this issue:

The art in Justice League Dark has consistently been some of the best are in DC. It is a beautiful book.

Final Thoughts: This is a decent issue between arcs. The next arc is about the Lords of Order. So, I am pretty excited about what is to come.