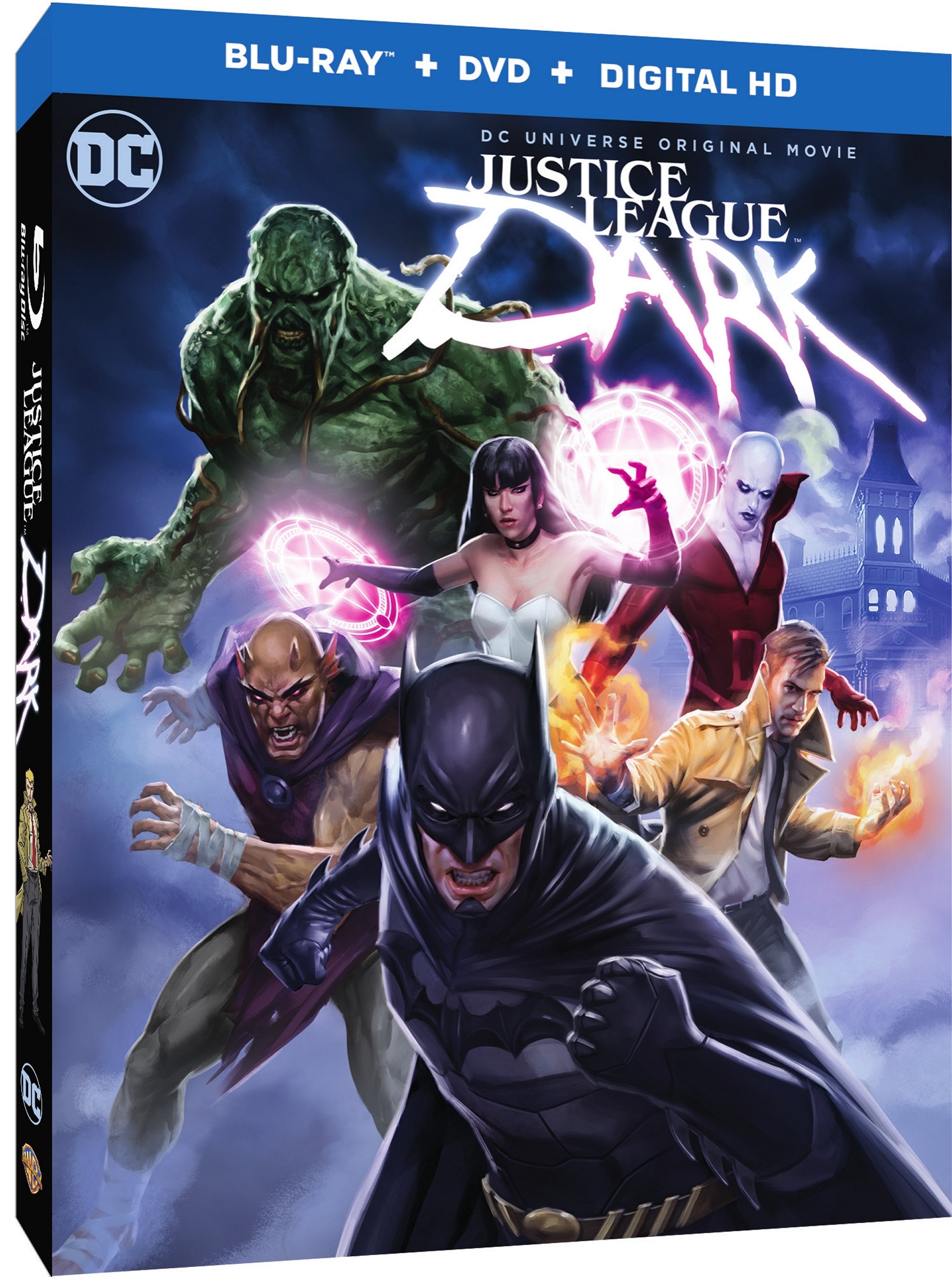 The occult and supernatural side of DC has lost its live action film only to gain an animation one. This newest addition to the DC Animated Universe – DCAU for shorts – features a hesitant team of not exactly heroes who gather to face a threat that goes beyond the Justice League’s understanding and realm of action. Despite having little material as a direct source, the Justice League Dark comic having lasted only for 40 issues, the plot written by J.M. DeMatteis and Ernie Altbacker is far more entertaining and better put together than what I have come to expect from recent DC animations.

The opening sequence shows people going on a rampage because of demonic hallucinations. After deliberating about the issue in a League meeting, Batman dismisses the possibility of the cases being supernatural, only for supernatural itself to come plaguing after him. Deadman – former circus acrobat, current ghost – writes Constantine’s name all over Bruce’s bedroom walls and possesses him for a short while, convincing him of going after Constantine. Batman decides to seek Zatanna, the one magician he trusts.

John Constantine meanwhile is playing poker with the Demon Three and Jason Blood. In the betting pool is not only the House of Mystery but also a crimson crystal called the Dreamstone. The game goes to hell, as expected considering the gentlemen who happened to be gathered. We are introduced to Etrigan, whom Constantine forcibly invokes by taking command of Jason Blood, the host of the demon. Etrigan wins the battle with the Demon Three and Constantine leaves with all the goods on the betting pool.

Deadman and Batman meet with Zatanna after one of her magic shows. They set out to find the House of Mystery, home of John Constantine. In the Batmobile. Yes, you have a ghost and a powerful magician and you take the Batmobile. Go figure.

After being chased by a hurricane which is only there to add some danger to their road tripping, on the way to a house with no specific location, they stumble upon the house’s threshold, being welcomed by Black Orchid, a physical expression of the House, and not so welcomed by Constantine himself. Together, the four of them go visit Ritchie Simpson, a friend of Constantine whom he thinks has a better chance of explaining what is happening. Ritchie sends them after Felix Faust, producing one of my favorite scenes in the whole film. A spell casting battle ensues, with wands, spell books, mandalas of power and a water cube that is almost a direct reference to the duel between Voldemort and Dumbledore in the Ministry of Magic. What is great in this battle is that it is made clear that there are multiple different types of magic and, despite being all in the same universe, the nature of each of those character’s power is unique.

The final battle of the film is won by magic and a little bit of deceit. The Justice League gets involved, but they are rendered useless for their weakness when facing magic – and because you can’t have them saving the day in a Justice League Dark feature. In fact, Batman himself is only part of the plot for the sales numbers, and it shows. His fleeting importance is only to seek Zatanna at the beginning, throwing a batarang here and there and muttering a random hrrm when he is not being the silent presence in the scene. Actually, since we have him thrown into this film, I prefer it the way it was made than if he was to have a big role. As it is, the protagonist of Justice League Dark is John Constantine, closely followed by Zatanna.

Those two characters, specially Constantine, are more than capable of holding this film on their own. His character comes from the Hellblazer series, having had the genius mind of Alan Moore behind it. His utterly despicable moral and sharp English sense of humor make him an amazing character to watch, overshadowing Batman’s broodiness. Matt Ryan, who played him in the short-lived live-action television series, returns as a voice actor and does a fine job of it. His accent though distracts me a bit, since it is a mix of more than one British accent, which had me trying to figure out where it came from while watching. The voice actor that shined to me however was Ray Chase, who plays both Etrigan and Jason Blood. He goes from proper English knight to hoarse, gritty demon and nails both ends of the spectrum. The one low of the voice cast was Enrico Colantoni as Felix Faust, who straight up sounds like Toki from Metalocalypse with how high-pitched and cartoonish his voice was.

Talking about metal, Robert Kral’s score had me hooked from the beginning. Specially in the main title, you can hear industrial and dubstep references, mixed with a traditional eerie harpsichord. It is a great mix and match and, surprisingly, it does work, the tones establishing a dialogue with the horror themes and action scenes being portrayed.

When it comes to DCAU films I don’t expect a masterpiece, but it is refreshing to see different characters with a different tone being portrayed. Watching Justice League Dark was an overall enjoyable experience, despite the not so great animation that has unfortunately become the signature of Warner Brother Animation when it comes to DC. The plot itself has some twists that guarantees the viewer’s attention up until the end, despite having left unclear who exactly was responsible for the hallucinations and why they were happening. The voice cast holds up very well and the score is the first one in the DCAU to have left an impression on me. The characters are well introduced, well woven into the plot and charismatic, having being developed enough that they might well come back to a second round of magic casting – perhaps this time with no need for Batman to step into it.

Editor’s Note: Justice League Dark is available on Blu-ray and DVD today, as well as digitally. You can purchase your copy of the film by heading over to Amazon.