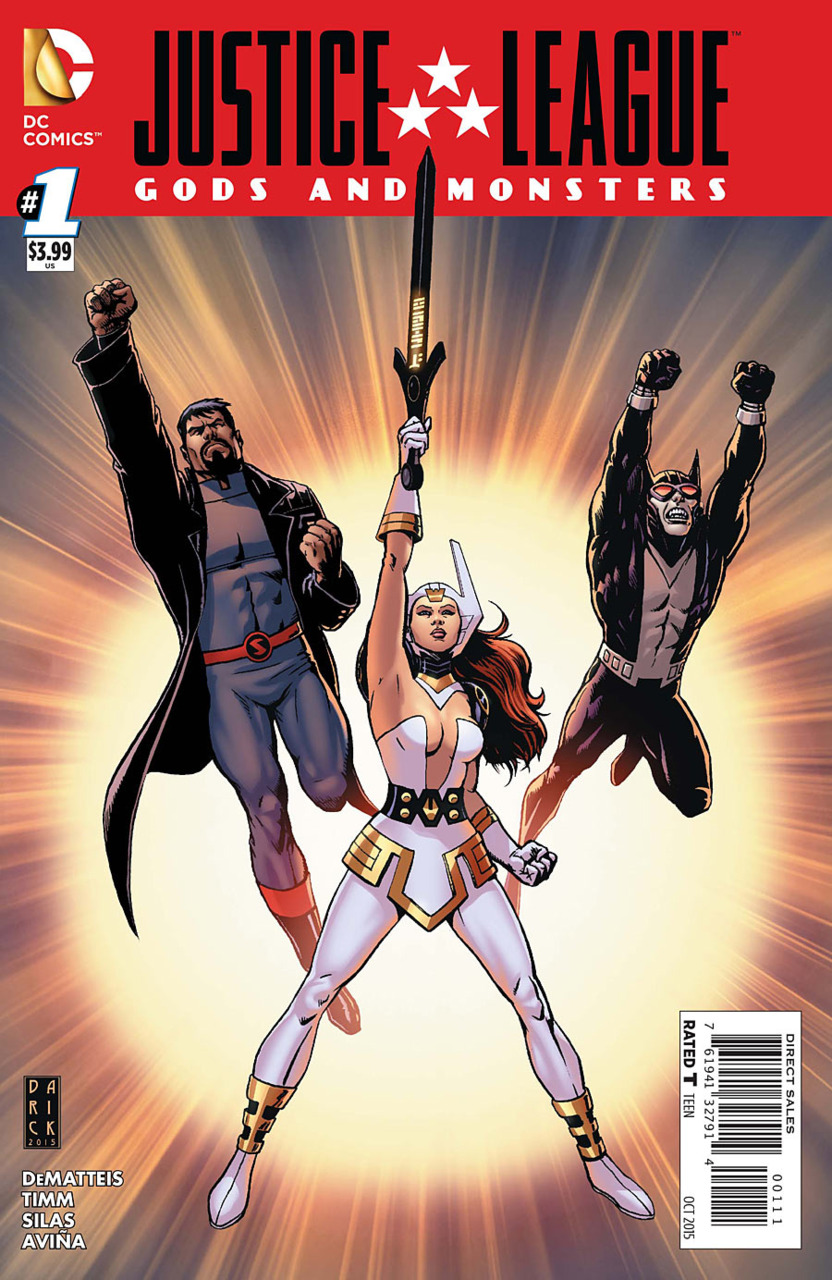 The issue starts with a brilliant recluse, Jackson Alpert, holding a conference in Switzerland that is told will change the world. We see a hologram version of Alpert talking about how fragile humanity is but that he has developed the means to make humanity reach its full potential. Alpert then unveils his Forever People and announces that he will be giving the process that created them to the rest of the world.

The next scene takes place in Gotham where we see Batman rescue an abducted girl from a basement. He quickly kills the man who was holding the girl and returns her to her mother.

In San Francisco, Wonder Woman saves a crowd of people from a falling helicopter. The media notes how quickly Wonder Woman disappeared following the incident. We get to see Wonder Woman utilize a boom tube to travel to Stonehenge. There she comes across Superman and they “reminisce” about their relationship.

Shortly thereafter we see Superman arrive at Metropolis Central Station to stop a mass shooting. Superman draws the shooters’ attentions as soon as he arrives and allows them to shoot him to prove that bullets have no effect on him. He informs them that they will not be leaving the station alive. Superman presents himself to the media and directs them to all the innocent dead inside the station as justification for his killing of the shooters.

There is plenty of news coverage following the shooting and we see President Amanda Waller weighing her options in regards to dealing with Superman. During this time, Wonder Woman is with Alpert’s Forever People and helping them quell riots in Brazil.

Batman and Superman meet on a rooftop in Gotham to discuss Jackson Alpert and his Forever People. They agree to both look into the man who is trying to change the world. Superman goes directly to The Eternity Institute to confront Alpert. There he discovers Wonder Woman has joined Alpert. Alpert invites Superman to stay and learn more about his research. It is revealed that Alpert is crippled but his ForeverTech can’t heal him due to a genetic abnormality.

Batman is in San Francisco and interrogates a Howard Barrison as to how much information he has on Jackson Alpert a.k.a. Doctor Psycho.

The final scene of the issue shows Superman undergoing the ForeverTech upgrade process. Wonder Woman explains why she opted out of treatment. Immediately after the upgrading begins, Superman appears to be in extreme pain and wants to get out to which Alpert states that “it’s a little late for that”.

Throughout the issue, events are being commented on in a running monologue from an unnamed observer. It appears that the observer is Lois Lane given how much detail the narrator provides on each incident which would require someone to be plugged into all media outlets to be so informed. However, the narrator does identify Batman as Langstrom which could mean this narrator might be someone else or even another superhero.

After the individual one-shots that preceded this for the three main characters, I was definitely excited to see the formation of this alternate Earth’s Justice League. Each of the one-shots gave us a good starting point for each character and an idea about where they are headed. In this issue, we get to see some overlap between the paths of certain characters without getting the full Trinity together. It was cool to see a Batman/Superman conversation that was reminiscent of so many we’ve seen before but twisted to fit this more violent and darker universe.

The artwork in this issue is very similar to that of the animated movie. Each of the character’s origin stories had their own distinct style but we see now they are under the bold style that matches the animation in the film. Despite dark moments in this prequel story, the issue is full of light and color.

My only complaint of this issue is that we, as the reader, have to just accept that all three of these heroes have this history with each other but we never have seen it develop. Batman and Superman seem to already have a friendship while Superman and Wonder Woman clearly already have a love/hate relationship. I know that this story with the Forever People will be the crisis that ties the three of them together to form the Justice League. However, there seems to already be a backstory to their relationships that we have not seen any build up towards in previous one-shots.

Apart from the rushed backstories, I did like the issue and am glad that they are developing this alternate universe. Hopefully, we will get to see more different versions of our other favorite characters from the DC Universe as the story continues into The Forever War.