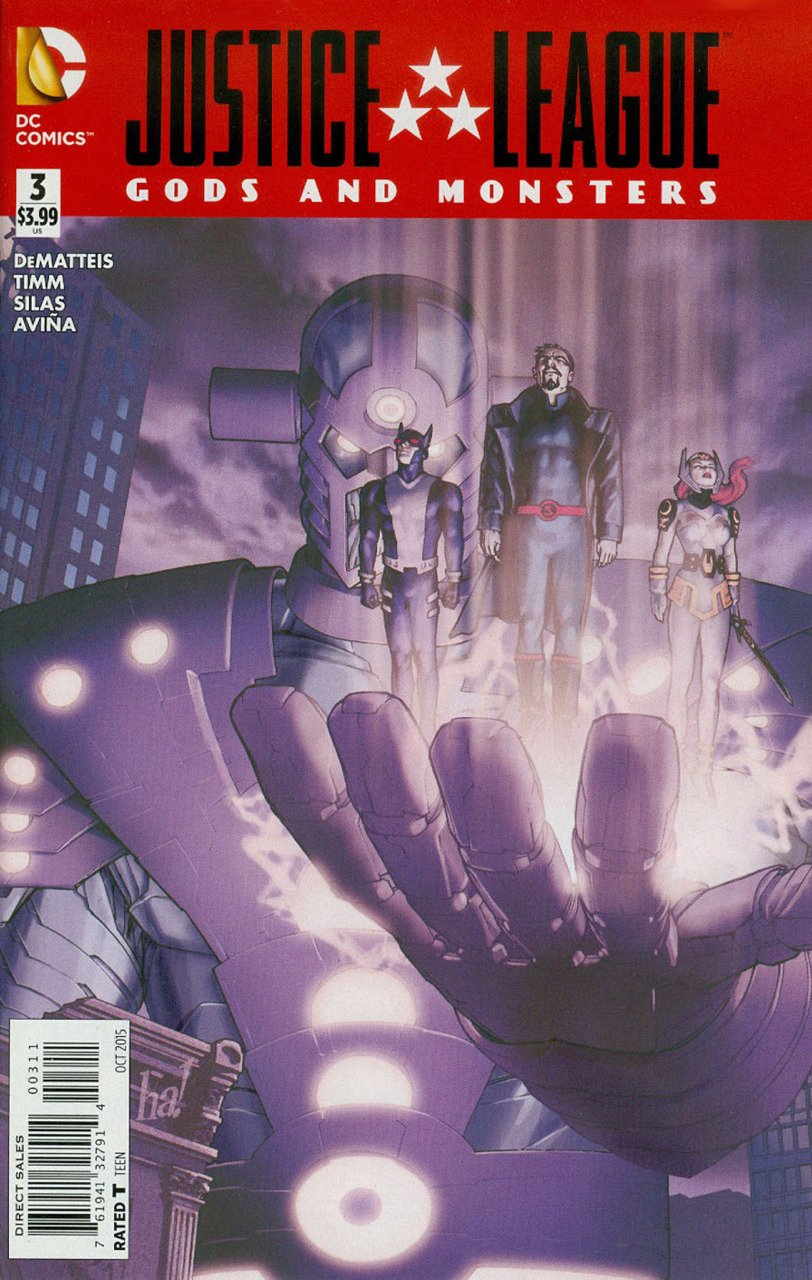 The issue begins with the return of Doctor Psycho as the robotic “Imperiex”. The Justice League determines that it was with their DNA that Doctor Psycho was able to evolve. Imperiex claims to be a god and will be bring order to the world through mind control. The League begins to fight him but he quickly overpowers them and takes over their minds.

In Zurich, Imperiex uses the mind controlled League to defeat the police and military. During the fight, Wonder Woman’s Mother Box helps them break free of the mind control and begin to fight back. Imperiex grabs Mother Box after she materializes and crushes her to the screams of Wonder Woman. When the Mother Box is destroyed, a Boom Tube opens and transports the League and Imperiex to an abandoned city.

As they renew their assault on Imperiex, he blasts Wonder Woman out of the area to which Superman orders Batman to take care of her while he fights Imperiex. Batman offers to help but Superman yells that he does not need them and “never did”.

Superman flies back to Imperiex and starts to get a solid beat down from the giant. As Superman is getting beaten, Wonder Woman discovers how they will beat Imperiex and sends Batman with a piece of Mother Box to pierce Imperiex’s head. Batman then uses “psychic fangs” with the help of Mother Box to drain Imperiex’s energy. Once Superman and Wonder Woman join Batman, they all link up psychically to invade Imperiex’s mind and turn him back into a man. They promptly decapitate and incinerate him before he can return to robotic form.

Upon defeating Imperiex, President Waller and Lex Luthor arrive with an army to discuss the future with the Justice League. They all go to an underground bunker to talk and arguments begin over the effect of the League on the world. Waller shows Superman that he overestimates the public support for the Justice League. The government then proposes the plan that the League will have a headquarters on Earth and will show the world that the League is there to protect the planet.

The issue closes with Superman saying public support will sway their way and that the government will not be able to control them. The final monologue is Lois Lane reporting on the Justice League’s new presence in the world as “saviors” but that she still hopes they will fall.

This issue was not the strongest finish to the prequel story. The action and artwork held up and redeemed the issue to some degree. I felt that the plot fell apart to some degree. I know the creative team was trying to lead this story directly into the animated movie but I felt that this, ultimately, rushed their storytelling and gave us a weaker plot.

The villain Imperiex/Doctor Psycho was one thing that really hurt the issue and took me out of the story. I felt that his character had served its purpose and that the writer could have used another character from the Eternity Institute as the final villain.

Even with the great action, I was very disappointed with the ultimate takedown of Imperiex. Between the “psychic fangs” and the League’s combined psychic attack to reverse Imperiex’s evolution, I just wished the creative team could have developed a better plot device to return Imperiex to human form.

Like I said, the art was good and gave us a major payoff in this issue with a ton of action. Overall, the art team has done a great job on the prequel issues in connecting with the style of the animated movie. It really did seem like the team knew how to bring each hero’s fighting technique from the movie onto the pages of the comic. The coloring has been a strong point for me in that it directly contrasts with the “darkness” of actions of the League.

Being the Batman fan that I am and with how much I enjoyed the standalone prequel comic, I know I would not mind a spin off series with Langstrom’s stories in Gotham. Seeing more Justice League stories from this alternate universe would require better villains and stronger plot lines. Overall, I am glad we got this prequel series and I will just have to cross my fingers for some more Vampire Batman.