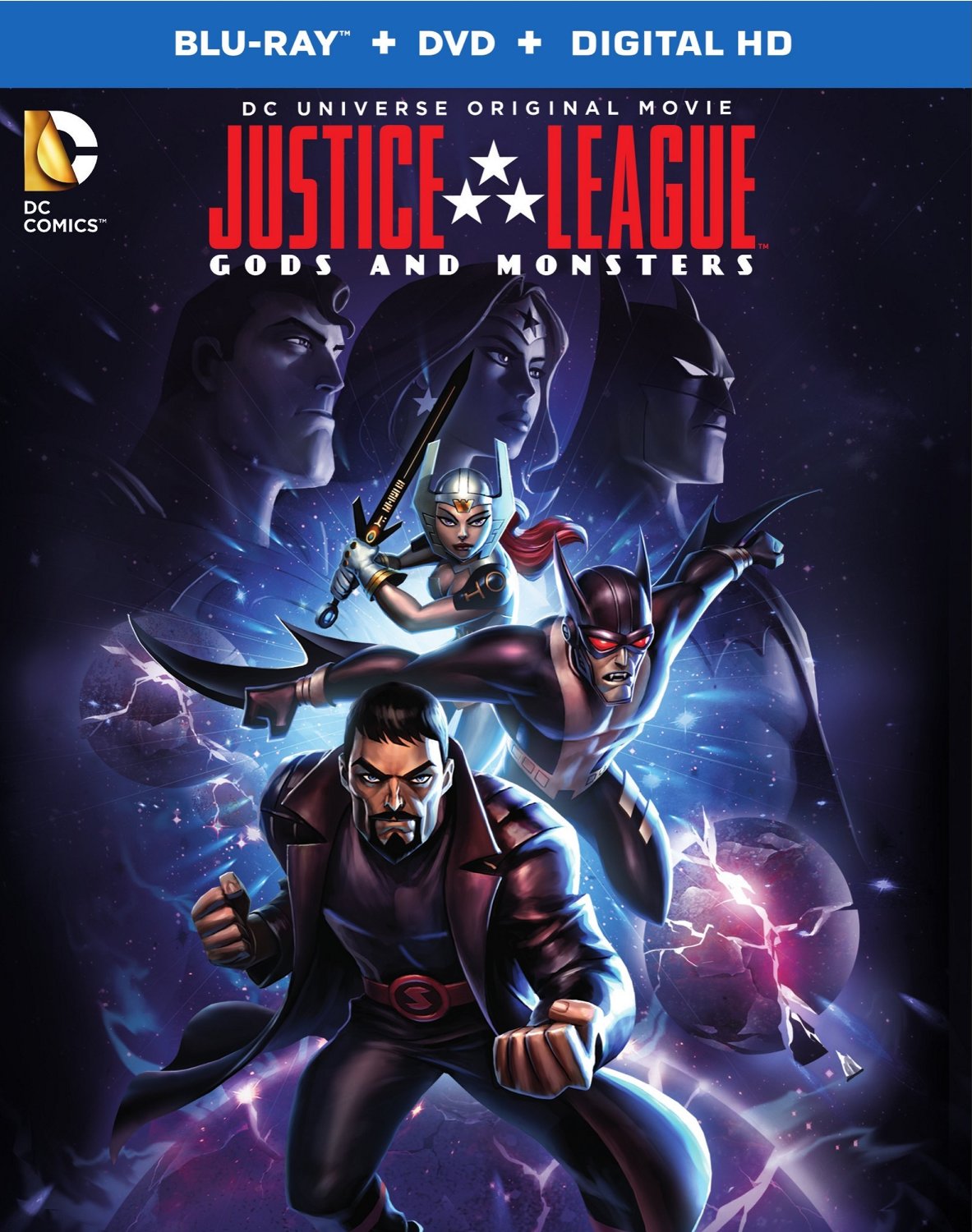 THE PLOT: In a divergent timeline where General Zod inserted his essence into the egg of the House of El, the DC Universe as we know it is completely unrecognizable. Superman, the adopted son of Mexican immigrants, keeps a loose grip on the future of America as leader of the Justice League-a trio of super-powered beings. Alongside Superman is Batman, former scientist Kirk Langstrom turned living vampire, and Wonder Woman-originally Bekka of the New Gods from the planet New Genesis. Together their violent struggle against the forces of evil has the world constantly second guessing the nobility of their true intentions. When beings seemingly from another planet cause a series of murders that are staged to frame the Justice League, Superman and the others must solve the mystery and clear their names before the world rips itself apart from an ingrown Civil War.

MY THOUGHTS: Coming from a series of rumors regarding Bruce Timm’s supposed return to the Justice League animated series, “Gods and Monsters” serves as the most original production from the shapers of the DC Animated Universe since Batman Beyond. Their personal take at the Tangent Universe concept, this iteration of the DCU is a violent, no-holds barred carousal of bad endings and dark characters that seeks to take the DC Universe concept and push it to its most uncompromising extreme. As a concept it’s interesting if not all that original. In terms of the execution, it’s spotty and in my opinion wanting for more. Gods and Monsters serves as a good introduction for a group of interesting characters that fails its new idea with a fairly meager story peppered with near-cartoonish violence.

At the end of the day I’m pretty sure I enjoyed the film, but that’s not without caveats. Right from the get-go this premise of a darker and more violent Justice League has, to my mind, been used and overused almost half a dozen times by this particular production team to the point where I feel their exuberance in telling stories with more adult oriented characters overshadows originality that those lighter boundaries would bring.

Going back to the very basic notion of a darker Superman, we start with the STAS episode “Brave New Metropolis”, then move on to the Superman series finale with “Legacy”, go to the Justice League season 2 episode “A Better World”, travel then to “Superman: DOOMSDAY” and even stop by at a glance at “Superman vs. the Elite”. Without even taking in similar stories such as BTAS episodes “His Silicon Soul”, “Never Fear”, and themes from JLU’s terrific Cadmus arc in Justice League’s fourth season. This is the sixth time this idea of a more mature take on Superman has been utilized. Frankly it’s worn thin by now. I understand that a god-like being serving as a planet’s protector is seemingly more interesting when he doesn’t immediately have the planet’s best interests at heart, but beyond the new origin there really isn’t that much different with this iteration of Kal-El from what we’ve seen before, whether he’s killing people or lobotomizing them. The fact that his character and origin is at the forefront of the story kind of puts into mind the idea that Bruce Timm really loves comics like Irredeemable, The Authority and Marvel’s Ultimates.

That’s all well and good, but I have to ask if the point of the differences in Superman characters is to be obviously different, what more can we as the audience gain from that? In doing this type of story again, Timm and Burnett took on a huge gamble in trying to give us something new through something we’ve seen before. Unfortunately for them, there’s really nothing of note that’s all that different from this take on Kal-El from the others besides the circumstances of his birth and upbringing. I quite like the fact that being raised by Mexican immigrants gives him a more focused, rougher perspective on the world as it makes total sense to me. He would be less nice to play with the U.S. government if he grew up under their heel like immigrants would. Beyond that however, we’re not shown too much of his personality other than the fact that he’s not as nice as Clark Kent. Any charm or personality stems from Benjamin Bratt’s dulcet tones, and that only carries so much for a seventy-two minute movie. Ultimately, when it comes down to it there’s not much I can say from the main selling point of the movie besides “Again?” when it comes to this type of take on Superman and the League.

This isn’t to say that they all are uninteresting, as I did like the Kirk Langstrom Batman character. His vampiric mood and cool monotone brought to life by Michael C. Hall was a hoot to watch. I really wasn’t feeling his backstory involving Dr. Will Magnus and his girlfriend/wife Tina, mainly because it went on too long. Knowing that his experiments made him into a Vampire rather than a Man-Bat doesn’t require a ten minute flashback, but the character himself was cool. He had the best introduction from the webisodes when he took down Harley Quinn.

However when it comes to origins, Bekka’s Wonder Woman by far had the best. It was already an interesting twist to make her a New God, so by essentially having her be the unwitting participant in a coup made her story tragic and different and new all at the same time. Beyond that there wasn’t too much to her character besides being sexually aggressive, which is another characteristic that this production group has employed more than once in the past. It’s not in itself a bad thing, but it does leave the character without much of a description besides “adrenaline junkie”.

Going back to the story, which for me was the weakest aspect of the film, there wasn’t much of one to get deeply invested in. We’re shown that the Justice League members aren’t evil but they will kill with zero hesitation, yet we’re not given much insight into their line of thinking. They dislike a world which hates them which isn’t unrealistic, and they think of humans as lesser than them. Yet they protect…them? More investigation into their thought process would’ve made this movie a lot more interesting. Basically they’re the good guys because that’s the premise of the movie, not any inherent reasoning beyond that. They don’t have any scenes of them admiring or liking humanity, so you can’t help but question why they’re called the Justice League in the first place and not the Justice Lords. We do see them save lives, try to save lives, but most importantly fail to save lives in what proves itself to be the grimmest and most violent exercise in DC animated storytelling to date.

Virtually every DC character save for President Waller and Steve Trevor get brutally murdered in ways which smack of almost salacious glee. I’m no real sensitive witness to gory violence in animated form, but there is something to be said about seeing these designs go through a type of Fist of the North Star take on fight scenes. An addition to stronger language used throughout, this is the harshest movie ever put out by DC to the point where it’s practically “R” rated. There’s legitimate gore in the way of dismemberment and decapitations that are shown on screen. It doesn’t make the film either good or bad necessarily, but it does impact the mood of the movie.

There are not really any likeable characters in the film whatsoever, and those who might be are either traitors or end up dead fast. As a result, the movie has sort of an unpleasant atmosphere that to my mind revokes investment in the characters and their story. Why care if you don’t like anybody? There’s no sense of the maturity that came with the darker, stronger elements of storytelling that the DCAU is rightly praised for, it’s just grim and grit for the sake of it. The film does end with Superman suggesting they not kill to which Batman blows him off, but why would Superman suggest it in the first place when nothing in the movie ever brought his thinking to that mindset?

Overall I do recommend the movie as something to be seen at least once. I sincerely hope to see these characters again in a better story. I like the general idea of these takes on Superman, Batman and Wonder Woman, but the film itself is not one of the better ones they’ve done. It’s a simple case of style over substance. Guess who wins in that match-up?

Justice League: Gods and Monsters is available now digitally and on DVD and Blu-ray.