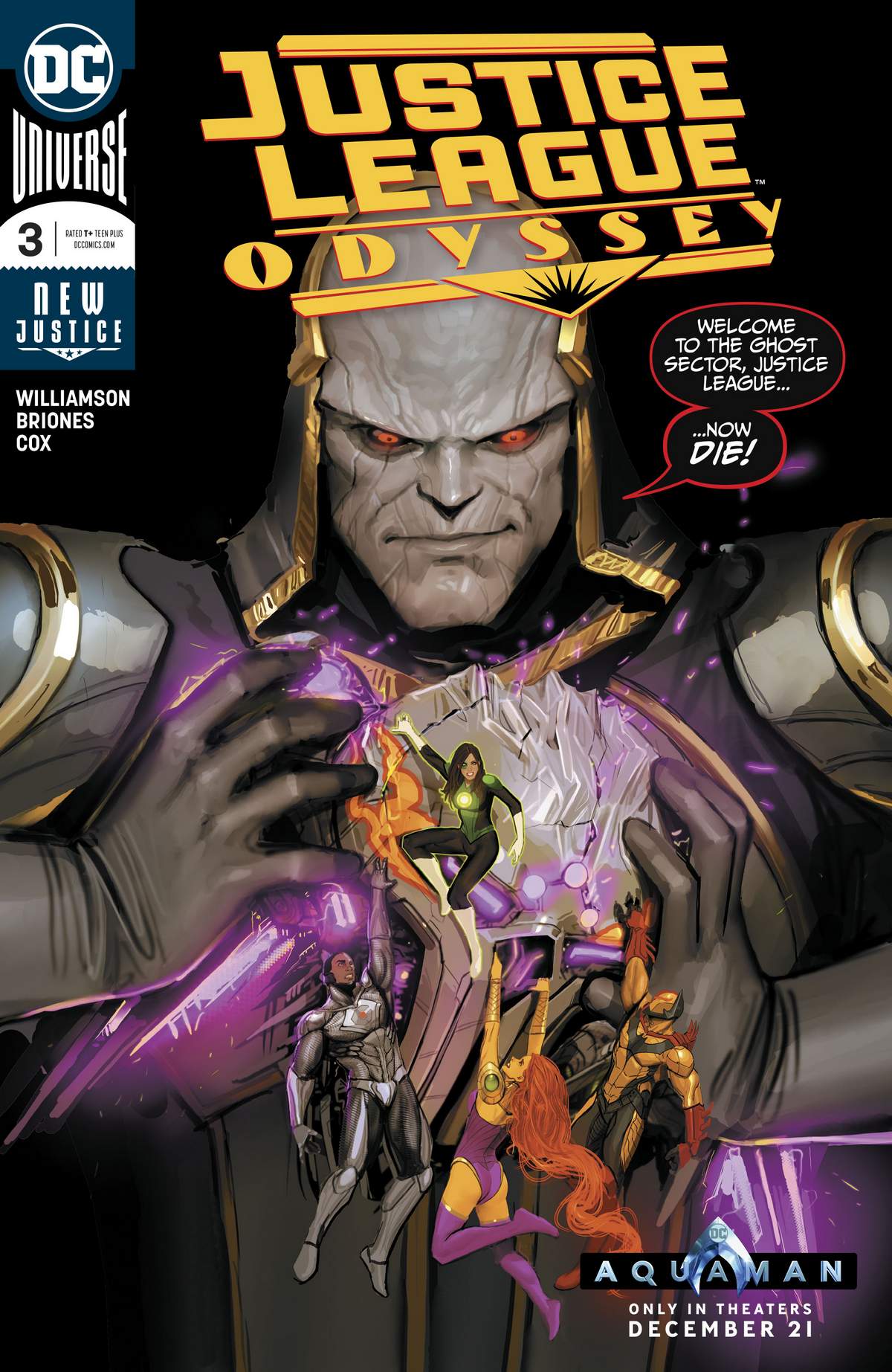 Overview: With Starfire overcome by an unknown cosmic energy, her de facto League teammates race against time, delving deeper into the Ghost Sector to find a way to help their comrade. Little do they know that already several of the Sector’s strange inhabitants have taken an interest in the heroes who look eerily similar to the Gods worshipped by their ancestors!

Summary (spoilers ahead): Flashing back to just before leaving Earth, the former Teen Titan teammates Starfire and Cyborg both find themselves compelled into space following different compulsions. They know that their actions now (stealing Brainiac’s ship from the League) will test the limits of their team’s patience and be difficult to explain. So each one is reassured by the other as they take off to follow different leads into deep space. Kory promises to protect Victor in space in exchange for backing her up in leaving in search of her homeworld.

Present day, Kory has absorbed more than just language from the priest at her statue. As cosmic energy roils throughout her body, threatening to turn her into a human bomb, it’s Victor who comes to her aid instead.

Cyborg has a possible solution to shut her down but it could be just as dangerous. However, if they don’t try something soon it won’t matter. Cyborg uses a concentrated blast from his sonic cannon hoping to disrupt the language center of her brain as well as most of the other functions. Nevertheless, the threat of imminent explosion seems to have passed. As usual, though, it’s out of the frying pan and into the fire for the crew.

As the temple begins to collapse around them, Jessica’s ring informs them that “planetary metamorphoses is underway,” which as far as the Leaguers are concerned translates to “the planet is coming apart at the seems.” Indeed, as the Leaguers race back towards Brainiac’s ship in a last ditch effort to get off-world, it’s increasingly clear that the planet is about to explode.

But Azrael still has the Multiversal Key secure (the one Kory found behind her statue in the temple) so they’re in relatively good shape, with one minor detail. Brainiac’s ship is still damaged from the crash. Victor tries to use the MotherBox to put things back together and get it off the ground, but as the planet shifts under the landing gear ultimately Jessica is the one who provides some extra boost with constructs from her Green Lantern ring.

Out in local space, the team looks back and discovers that while the planet has certainly come apart, some sort of force field appears to be holding the pieces relatively together.

Elsewhere in the Ghost Sector, a mysterious cloaked figure interrogates a local being who has experienced “visions of the Old Gods return.” Revealing itself to be called Rapture (apparently a servant of Azrael) it ominously exclaims that if Azrael is returning then war is certain to follow close behind.

With the ship held together literally by Jessica’s willpower, our Leaguers follow a dormant Coluhan signal picked up by the ship’s sensors somewhere deep in the Sector. Making planetfall, Kory is still injured and out of commission. Finally admitting they’re in no real shape to continue, the mission becomes find parts to fix the ship and then get Starfire home. Cyborg stays behind with Kory so Jessica reluctantly agrees to go with Azrael in search of the signal’s source, but not before first making him promise “not to be weird.”

While Cyborg and Starfire wait, something approaches the ship. A local creature appears who claims to know what is wrong with Starfire and how to help her.

Meanwhile, Azrael and Jessica encounter a being called Vulg who knows where to find the Coluhans and any tech they might have. But when he takes the Leaguers to see them, they discover Vulg has actually enslaved what is left of the Coluhan refugees on this planet and violently pressed them into servitude.

The horrifying scene sends Azrael and Jessica into JL-Hard Mode, but the slavers seem to be somewhat prepared for the backlash, even though when Jessica identifies herself as a Green Lantern Vulg claims never to have heard of the Galactic Police squadron.

Quickly realizing the depth of the situation, Azrael radios back to Cyborg hoping perhaps Starfire has recovered to some extent. But their plea seems to fall on deaf ears. Just as it seems the aliens have them completely overwhelmed, a completely powered-up Starfire and Cyborg appear over the horizon and Kory is in a mood to kick some ass.

From the edge of the skirmish, the strange alien medic watches Starfire’s recovery as well as the stylish teamwork the Leaguers display once they’re all in action. He chuckles to himself, pleased to see them working together, and just before teleporting away turns back into his true form. The Leaguers aren’t really paying attention to the edges of the battlefield and so they miss catching a glimpse of Darkseid dematerializing.

But it turns out they’re distracted with good reason. Vulg has escaped, but the now-freed Coluhans are chanting in unison, “All hail the machine!” Cyborg can only blink in surprise. As the issue closes, Vulg has contacted his master, Rapture, who is also looking for the heroes. In the distance behind Rapture lies a futuristic alien city. But the largest structure on its horizon is a statue of Cyborg.

Analysis: I’ll say this for Justice League: Odyssey, they’re are trying to do something different. That’s always tougher than it sounds. And with comics, it can be even harder than certain styles. Trying to put a team together that is more or less led by Darkseid, consisting of ex-Teen Titans and a former Bat is a crazy idea. I respect crazy. With the pieces they’ve got on the board as well as the backstory they’re building in, we could see some fireworks that might even have repercussions resounding across the DC Universe.

But this book has already lost one of its biggest stars: the artist. Briones work is pretty good but Stjepan Sejic is a tough blue chip to lose, especially because his last contribution is the cover. The style difference is jarring and Briones probably suffers in being compared, perhaps unfairly, to such a dynamic talent.

And word on the street is that’s not the last of the lineup changes the staff will undergo. Dan Abnett is scheduled to come on board after the 6th issue. Abnett garnered fairly significant praise helping to revitalize Marvel’s “Cosmic” line a few years back in the Annihilation era of Guardians of the Galaxy (before Star Lord took his mask off for obvious reasons) so the change might not be such a bad thing. But it doesn’t seem to signal a vote of confidence from editorial. One arc isn’t long enough to pull off what this book seemed to be leading up to. Just as these heroes still need to find a way to repair their ship if they’re ever gonna get home, it’s difficult to understand how the creative team is gonna stick a landing with what they’ve got left.

Final Thoughts: Cosmic stories are marathons not sprints, and there is a foundation that’s been laid here. Maybe Abnett and Williamson are in communication. If anybody knows how to pull an eclectic set of pieces together and cook up a weird, spacey gumbo, it’s Dan Abnett. But the bottom line is, the momentum this book had, got clotheslined this issue. For a book I had looked forward to this was a tough showing.