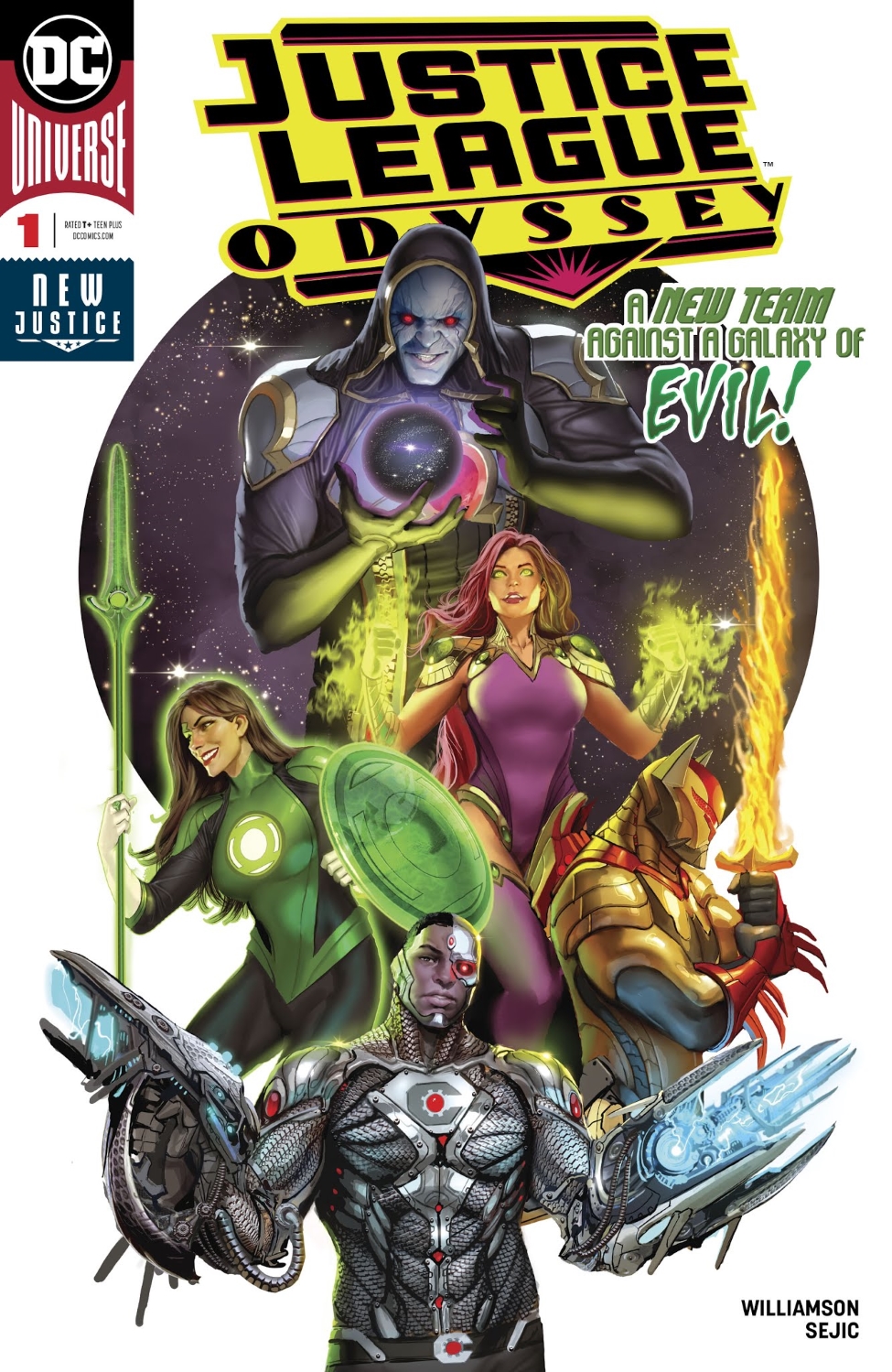 Overview: Jessica Cruz meets the surprise of her life on guard duty in the Ghost Sector: a rogue mission filled with her friends!

Synopsis (spoilers ahead): In the Ghost Sector, a realm of space crowded with worlds set free from storage on Brainiac’s destroyed homeworld of Colu (see Justice League: No Justice), the inhabitants of these worlds cry out to the old gods. One of those inhabitants, a former Green Lantern with an exhausted ring, tries to leave the sector to warn people of the reason why Colu stored all of these worlds in hiding, but she is caught and destroyed by a huge monster, and her ring shatters.

Alone on patrol outside of the Ghost Sector, Jessica Cruz, Green Lantern, talks to herself, worrying that she might be going mad by herself. Getting a call from her former partner, Simon Baz, but unfortunately for his lonely and bored friend, the Sector’s radiation cuts off their contact. Just in time, a strange spaceship shows up, and Jessica leaps to confront it, noticing in shock that it’s Cyborg and Starfire flying Brainiacs ship straight into forbidden territory!

As Victor struggles to control the ship with his Motherbox, Starfire tries to persuade him to leave and save himself, as she doesn’t want to risk anyone else’s life in her quest for Tamaran. Cyborg insists he wants to save the people who were left in chaos during the destruction of Colu as a result of the League’s destruction of the Source Wall (Dark Knights: Metal). Jean-Paul Valley, Azrael, a stowaway, enters the cockpit, telling them that they all followed a mysterious voice into the Ghost Sector.

Jessica orders Brainiac’s ship to turn around, but the radiation of the Sector breaks her ring-shield, and Starfire dives into the wild space to bring her aboard the ship. Though grateful for the rescue, Jess still tries to do her duty and arrest them all for violating the Guardian’s ban on travel into the Sector. Cyborg tells her they have to work together, as huge monsters are attacking the ship. Cyborg turns the helm of the ship over to Azrael, and Starfire gives Cyborg a huge jolt of her energy blasts to give him enough power to give the entire ship enough speed to escape the monsters and the space storm. The ship crashes, but Jessica keeps them safe with her ring bubble. She berates her friends for almost getting them killed AND breaking the Guardian’s orders. Cyborg tells her to leave since this is a rogue mission, not sanctioned by the League, but she says they can’t survive without each other. He explains that he needs to discover why Colu hid and stored all of these worlds, and he has no clue where they are right now. Starfire and Cyborg tell Jessica of the voice they heard, drawing them and Azrael to this chaotic space – but just as a monster attacks Starfire, Darkseid appears and saves her, declaring that it was his voice which drew them all to him. He reveals that somehow, the inhabitants of some of these worlds have developed a religion around Starfire, Cyborg, and Azrael, and he wants them to help him bring forth a new age of the multiverse!

Analysis: After two full months of delay, Justice League Odyssey is finally here! Stjepan Sejic’s gorgeous art and Joshua Williamson’s energetic writing immediately draw us into this wild, beautifully rendered world of neon-hued destruction. Sejic’s special skill of drawing incredibly appealing characters draw us into this desperate and disparate team of Cyborg, Starfire, Azrael, Jessica Cruz, and the shocking Darkseid. In contrast with James Tynion and Alvaro Martinez’s powerfully creepy Justice League Dark, Odyssey promises brightly hued adventure and team bonding from the start. All of the characters get moments to shine, and the strength of the relationships between Cyborg, Starfire, and Jessica gives a warm feeling to the entire book, even when Jessica is torn between her love for her friends and her duty as a Lantern.

However, since this is the Batman Universe, we want to highlight Azrael’s part of the story, as it is our link to Gotham. Williamson gives a quick history of his life as an assassin trained from childhood by the Order of St. Dumas (Batman and Robin Eternal/Sword of Azrael, depending on your preferred continuity), and includes his always-shaky mental state as a foundational part of his characterization.  Sejic beautifully renders the Alvaro Martinez-designed AzBats suit (Detective Comics: Intelligence) a classic Knightfall flavor with more red highlights and decreased black paneling. As a side note, Sejic joked on Twitter in response to rumors that he was angry about the delays on the book caused by a too sexy portrayal of Starfire and Jessica that the real hottie of the group was Jean-Paul, releasing this image: The final depiction of Azrael, though perhaps not as blindingly gorgeous, still has the beautiful flowing locks and fine features. And best of all, Williamson loads his dialogue with references to his history, all delivered with Azrael’s bombastic style – “I am the AVENGING ANGEL. The AGENT OF THE BAT. You may call me Azrael. My faith will guide us to salvation.” Such love for Azrael’s long, often troubled history in comics brings a huge smile to this reader’s face.

The revelation by Darkseid that Starfire, Cyborg, and Azrael are all gods promises so many wacky and wonderful storylines to come!

Final Thoughts: Williamson and Sejic bring the long-awaited Odyssey to the starting line with wild, beautiful art and energetic but rooted storytelling.