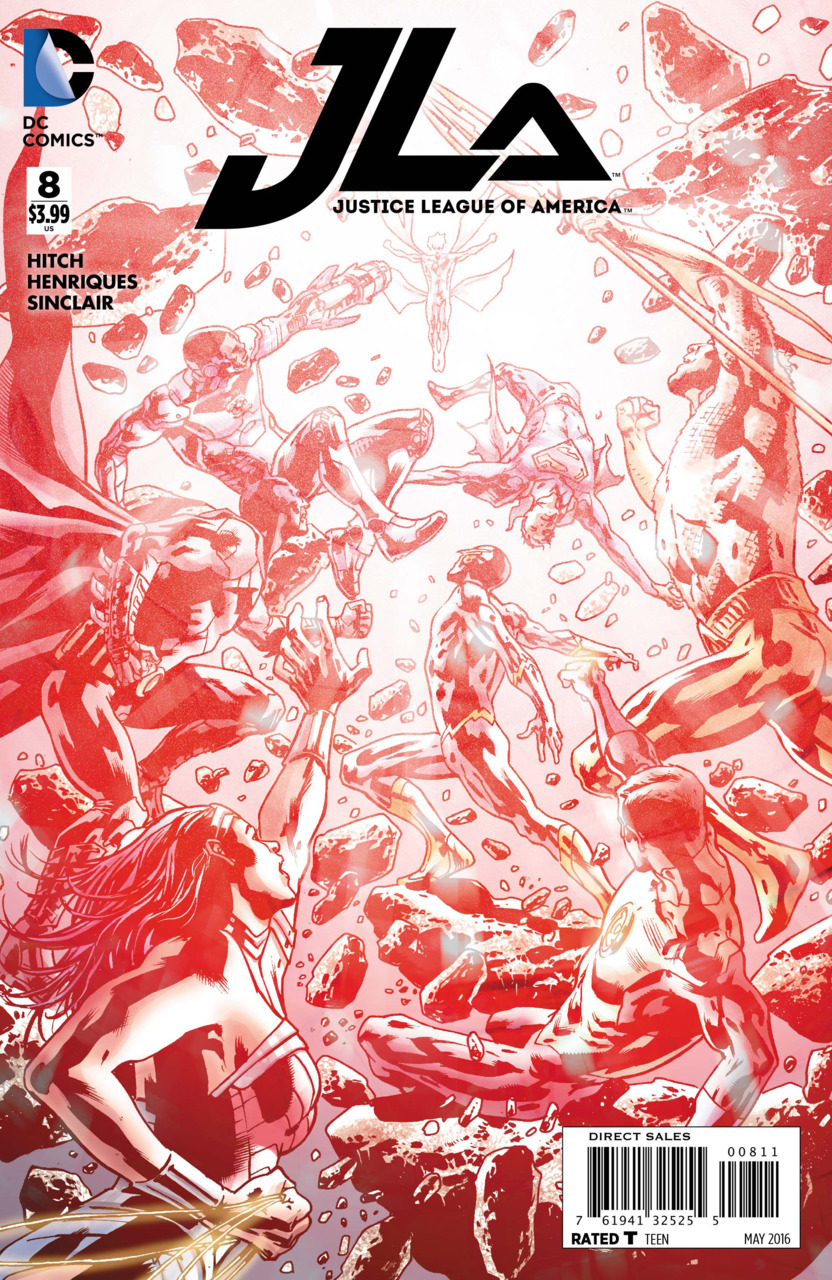 Synopsis: Picking up on the moon near the remains of Rao’s demolished cathedral, Superman and Rao duke it out for nearly four wordless pages. It appears that Superman flies Rao into a mountain range back on earth.

Majorly fatigued, Superman struggles to get to his feet while Rao stands tall and proud. Rao informs Superman that while he’s definitely hurt him, while he’s on earth, he is empowered by his millions of followers. He continues, stating that what he just did to him, Superman ultimately did to his people. Crushed after realizing the damage he just caused, Superman hesitates to fight back while Rao takes advantage of the opportunity.

At the Foundry in Metropolis, Cyborg works with his father and Anisa Williams to restore some sort of systems up conveniently where Superman and Rao are fighting. Cyborg states that Batman is inbound with “the package.”

As Rao continues to boast of the damage he is doing to Superman’s body, Aquaman stabs him in the chest from behind with his trident. He, then, quickly throws him a great distance off of his triton. Immediately Wonder Woman leaps towards Rao and stabs him in the chest with her spear. Superman gasps for enough breath to tell Aquaman why they must stop attacking Rao. As Aquaman yells this news to Wonder Woman, Rao uses his heat-ray to blast Wonder Woman on her back. She, then, jumps in front of Superman and Aquaman to block Rao’s heat-ray with her shield. Her and Aquaman ask Superman if he has a plan.

We see that one hour before in Rao’s Cathedral, Clark received a transmission from Bruce with Cyborg. The two of them requested that he buy them one hour because they needed time to execute their plan.

Flashing to present time, Batman and Cyborg initiate a Boom Tube which takes all of them to the new power plant in Metropolis. Immediately, Parasite (who Batman agreed to use) jumps on Rao’s back and continues to suck energy out of him as he rapidly grows in size and power.

Eventually taking energy from Rao and Superman along with the quick appearance of the Flash (no pun intended) paired with the infinity stones, Parasite strips Rao of his followers. Somehow, Rao walks away and finds other infinity stones in which he appears to recharge. Meanwhile, most of the League gathers defeated around a dead Superman.

Art: The art once again is this book’s strong point. I personally find Hitch’s art more favorable than his writing but that may just be me. Daniel Henriques’ inks are nearly flawless coupled with Alex Sinclair’s superb colors. A panel worth mentioning is featured a couple pages into the issue. Sinclair’s colors both literally and figuratively shine as Superman uses his heat-ray vision on Rao’s face.

Aside from these noteworthy components of this issue’s art, there are still a few flaws. Within a handful of pages in the middle of the book, there are two instances when Rao is stabbed. First, when Aquaman pierces through Rao’s chest with his triton, it appears as if the triton did absolutely no damage to Rao even though he is clearly in pain and the trident is evidently stabbing through his chest from behind. A couple pages later, Wonder Woman stabs Rao with a spear. However, this instance even more so than the previous looks horrible. At first glance, it appears as if Wonder Woman is poking Rao with a stick. I had to look back a panel to realize that she was clearly stabbing him (with an awfully drawn Gilbert Gottfried-face) with a spear and that that spear is now in his chest. You’ll be happy to know that neither of these stab wounds are evident going forward in the issue.

Final Thoughts: This arc continues to feel incredibly packed and drawn out. When the Flash showed up, I realized that I hadn’t noticed his absence from this issue. In regards to Green Lantern, either Hitch has forgotten about him or he has no idea how to utilize him. Hopefully, this isn’t what we’ll be getting when Hitch takes over Justice League in Rebirth but I unfortunately doubt things will improve enough. The art is the main positive to this whole series although there are random instances that simply come up sloppy and lazy.

Part of me thinks that years from now, I’ll pull these issues out of my long box, reread them and actually enjoy them. But for now, as long as I still am somewhat calloused by the seemingly inevitable delays of Hitch and Co., I await the day this series is over.