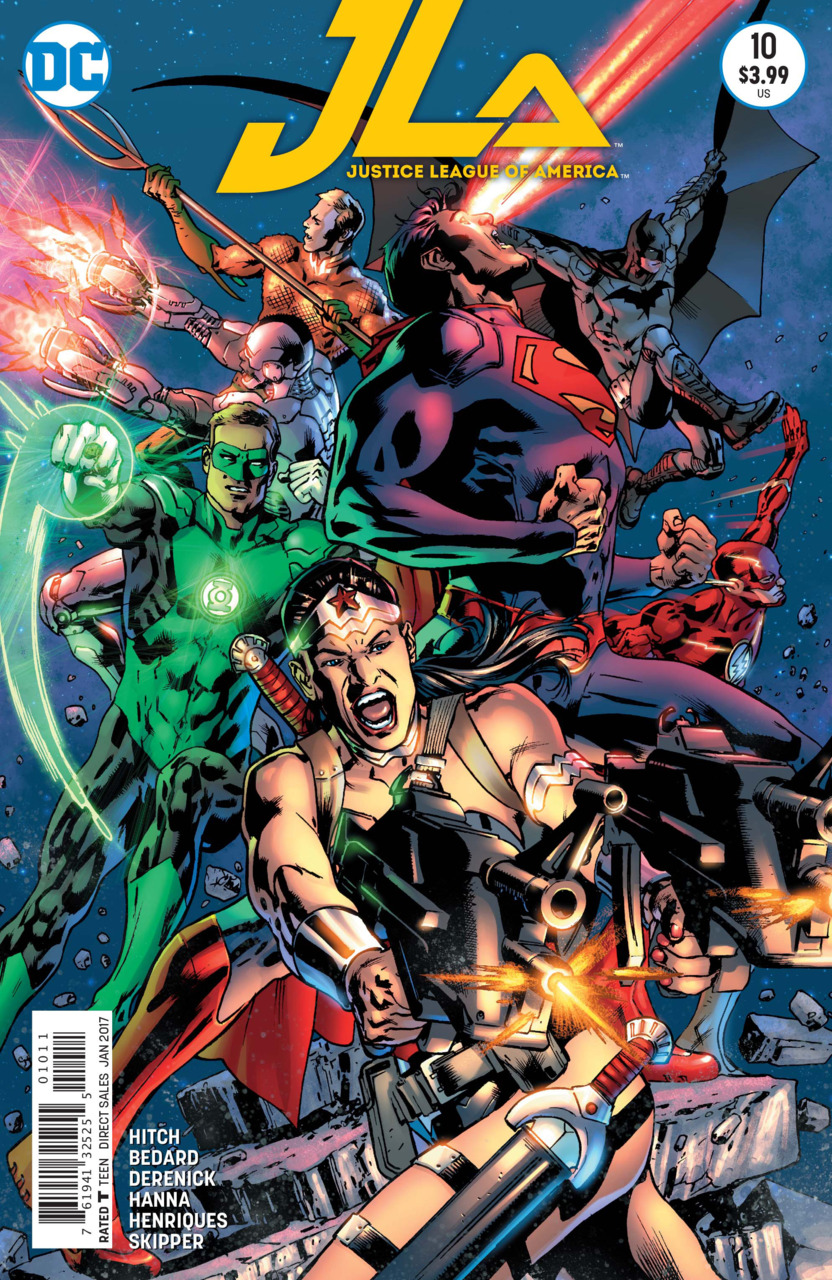 “Power and Glory: Part Nine” opens with Hal erecting a construct barrier around ancient Krypton as it orbits the modern day Earth. The ring warns Hal that the barrier may be unsustainable and it is being attacked by 250,000 Kryptonian warriors. Hal chides the ring about nagging him and he requests the ring to locate the Justice League.

Hal rejoins his comrades and explains to them that he was held captive on ancient Krypton and now the Dwalu warriors are pounding on his shield. These warriors are following a guy called Rao. Diana interrupts him saying that they stopped him from taking Earth. Hal reports that he is in control of alien stones that can control time and he now has brought the entire planet of Krypton to Earth.

Superman rallies the League saying that they are the only thing standing between Rao and Earth. Batman asks Cyborg if his father has come up with anything on the Kryptonian Protocol files he gave him. Cyborg contacts Dr. Stone. He reports that they are about to launch the countermeasures he developed from the files and they will be at the League’s location in 30 seconds.

The warriors breach the shield and begin their assault. Wonder Woman, Superman, and Green Lantern fly up to meet the attackers while Flash and Aquaman will deal with the attack from the ground.

The Infinity Corporation huddle together, relying on Jane to protect them. Dr. Stone sends two suits, one for Batman and the other for Cyborg. They were custom made for them and all they have to do is think and fly. The two suits are not the only thing Dr. Stone sent, he sent a squadron of drones to join the fight. The suits fire red solar radiation and synthetic kryptonite was made from Superman’s own blood. The five members of the League and the drones attack the Kryptonians in the air.

The initial attack goes well, but some do make planet-fall and they are engaged by Flash and Aquaman.

On Krypton, the old ruthless Rao is still conversing with his younger counterpart. The two take off for Earth.

The battle turns as the Kryptonians become more accustomed to their new powers and they find they are better able to withstand the attacks of the League. Flash and Aquaman also start having difficulties against the landing warriors. Batman says that they need to rethink their strategy. Superman directs the others to attack Rao himself, he is the Dwalu’s power source. Batman calls Cyborg, he has an idea.

The Infinity Corporation soon finds that the warriors are attacking them. They ask Jane if she can handle that many. Batman and Cyborg attack the warriors from behind. When they land Batman asks Vincent about the time travel capabilities of their building. Vincent talks about the Forever Stones and Batman asks if he can regain control of the stones. Vincent asks if Batman wants to send Krypton back and Batman says no, he has something bigger in mind. Vincent says that he can talk to them and try to persuade the stones to help which causes Batman to say that he had better be more persuasive with them than he is being with him.

Batman asks Cyborg to open a Boom Tube to Krypton and the two of them with the three Infinity Corporation members run through it as Aquaman provides cover.

The travelers arrive on Krypton and Cyborg places Alexis in his Mech Suit as the gravity is too heavy for her. Batman notices that Vincent and Jane are not affected and he says that later he wants to find out what they really are.

Batman and Cyborg provide cover as the warriors who remained on Krypton attack allowing the three others to reach the stones.

On Rao’s return, the civilians swarm him asking him to bless them. Superman breaks through to attack the Raos. Superman arrives and the older Rao approaches him to talk. Superman notices the younger Rao and asks him if he is proud of his legacy.

On Krypton, Batman and Cyborg become overwhelmed as the Infinity Corporation pleads with the stones to help. The stones respond and Batman arrives to ask if it worked. The result is the yellow sun of Earth turns red. The Dwalu fall from the sky and Batman intercoms reporting that the Infinity Corporation has commandeered the stones and the sun has now been aged to red. The older Rao screams that he still can drain the life forces of his Dwalu warriors and fight Superman. Superman turns just as the younger Rao beheads his older version. The League arrives as Rao says that he will return Krypton to its own time and there he will teach the Kryptonians how to live.

On Krypton, Jane asks Vincent if he was wrong about the stones’ prophesy of the death of Superman. Vincent says that the prophecy was not wrong, Superman will die but he will be replaced by another Superman, an awakening and a new crisis. All alluding to the Rebirth age of the DC Universe.

We close with Diana and Clark hugging while Flash, Hal and Aquaman look on.

This issue was just okay. The entire issue was the final fight with Rao and was used to close up all the loose ends of this arc. Green Lantern rejoins the League with his beard intact and the League wind up victorious in the end with the ominous prophesy of the death of Superman that we started this arc with.

I was not impressed with he art of this issue. Hal does not look good in the panel showing him firing construct rockets at the Kryptonian warriors.

This issue was basically one large fight scene that did have some good points. The League fought as a team which I like to see. Batman is shown to be the master tactician and the man with the plan that is fun to watch.

Overall the issue was okay, the art was a little wonky and I felt like the story was too easily wrapped up.