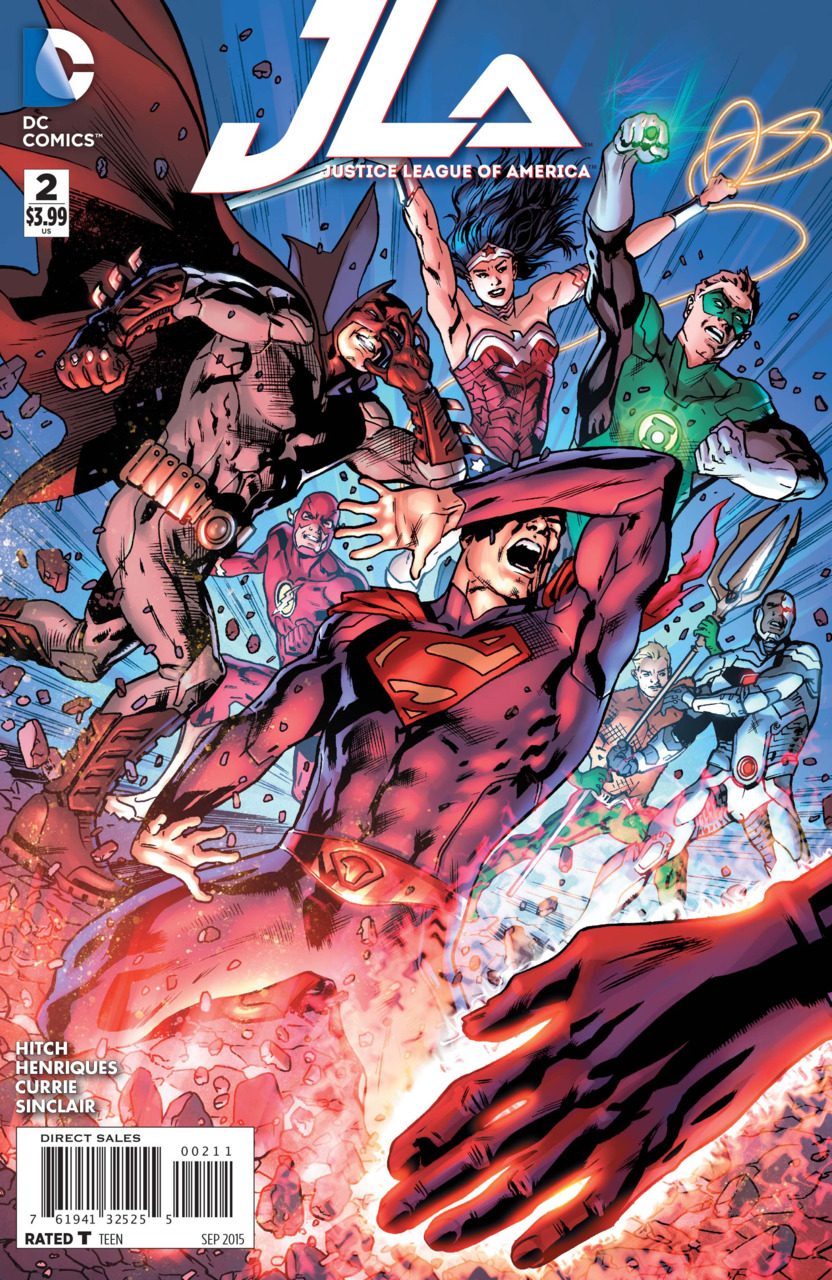 Opening where the previous issue left off, the Kryptonian God Rao has arrived on Earth. As Superman goes to greet him, a brief touch sends the Man of Steel plummeting to the ground. As Cyborg wonders whether they should try do something, Batman states that he will be fine…plus it will be interesting to see how big of a crater Superman will make. However, Superman is caught at the last second by Rao himself. As Superman comes to, Rao states that his “grace” was too powerful…he also asks Superman if he will help him save the people of Earth.

As several news bulletins begin reporting about the sudden appearance of Rao’s ship and Rao himself, we are treated to several witnesses who state that the energy emanating from the ship has begun healing people. Meanwhile in Atlantis, Aquaman is approached by one of the prophets of Rao who wants to try and sway the Atlantean people into believing in the God from Krypton. Aquaman doesn’t think this will work, but allows the prophet to try.

Back in the Batcave, Cyborg and Batman arrive and begin discussing the recent events surrounding Infinity Corporation, the various invitations sent to the Justice League and the battle against the Parasite. Batman comes to the conclusion that something sinister might be behind the strings attempting to manipulate them. They also discuss the disappearances of Flash and Green Lantern (possibly transported to Oa during the battle) and the missing Wonder Woman. At one point, Batman tells Alfred to prepare the “Kryptonian Protocols” and informs Cyborg that it is something he had prepared in case Superman ever went bad. Stating that he is always prepared, Batman says that they need to be ready to take down Rao if need be.

As Superman begins bringing Rao around the world to meet the various world leaders, we learn that Rao is planning to meet with all of them at some sort of summit. Superman eventually addresses the assembled press and populace and tells them of how Rao helped to save the people of Krypton and advance well beyond their years. Rao then speaks and tells how he can help the people of Earth, he then states that his prophets would now be heading out to various hospitals and heal the sick and dying. After the conference is over, Superman and Rao meet again and Rao seeks forgiveness from Superman for having not rescued Krypton before it was destroyed.

Cutting back to the Batcave, Alfred reports to Batman that Rao’s prophets are slowly healing the entire planet of their ailments…and the two have a brief conversation about certain people who may not deserve to be saved. Batman even states that if someone were to come to save Joe Chill, he would do everything in his power to stop them.

As the issue closes, Superman is seen flying over the streets and his voice over appears to be attempting to contact Diana…wherever she is. The last few panels show Wonder Woman awakening amid a scene of massive destruction surrounded by the ruins of Mount Olympus.

Well not too much to discuss in this issue, mainly we are introduced to the possibility of a God that seeks to save Earth – too good to be true, right? Well, let’s just say that if that was true…this would be a VERY short story arc. So we can only assume that Rao definitely DOES NOT have good intentions towards Earth.

As an issue that spent almost its entirety showing how awesome and benevolent and important that Rao is, it was almost like a giant, flashing arrow pointing at him saying “big bad!” Not sure if Rao is working alone or if there is more to his plan, but something doesn’t sit quite right with this literal god from the clouds that has arrived to save the planet…seems a little too convenient.
As Batman states, someone seems to be setting up or testing the Justice League…first they release Parasite and then had deliver invitations to have the League recapture him and have him sent back to the same prison that he broke out of. Then, a God of Krypton suddenly arrives claiming to be able to save the planet…again, way too convenient. My only concern is that I don’t think that Rao and the Infinity Corporation are connected; maybe Rao has some evil accomplice?

Overall this was a pure setup issue to lure the reader into liking the God of Krypton, but this only seemed to raise several red flags for me. I did like how Batman and Cyborg are continuing to investigate what may be going on, and I love that Batman is fully prepared to take on a Kryptonian if need be. I am wondering if maybe Rao will somehow convince Superman to fight on his side against the Justice League…maybe we’ll get to see the Man of Steel vs. the rest of the League? Also, where are Flash and Green Lantern? Really missed them in this issue, and I hope that we get to see what happened to them next month. Lastly, it looks like someone took out the Gods of Olympus as Wonder Woman awakens amid the destruction that was their former home…wonder who managed to pull that off?